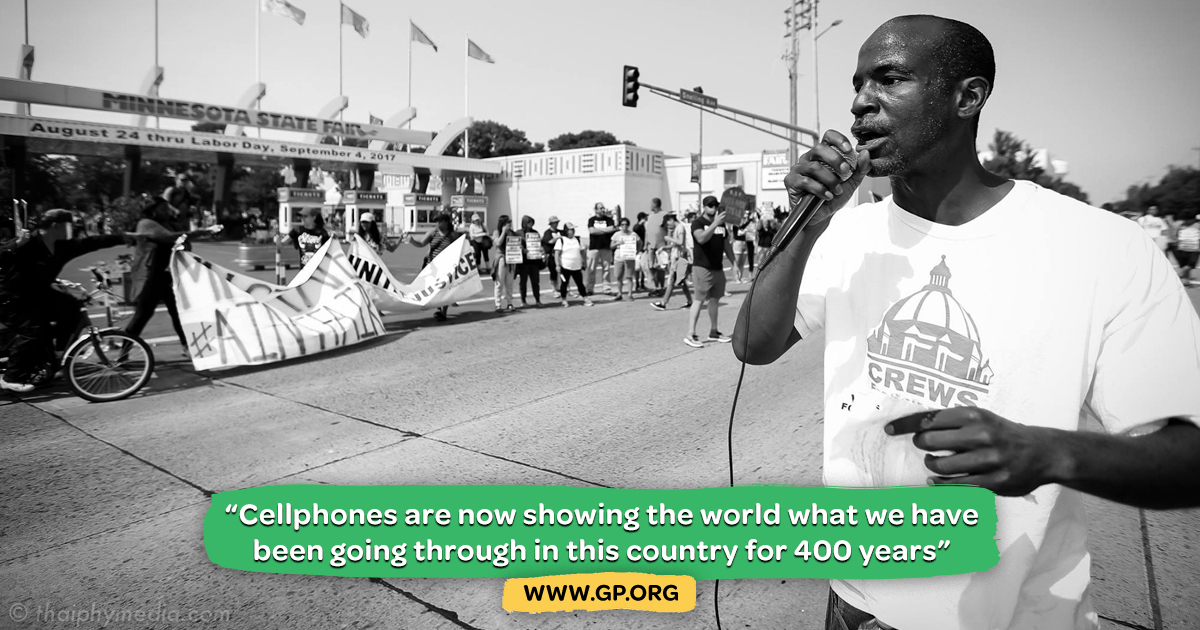 Black Lives Matter spokesperson and Green Party Steering Committee co-chair Trahern Crews tells us about Minneapolis, the US city that has become a symbol of racism, police brutality and inequality.

George Floyd, the African-American man who was killed in brutal fashion by police performing an arrest, quickly became a symbol of the oppression and violence suffered by people of colour in the United States. The pain and anger of thousands burst forth in Minneapolis. Day after day, fires burned in protest and anger over a murder that will leave a mark on the city's memory. Demonstrations were soon taking place all over the country, in dozens of major cities – including Los Angeles, New York and Detroit – as well as hundreds of smaller cities and towns. In Detroit, a 19-year-old man who was taking part in the protests was killed as a car pulled up and fired shots into the crowd. Three more people lost their lives in similar circumstances elsewhere, and a curfew was imposed on 25 major urban centres. These kinds of numbers hadn't been seen since the aftermath of the assassination of Martin Luther King, in 1968.

Why is this been happening in the country that sees itself as the "world's greatest democracy"? In fact, George Floyd's case is far from unusual. It can best be described as the straw that broke the camel's back, an event that opened the floodgates and let the rage and indignation of an oppressed people spill out. The killing of black people at the hands of the police is a regular occurrence in the United States: just as the tragedy was taking place in Minneapolis, Tony McDade, a black trans man, was fatally shot by police in Florida.

Although the problem exists all across the United States, Minneapolis is a city that represents the situation better than most. In 2019, it was ranked as the 4th most dangerous metropolitan area for black Americans. The city presents genuine cases of segregation and ghettoisation, with skin colour being heavily stigmatised.

"Being a Black person in Minneapolis, whose ancestors descend from slavery, means we are 10 times more like to be pulled over by police or killed by the police than our white counterparts," explains Trahern Crews, a spokesman for Black Lives Matter in Minnesota. "Not only are these systemic issues rooted in racism. We have the biggest economic inequalities and the biggest wealth gaps between whites and blacks in America. We have the biggest healthcare gaps, housing disparities, et cetera. This makes it easier for the police to harm us without being held accountable".

George Floyd is just the latest in a long series

Historically speaking, policeman Derek Chauvin's knee pressing down on George Floyd's neck for nine minutes, slowly killing him, is nothing new. What's new is that technology is leading to more and more of these violent incidents being documented. "Things like this have been happening to Black people in America for 400 years," says Crews. "The invention of the cellphone camera has been such a powerful tool in the fight against police brutality and institutional racism. It is now showing the world what we have been going through in this country for 400 years".

George Floyd is the fifth person to have died at the hands of police in Minneapolis since 2017: in four of those five cases, the victims were black. The same thing had happened to Philando Castle in 2016 and Jamar Clark in 2015. Investigations into these killings have ended either with acquittals or, at best, with officers being fired. The only case that ended in a conviction involved a black officer, Mohamed Noor, who was sentenced to 12 and a half years in prison. In the city, only 1 per cent of complaints relating to police abuse have led to a conviction since 2012. Furthermore, over 60 per cent of victims of police shootings in Minneapolis between 2009 and the end of May 2019 were African American.

Adequate measures have never been taken

In the past, Chauvin had already received several complaints about his violent conduct and was involved in shootings of suspects. However, none of the complaints led to disciplinary action. Tou Thao, one of the agents present during Floyd's arrest, also has a troubled past. These facts provide further confirmation of the Minneapolis Police Department's reputation for racism. What's more, during the protests a black CNN journalist was arrested live on air, and videos emerged of police shooting at people's windows. "There has never been a move to democratize the city police because of the local police union's strenuous opposition," states Crews.

"There are things Black Lives Matter Minnesota believes would make the Minneapolis Police Department more accountable and Democratic – says Crews – starting by renegotiating the contract between the City of Minneapolis and the Minneapolis Police Federation. In 2016, CUAPB (Communities United Against Police Brutality) created a ballot initiative that would require all police officers to carry personal professional liability insurance so taxpayers don't have to pay for police misconduct. The city council blocked it from going on the ballot, which was very undemocratic because the required amount of signatures had been collected for it to be considered in that election year. Further measures include ending the 10 grant programme and creating a national police misconduct database, so that rogue cops can't move to other states, join another police force and continue to terrorise Black American citizens".

The knee-on-neck choke has been used before

Among the many delicate topics brought to light by recent events is the knee-on-neck chokehold that led to George Floyd's death. Minneapolis police officers are allowed to use this tactic to make a suspect that is actively resisting lose consciousness, and if a situation is particularly critical even using lethal force is permitted. This is exactly what happened to Floyd, even though videos show that he wasn't presenting any kind of resistance. The New York Times described the episode as an example of "street justice", a phenomenon – disturbingly prevalent in the US – where a police officer punishes a suspect for their attitude, as a sort of lesson to avoid that behaviour in the future.

The fundamental problem with police violence is the ample scope for action that officers are given, such as in the case of chokeholds. Reports from the Minneapolis Police Department highlight that in 2019, this potentially deadly approach was used in 56 occasions. In most of these cases, the suspects were black, even though African Americans make up just one-fifth of the population. It seems like no coincidence, therefore, that Bob Kroll – President of the Police Officers' Federation of Minneapolis – wore a "white power" patch on his jacket.

The problem in Minneapolis, and the United States more generally, is twofold: racist discrimination against suspects, and endemic police brutality and legalised violence. To paraphrase Teresa Nelson, Legal Director of the Minnesota ACLU branch, it can be said that while in George Floyd's case officers breached internal regulations, the real issue is that those same regulations enable officers to render suspects unconscious without much thought

"The video of Floyd's death is horrific but not surprising; terrible but not unusual, depicting a kind of incident that is periodically re-enacted in the United States," writes Jelani Cobb in the New Yorker.

American history coincides with what is being highlighted in Minneapolis, showing that these kinds of incidents happen with alarming frequency. There have been times in the past when the public has made its cries of protest heard, but all too often these events are kept quiet, hushed by the same institutions that enact violence against their people. In 2019, police in the US killed 235 black people and 370 white people. If only unarmed killings are considered, the number of black and white deaths is equivalent. This is in a country where African Americans represent only 13 per cent of the population, a fact that starkly highlights how much more likely it is to be killed by police if you're black.

Today, George Floyd has become a symbol. And even this is no coincidence. It's because of the context in which his murder happened. Because of the brutality of the images of his death, the unfiltered truth about a reality that has always been there but has been hidden all too often. It's also connected to this very particular moment in history: the coronavirus pandemic has brought to light, more than ever before, the social and economic inequalities that exist in countries all over the world. Many have noted that the virus hit harder in the US and disproportionately affected African Americans with mortality rates in black communities three times higher than in their white counterparts.

The death of a black man at the hands of the state, in that place, at that time, in those circumstances, is the spark that ignited a fire in a community already scarred by tensions, uncertainty, rage, and pain. Minneapolis and its troubled past are just the tip of the iceberg and police brutality and institutional racism are coming to light more and more every day.