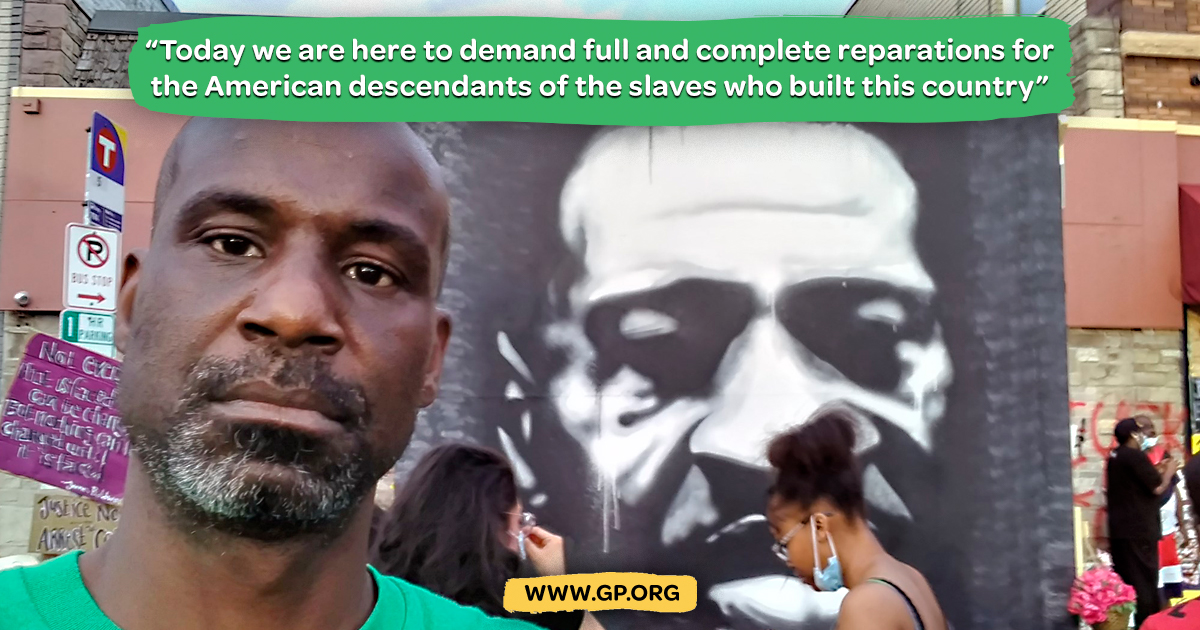 ST. PAUL, Mn. — Minnesota's Black Lives Matter chapter took to the state Capitol on Friday to mark Juneteenth with a demand for reparations and real police reform in a continued push for racial justice following the death of George Floyd.

Amid chants of "Reparations now" and "Cut the check," Black Lives Matter organizers and several other activist groups called Floyd's death a remnant of slavery's legacy. Floyd, a Black man in handcuffs, died after a Minneapolis police officer pressed his knee into his neck for nearly 8 minutes, ignoring Floyd's cries of "I can't breathe".

"For 400 years, the United States government has had its knee on the neck of the black community socially, politically, economically and spiritually," said Trahern Crews, a leader of the Minnesota BLM chapter and organizer of the event (Crews is also a co-chair of the Green Party). "Today we are here to demand full and complete reparations for the American descendants of the slaves who built this country."

The issue of reparations resurged last Juneteenth, when a U.S. House Judiciary subcommittee held a hearing to examine the legacy of slavery and a possible path toward reparations. Several 2020 Democratic presidential hopefuls expressed support for the idea.

Along with demands for reparations, the hundreds of demonstrators at the Capitol chided lawmakers for not agreeing on police reform legislation. The Democratic-controlled Minnesota House passed a broad package in this week's special session that went beyond measures approved by the Republican-controlled Senate, and there was no indication the two sides would come together ahead of adjournment.

"Right now while we're standing on this lawn, their principles across the street at the Senate is to not pass any police accountability measures," said John Thompson, a state House candidate and friend of Philando Castile, a Black man who was killed by a St. Anthony police officer in 2016.

In addition to the rally, a handful of celebrations and demonstrations were planned over the weekend, including multiple cookouts throughout Minneapolis on Friday and a run on Saturday in honor of Floyd that starts and ends at 38th and Chicago, the site of his death.