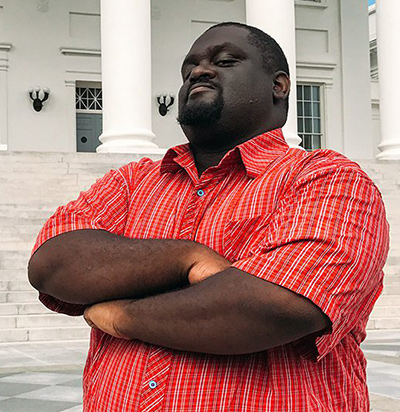 Montigue Magruder is a Virginian native that was born in Charlottesville and has lived in Richmond since he was 10 years old. He graduated from Armstrong High School in 2006, moved to Charlottesville for a year, and returned to Richmond after living in Morganfield, KY for Job Corps. Montigue has worked as a general labourer and caretaker for 6 years. He currently works part-time as a scooter mechanic and fry cook.

His political inspiration came to him in 2010 when he spoke in opposition to fare increases on Richmond’s public transit system. That event lead to him joining the Richmond Transit Riders Union, VA Organizing, RePHRAME, and the Industrial Workers of the World. Working with those organizations cultivated Montigue’s philosophy of everyone living a life of dignity and love from birth until death. As such, his political advocacy continues to centralize around the issues concerning “the least of these” in society.

In 2012, Montigue was appointed to the GRTC & Transit Study Task Force and wrote 5 of the 11 recommendations submitted to Richmond City Council. He ran for Richmond City Council in the 2016 Election and came in third place with 13% of the vote. He then realized that the issues he wanted to address required action by the General Assembly. Compelled by the appalling actions of the General Assembly, Montigue decided to run once more for the House of Delegates.

Montigue’s struggles with poverty, homelessness, incarceration, and surviving domestic violence led him to realize that the world shouldn’t be the way it is today. Those struggles compel him to do his part to ensure no one else lives the life he has endured. With your help, Montigue will be able to Build the Greater Good for fellow Virginians. If you recognize that the salvation of our state (and perhaps the world) is bound with his, let us go together and help Montigue (and candidates like him) begin the advancement of true justice and liberation!