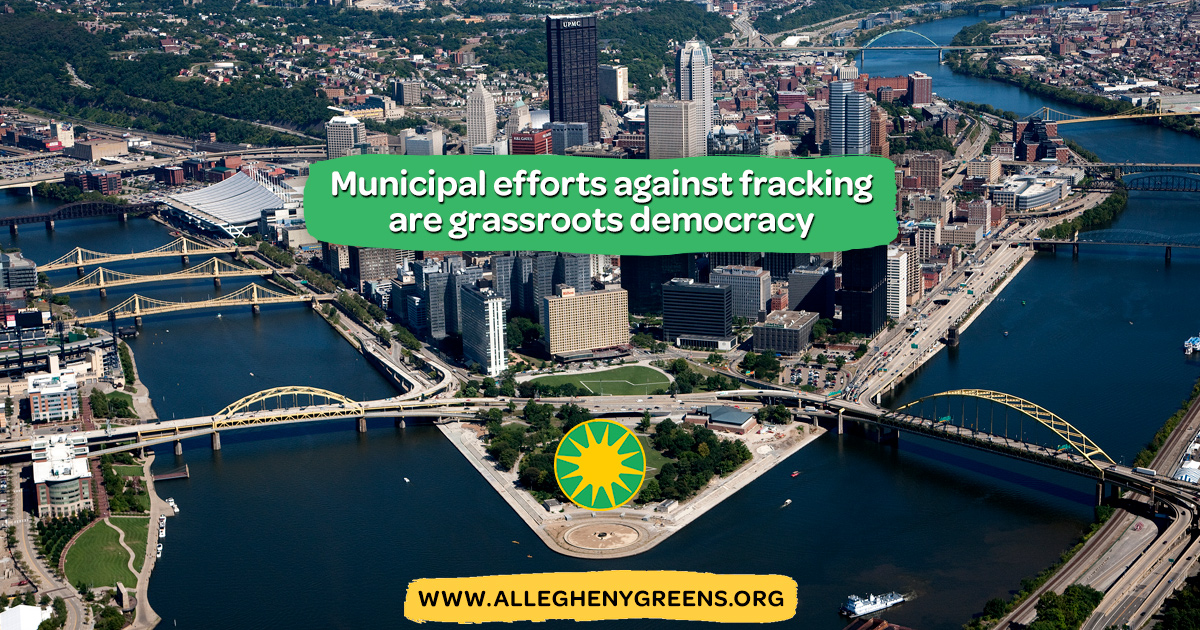 PITTSBURGH – On October 30, Pittsburgh Mayor Bill Peduto surprised many of us by finally opposing the petrochemical build-out in western Pennsylvania publicly -- although he was careful to oppose only "additional" development and not the Shell "cracker plant" currently being built in Beaver County. Allegheny County Executive Rich Fitzgerald's response was a very heated rant in favor of fracking and the petrochemical industry. Fitzgerald talked about natural-gas-powered cars, implied plastics are inevitable so should be made here, and demonized a general anti-fossil-fuel stance as "far left" and unreasonable.

The lack of leadership from elected officials against today's fracking and pipeline projects is resulting in residents taking matters into their own hands. As reported in Green Star #1 (October 21), residents of Grant Township are currently opposing a PA Department of Environmental Protection (DEP) lawsuit that was initiated to protect oil and gas profits. The lawsuit stems from township residents establishing a "home rule charter" to protect their air and water. On November 4, residents of Elizabeth Township will next be going to court to protect their public parks and water by opposing a township decision to open up their park to private fracking.

Municipalities are beginning to stand up and demand a more direct democracy, via courts and "home rule." Rather than top-down governance, residents are asking: why can't we make important decisions about our own communities directly? Indeed, this idea is exactly grassroots democracy, one of the pillars of the Green Party. We Greens should not only be supportive of Grant, Elizabeth, and other townships exerting their rights to self-determination, but also actively encourage municipalities throughout Allegheny County to do the same. Our 2020 Green legislative campaigns can help change the public debate by calling attention to these struggles and strongly emphasizing communities' right to decide their own affairs to protect their own environment and health.

The Community Environmental Legal Defense Fund (CELDF) and state affiliate PA Community Rights Network are organizations promoting this approach; they even have draft state constitutional amendments that would affirm municipal rights to protect their environment free of state "preemption" laws as well as recognize statewide ballot referenda. It's our values of democracy and decentralization at their finest; promoting these ideas also means promoting Green values.

I hope Green candidates in 2020 will consider these amendments as part of their legislative platforms; all Greens can investigate how to push their municipalities into claiming their own "home rule" rights to act when county and state leaders won't.

Garret Wasserman is vice-chair of the Green Party of Allegheny County and managing editor of their Green Point online newsletter.