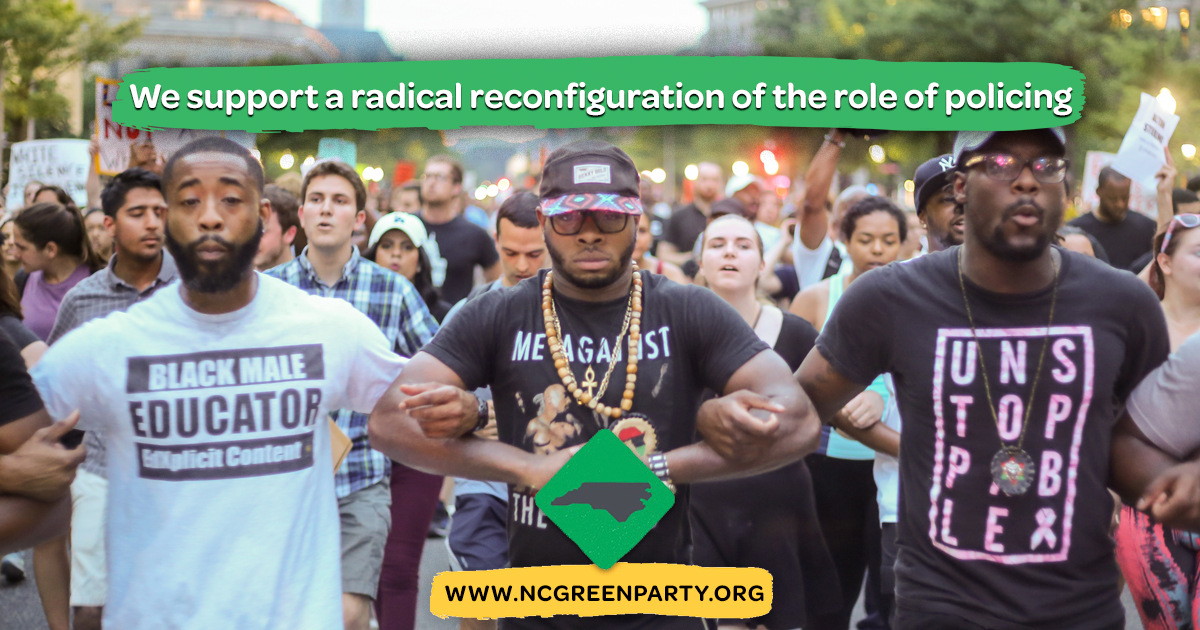 The NCGP has been busy supporting the push for racial and economic justice in North Carolina, standing alongside Black Lives Matter activists in Winston-Salem, Greensboro, Charlotte, Raleigh, and all over North Carolina. NCGP cochair Tony Ndege is a founding organizer of Black Lives Matter Winston-Salem and has co-organized several protests in his city, and many other Greens including recent candidates Joshua Bradley, Robert Corriher, and Keenen Altic have been involved in dozens of actions throughout the state. We support these protests and the burgeoning movement to end the US policing and carceral system, which is designed to suppress opposition to the economic supremacy and white supremacy of the capitalist class.

The system that murdered George Floyd is showing the world not only its contempt for the lives of people of color but also its inability to address the economic, ecological, and social problems that beset the US. As we call for justice and reparations for people of color that have suffered for generations under the heel of systemic racism, we also call for an end to the underlying economic system that has created the conditions for police violence and murders in the first place: capitalism. 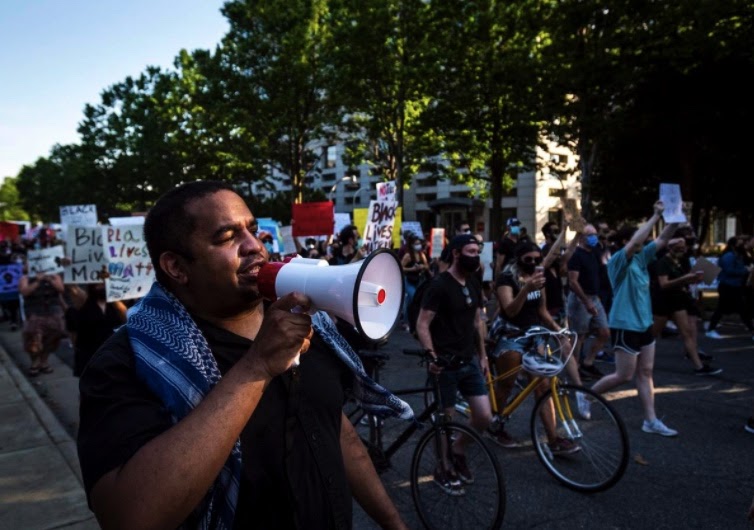 “To understand police violence, one has to acknowledge the historical role of capitalism and racist exploitation in dictating the priorities of policing,” said Wayne Turner of the North Carolina Green Party. “That priority, despite slogans and police mottoes, has always been the protection of private property and the suppression of working-class organizing and extending the brutal legacy of slavery and cheap labor under Jim Crow to generations of black and brown communities.”

“By shifting funding away from social programs that promote the health and well-being of the general public and address economic inequality and instead shifting toward more policing, the US has allowed militarized police forces to become the face that governments present to the public,” said North Carolina Green Party cochair Tommie James. “We shouldn’t send swat teams to deal with mental-health issues or use deadly force when responding to a supposed traffic violation.”

NCGP supports a radical reconfiguration of the role of policing in the US. A first step should be to end qualified immunity of police, which shields police officers and other government officials from legal actions by victims and families, even if their civil rights were violated. It is necessary that we redefine the role of police and sheriff’s departments, who are seen by much of the public as the protectors of wealth and property, as suppressors of dissent, and as actively funneling the poor and people of color into our bloated prison system that reduces individuals to a life of legalized slavery. 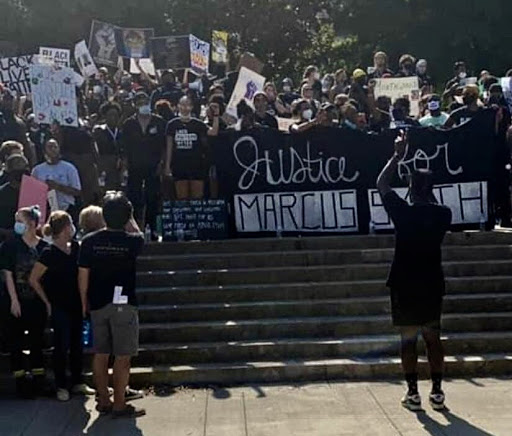 Marcus Smith was killed in Greensboro in 2018, illegally hogtied and left to die after he asked for help.
There are ongoing legal efforts to hold the police department accountable.

NCGP members participated with other activists for more than a week in a sidewalk occupation in front of the governor’s mansion to urge Governor Cooper to veto NC Senate Bill 168. The NC Senate and House passed the bill at 2:30 a.m. June 27, establishing that all death records are confidential and not available for public review without family authorization. The bill sat on Governor Cooper’s desk for days until the deadline of July 6, when he finally signed the veto. If the bill had become law, it would have made it more difficult to get justice for victims of police violence.

Environmental activists have won a hard-fought victory this month: Duke Energy Corporation and Dominion Energy announced July 5 they have abandoned the proposed $8 billion pipeline, citing continued regulatory delays and uncertainty. The pipeline would have carried natural gas 600 miles through West Virginia, Virginia, and North Carolina and underneath the Appalachian Trail. The NCGP has spoken out about this issue since 2015, and we have consistently called for the socialization of all utilities, including energy.

Despite the utility companies’ claims, the NCGP has noted that the natural gas was largely meant for overseas sales and not for consumption in North Carolina. Meaning, the operation to transport fracked natural gas to the coast served mainly to increase profits for Duke and Dominion shareholders and not for the public good. The real win will come when we replace privatized energy utilities with public ownership and operation. 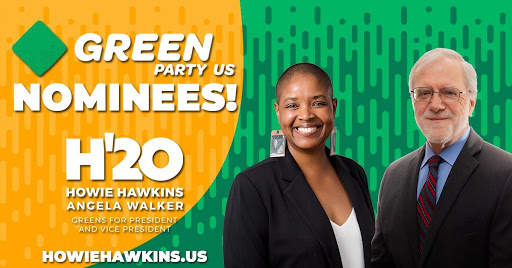 For the first time ever, a Green presidential ticket will appear on the North Carolina ballot! We are thrilled to report that on July 11, retired Teamster and lifelong Green activist Howie Hawkins was nominated by the Green Party of the United States as its 2020 candidate for president. Hawkins was nominated after receiving a majority of votes in the first round of voting at the party’s national convention, where he received 210 out of 355 total votes (59.15%) cast by Green delegates from across the US. A call to approve Angela Walker, a truck driver from South Carolina, as the vice-presidential nominee was approved by a majority vote of 221. In their acceptance speeches, the nominees highlighted the connection between climate change and social justice and the importance of enacting a real Green New Deal.

The Green Party refuses all corporate contributions, so dues-paying members play a vital role ensuring our state and local organizations have the resources needed to build an independent party for people and planet free from the influence of the 1 percent.

Who can Become a Member of the North Carolina Green Party? North Carolina residents who are registered to vote as “Green” are eligible to become members of the NCGP after they have affirmed Green Party principles (see our 10 Key Values and platform), set their own dues rate using a budget-friendly sliding scale, and initiated payment of those dues. You choose your own dues level on the honor system, based on what you can pay. Note: Residents who are ineligible to vote due to state disenfranchisement (including but not limited to reasons such as age, criminal record, or noncitizen/undocumented status) may also become members. Email the NCGP secretary at [email protected] if you feel you are ineligible to vote due to state disenfranchisement. All NCGP members, with the exception of noncitizens, shall pay modest annual dues.

Find out more at www.ncgreenparty.org/membership.

In solidarity with people and planet against profits,
The North Carolina Green Party