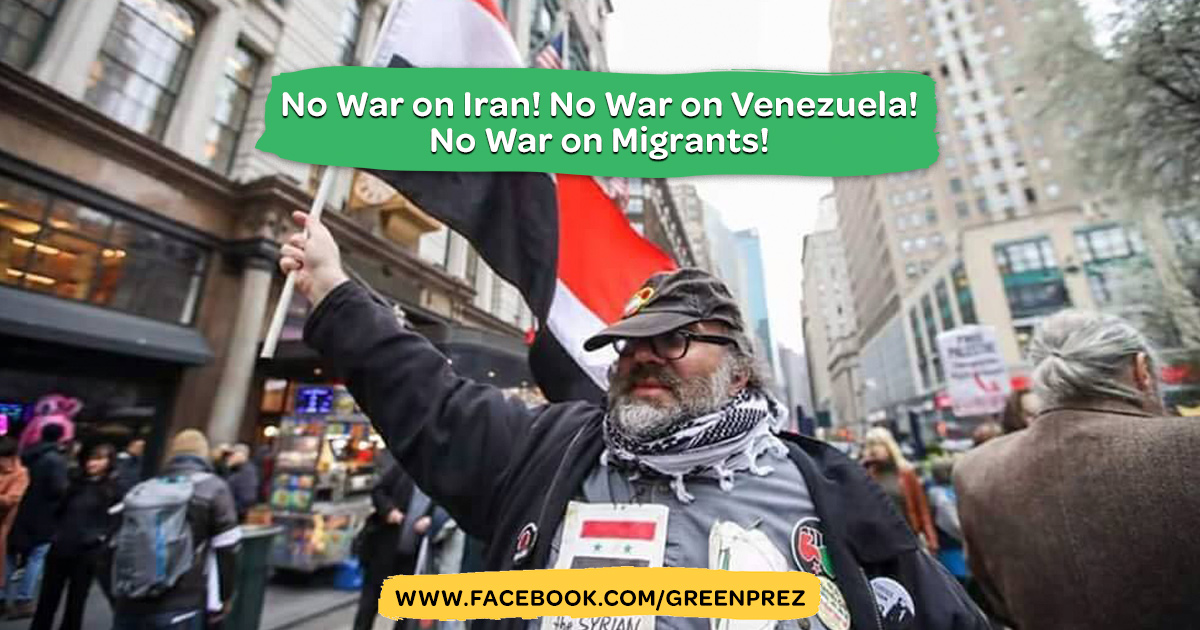 My name is David Rolde. I’m the Secretary of the Greater Boston Chapter of the Green-Rainbow Party. I’m also part of planning Rage Against the War Machine, which will be a large demonstration in DC on Oct 11 and a revolutionary anti-imperialist summit or conference on Oct 12. And I’m running in the 2020 Green Party U.S. presidential primaries as a protest candidate against the phony U.S. Presidential election. My platform is: Totally eliminate the U.S. military and weapons industry. Shut down the USA and its empire here and everywhere. Decolonization. Reparations. Self-determination for Africans, Indigenous People and all oppressed peoples. And From the River to the Sea, Palestine Will Be Free - Stop all funding to the Zionist Entity. Boycott Israel

I’m a longtime member of the American Iranian Friendship Committee. And I am going to talk a little bit about the war on Iran.

The U.S. regime and its allies, including the Zionist regime, have been at war against Iran for a long time, with economic sanctions starving the people of Iran. With constant threats of bombing and invasion and nuclear attack and annihilation against Iran. And by supporting the MEK Mojahedin-e Khalq and other terrorist groups attacking Iran. The U.S. regime sponsors terrorism and assassinations inside Iran. The U.S. regime perpetrates terrorism in Iran and Syria and Iraq, etc., while hypocritically and falsely accusing Iran of sponsoring terrorism.

Donald Trump’s recent threats against Iran are horrendous and scary. We need to stop the escalation of the war on Iran. But Trump isn’t the problem, or he is only part of the problem. It is a bipartisan U.S. war against Iran. Barack Obama started talking about nuking Iran back in 2004. I and thousands of anti-war activists protested the 2004 Democrat Party National Convention or DNC here in Boston. Obama was the keynote speaker. Later in 2004 Obama gave a speech in which he said that quote “we need to have all military options reserved” for Iran. So Obama was saying that the U.S. regime should consider attacking Iran with nuclear weapons, back in 2004. When Hillary Clinton was running for president in 2008 she said that if she were president she could quote “totally obliterate Iran”. This is the same rhetoric that Trump is using now. In 2009 Mahmoud Ahmadinejad, the popular progressive anti-imperialist president of Iran, was re-elected by the Iranian people. The U.S. regime falsely accused Ahmadinejad of election fraud and political repression. And the U.S. regime covertly supported the so-called Green Movement trying to overthrow the government in Iran. Obama was the U.S. president then.

Obama was NEVER sincere about wanting peace with Iran. Obama’s 2015 JCPOA or Iran Nuclear Deal was a bad deal for Iran. First it was unnecessary to have a deal to prevent Iran from developing nuclear weapons because Iran did not and does not have a nuclear weapons program. U.S. spy agencies knew and reported that Iran did not have a nuclear weapons program. And Sayyid Ali Khamenei, the religious leader of the Iranian government, declared that nuclear weapons are forbidden by God. I am not a proponent of religious government. But one advantage of a constitutional theocracy is that when the religious leader says that something is forbidden by God then you know that the Iranian government will not develop nuclear weapons. The Iran Nuclear Deal hypocritically allowed the U.S. and Zionist regimes to keep thousands of nuclear weapons with which to threaten Iran. The deal allowed international inspections even of Iran’s conventional military and scientific sites, thus giving the U.S. regime information that can be used during a U.S. military strike on Iran or invasion of Iran. But the worst thing about the Iran Nuclear Deal was the quote “snap back” provision which allowed the U.S. regime to back out of the deal at any time on a flimsy pretext of suspecting Iran of violating provisions of the deal . No evidence would be required for the snapback, only a stated accusation. The reason that the Iranian government agreed to the nuclear deal is because they were pressured into it. The Iranian people were and still are suffering greatly under U.S.-imposed economic sanctions. The nuclear deal seemed to be the only hope to get the U.S. to lift the sanctions. Plus the U.S. was threatening Iran militarily, and the U.S. was interfering in Iranian politics and elections so that the reformist president Rouhani was elected to agree to the deal.

If Obama were still U.S. president or if Hillary Clinton were U.S. president, they would have withdrawn from the Iran Nuclear Deal and blockaded Iran’s oil exports and threatened missile strikes on Iran just like Trump did.

Similarly the U.S. regime has been at war against Venezuela, and the rest of Latin America, long before Trump became U.S. president. The George W Bush regime organized an attempted coup against Hugo Chavez in 2002. Obama and other U.S. Democrat Party politicians, including even Bernie Sanders, have made hostile comments and issued lies and threats against Venezuela. Hillary Clinton herself was deeply involved in the coup against Honduran president Manuel Zelaya in 2009 while Obama was president. The U.S. regime overthrew Zelaya, and still supports a repressive rightwing neocolonial puppet government in Honduras, because President Zelaya led Honduras to join ALBA, the progressive anti-imperialist Alliance of Bolivarian states including Venezuela, Cuba, Bolivia, Nicaragua and at the time Ecuador. The war against Venezuela and the ALBA states is connected with the war against Palestine and Iran and Syria. Iran and Syria are both official observer members of ALBA. In May 2009 the Zionist regime’s deputy foreign minister Danny Ayalon traveled to the Organization of American States OAS meeting in Honduras for his stated purpose to quote “challenge the penetration of Hizbollah and Iran” into Latin America. So it wasn’t only Negroponte who was trying to tell the Honduran government what to do. The Zionist regime’s Danny Ayalon was trying to tell them what to do too. Ayalon’s visit was just a month before the imperialist coup against Zelaya. Anti-imperialist Colombian activists have told me that there are rightwing Colombian paramilitary troops that have been sent to join the imperialist Al-Qaeda military invasion of Syria. In May of this year Telesur reported that Honduran U.S.-puppet president Juan Orlando Hernández had met with Netanyahu and Pompeo in Brazil (at Bolsanaro’s inauguration) to plan for a thousand “Israeli” troops to be sent to Honduras to train Honduran soldiers and police in brutal repression methods. All these imperialist wars and occupations are interconnected.

Getting rid of Trump and replacing him with a Democrat president is not going to bring lasting peace or stop the U.S. and Zionist war on Iran or Venezuela or anywhere else, or the war against migrants. We need to shut down the USA and shut down the Zionist regime in order to have peace. The so-called USA is an illegitimate white nationalist colony on stolen land. The USA was founded and built on genocide and slavery and war. The so-called USA expanded all the way across this continent, invading and occupying and destroying many indigenous nations. The USA even expanded across the Pacific Ocean to conquer Hawaii. In the 19th century the USA stole half of the land of Mexico. Mexicans and Hondurans and other indigenous people of these American continents have every right to live and work anywhere on these continents, and certainly more right to be here in Boston than I have as a European colonist here. The Zionist Entity of so-called “Israel” is exactly like the USA. So-called Israel and the USA are ideological soulmates. The Zionist Entity is a white nationalist colony on stolen land in Palestine. The Zionist colony is funded by the USA and is genocidally expanding destroying indigenous nations and societies in the Middle East.

In order for Iran and other peoples and nations around the world to be safe from imperialist wars of aggression and occupations, we need to stop all funding to so-called Israel. We need to totally eliminate the U.S. military and weapons industry. And we need a revolution so oppressed peoples everywhere, including colonized Africans and indigenous people right here, can have self-determination, reparations and power so they can be free from domination by parasitic white nationalist capitalism.

I guess that’s is all I want to say for now.

STOP THE WAR ON MIGRANTS

STOP THE WAR ON AFRICANS

STOP THE WAR ON IRAN

STOP THE WAR ON VENEZUELA

OVERTHROW CAPITALISM AND STOP ALL THE WARS