The Green Party is not the Democrats’ problem 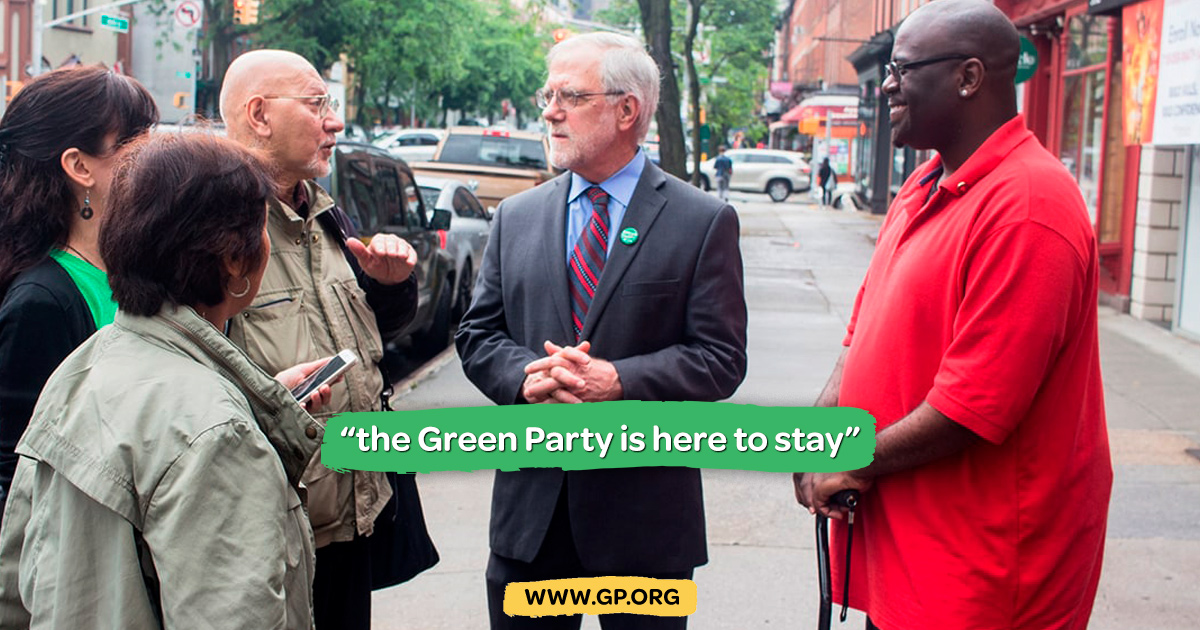 Although it is a constant refrain from Democratic leaders and commentators, the Green Party is not why the Democrats lost to Bush and Trump.

In trying to excuse her loss to Trump, Hillary Clinton recently made the baseless smears that Jill Stein, the Greens’ 2016 presidential candidate, is a “Russian asset,” and that Russians and Republicans are “grooming” a third party challenger for 2020.

Cornell professor Glen C. Altschuler opined in The Hill last week that since the Green Party was the “spoiler” of the 2000 and 2016 presidential elections, “The ‘Green’ New Deal that Tom Perez needs to make” is to persuade the Green ticket endorse the Democratic ticket in the swing states in 2020.

Altschuler is not facing reality. The Green Party is not going back to the “safe states strategy” that a faction of it attempted in 2004. It couldn’t even be carried out. It alienated Greens in swing states who were working so hard to overcome onerous petitioning requirements to get the party on the ballot. Keeping the party on the ballot for the next election cycle for their local candidates depended on the Green presidential vote in many states. It became clear that safe states was dispiriting and demoralizing because the party didn’t take itself seriously enough to justify its existence independent of the Democrats. Few people, even in the safe states, wanted to waste their vote for a Green ticket that was more concerned with electing the Democratic ticket than advancing its own demands, which in 2004 started with ending the war in Iraq that both Bush and Kerry wanted to escalate with a “surge” of more troops.

The assertion that the Green Party spoiled the 2000 and 2016 elections is a shallow explanation for the Democrats’ losses.

It wasn’t Ralph Nader who elected Bush in 2000. It was the Supreme Court. It stopped the Florida recount. A consortium of major news organizations later did a thorough recount. Gore won their statewide recounts.

It wasn’t Jill Stein who elected Trump in 2016. It was many factors, including black voter suppression, Comey publicly reopening of the Clinton email case a week before the election, $6 billion of free publicity for Trump from the commercial media, and a Clinton campaign that failed to get enough of its Democratic base out.

In both cases, it was the Electoral College that gave the presidency to the loser of the popular vote.

To hold all other factors constant and focus on the Green Party as the deciding factor is a hypothetical that is a logical fallacy because it assumes away a factual reality: the Green Party is here to stay.

The Green Party exists because it is needed. Most Greens are furious former Democrats angry at a party that joins with Republicans to support pay-go domestic austerity and a bloated military budget and endless wars. Trump may call climate change a hoax. But the Democrats act as if it is a hoax.

A Green New Deal from Tom Perez? Is Altschuler serious? It was Perez who got the Democratic National Committee to recommit to donations from the fossil fuel industry and to Obama’s “all-of-the-above” energy policy, which is a euphemism for fracking the hell out of the country for oil and gas. Obama continues to boast that his policy made the US the world’s largest oil and gas producer.

The Green Party’ signature issue for the last decade, the Green New Deal, would put the country on a World War II scale emergency footing to transform the economy to zero greenhouse gas emissions and 100% clean energy by 2030. No Democrat is campaigning for that program on that science-based timeline for averting mass climate carnage.

Inequality that has been growing for 45 years under both Democratic and Republican administrations. Inequality kills. The life expectancy gap between America’s richest and poorest counties is now over 20 years. The exasperated former Democrats in the Green Party want to eliminate poverty and radically reduce inequality by finally enacting the Economic Bill of Rights that FDR proposed in his last two State of the Union addresses in 1944 and 1945. Those rights should include a job guarantee, a guaranteed income above poverty, affordable housing, improved Medicare for all, lifelong public education from pre-K through college, and a secure retirement.

A new nuclear arms race has taken off while arms control treaties have been abandoned. None of the major party candidates “have a plan for that.” How about a no-first-use pledge, unilateral disarmament to a minimum credible deterrent, and, on the basis of those tension-reducing initiatives, aggressively pursuing negotiations among the nuclear powers for complete nuclear disarmament? The US is obligated to negotiate nuclear disarmament under the 1970 Nuclear Non-Proliferation Treaty. The Treaty for the Prohibition of Nuclear Weapons, the text of which was approved by 122 non-nuclear nations in July 2017, demands it. The International Campaign to Abolish Nuclear Weapons received the Nobel Peace Prize for that achievement. Almost no one in America even knows that. The world is worried. Americans are kept ignorant. The major party candidates aren’t talking about it.

Greens want to get Trump out as much as anybody. Our advice to Democrats is to stop worrying about the Green Party and focus on getting your own base out. Our position is that we are running our own candidates because neither corporate-indentured party will support real solutions to the life-or-death issues of climate change, growing inequality, and nuclear weapons.

The last two Republican presidents lost the popular vote when they were first elected. Instead of telling the Green Party to go away, or back the Democratic ticket, Democrats should join Greens in fighting to abolish the Electoral College and elect the president through a National Popular Vote using Ranked Choice Voting. That would end the vote-splitting spoiler problem.

The Greens must be in the presidential race to raise these demands. The Greens put solutions into public debate that the major parties refuse to support. That has been the historic role of third parties in the US since the Liberty Party put abolition on the political agenda. The Greenback Labor, People’s, and Socialist parties first advanced social and economic reforms that later came to be adopted. That is a role Greens will continue to play.

But Greens have more ambitious goals. We want to build a major party that can defeat the two-capitalist-party system of corporate rule. We want to ally with other progressive and socialist parties for a united electoral front of the independent left. Our strategy is to build the party from the bottom up by electing thousands to municipal and county offices, state legislatures, and soon the House as we go into the 2020s. When the independent left has a caucus in Congress, then its presidential ticket will be competitive.

Greens don’t spoil elections. We improve them. We advance solutions that otherwise won’t get raised. We are running out of time on the climate crisis, inequality, and nuclear weapons. Greens will be damned if we wait for the Democrats. Real solutions can’t wait.