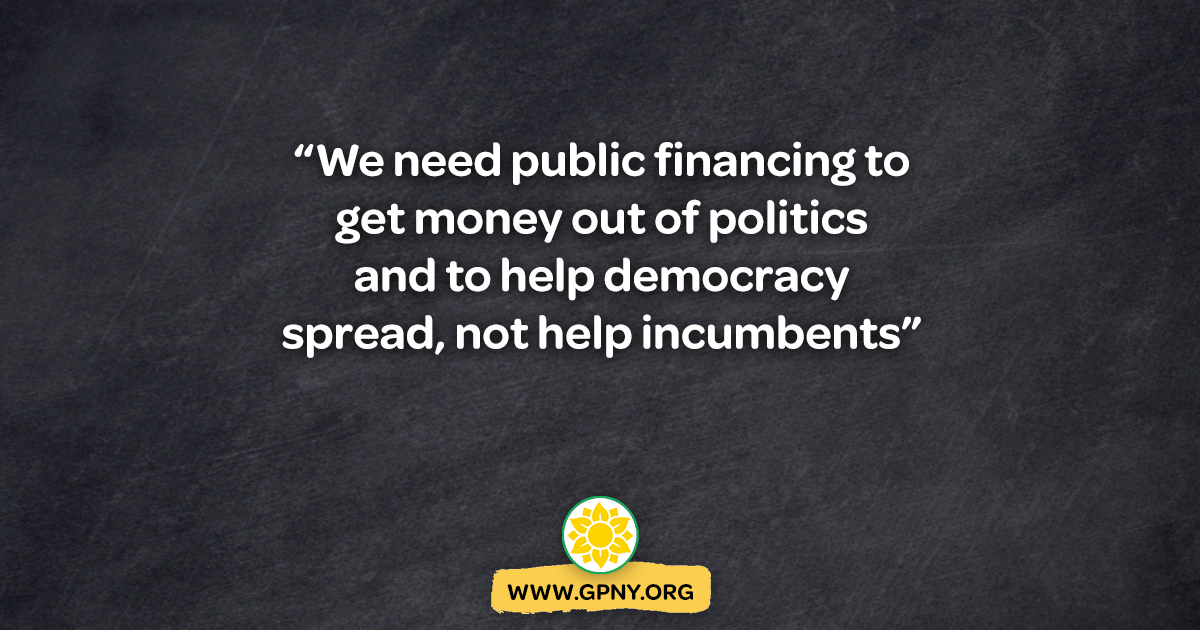 ALBANY, NY — It's not easy being Green.

The Green Party of New York is feeling blue but vowing to fight on after failing to get enough votes in the presidential election to remain on the ballot in the Empire State.

An election law overhaul related to New York's soon-to-be-implemented public matching funds program significantly increased the threshold needed for parties to retain their line on the state ballot ― a blow to a liberal third parties.

According to the new rules, a party must garner either 130,000 votes or 2% of the total votes cast, whichever is higher, to maintain its status.

Howie Hawkins, a Syracuse native and the national Green Party candidate for president, received only 0.3% of votes in New York last week, according to the Associated Press.

"We always knew this would be a tough year," Peter LaVenia, the state party's co-chair told the Daily News. "I'm sanguine about it and I unfortunately always suspected that litigation is where we were going to end up."

The Green Party and the Libertarian Party of New York filed a federal lawsuit in June in the Southern District of New York seeking to invalidate the new threshold.

The fate of both parties and that of the Independence Party, which also ran its own presidential contender, remains uncertain.

Jo Jorgensen, who ran on the Libertarian line, and Brock Pierce, the Independence Party candidate, both failed to breach 1% of the total vote count. The future of the New York-based Serve America Movement Party, which gained ballot access in 2018 running former Syracuse Mayor Stephanie Miner for governor, is also unknown as it is not a national party and didn't back a presidential candidate.

The Working Families Party, which critics contend was Gov. Cuomo's true target with the new thresholds, as well as the Conservative Party were able to garner enough votes to retain their ballot lines by endorsing and running major party candidates on their lines.

"The way we set the thresholds, we always expected the Working Families Party to survive," the governor said during a radio interview with WAMC. "It was set deliberately so. We expected the Conservative Party to survive. But you're going to a public financing system: should taxpayers be expected to fund all these races? In all these little, marginal parties?

"If you want taxpayer money, you have to be a credible party," he added.

The state campaign finance system, with public matching money for candidates who choose to participate and lower individual contribution limits, was passed as part of the budget this year after initially being struck down in court. It is slated to take effect in 2022.

Matching funds or not, a ballot line is crucial for parties fundraising efforts and for maintaining bookkeeping accounts.

The Green Party first achieved ballot status in New York in 1988 when Al Lewis received over 50,000 votes, the old threshold, as the party's gubernatorial candidate.

In recent years, the popularity of the party has fluctuated greatly. In 2018, Hawkins ran for governor and earned 103,946 votes, just below 2% of the total. Four years earlier, he garnered 184,419 votes, nearly 5% of all ballots cast that year.

"It seems pretty anti-democratic to come up with this number just specifically to allow two (minor) parties to remain on the ballot," LaVenia said. "I think his whole argument about public financing is backwards anyway. We need public financing to get money out of politics and to help democracy spread, not help incumbents, which is the way it's set up, and to keep people out of it."

The lawsuit filed by the Greens and Libertarians is ongoing, as is another suit brought by the SAM Party, even though a federal judge denied a request for a preliminary injunction to suspend the law before this year's election.

U.S. District Judge John Koeltl denied a preliminary injunction in the SAM suit in September, writing in his decision that the new thresholds are well within the election law requirements "upheld in other cases and further the reasonable goals of avoiding overcrowded ballots and voter confusion and ensuring that candidates who appear on the ballot enjoy a 'modicum of support.' "