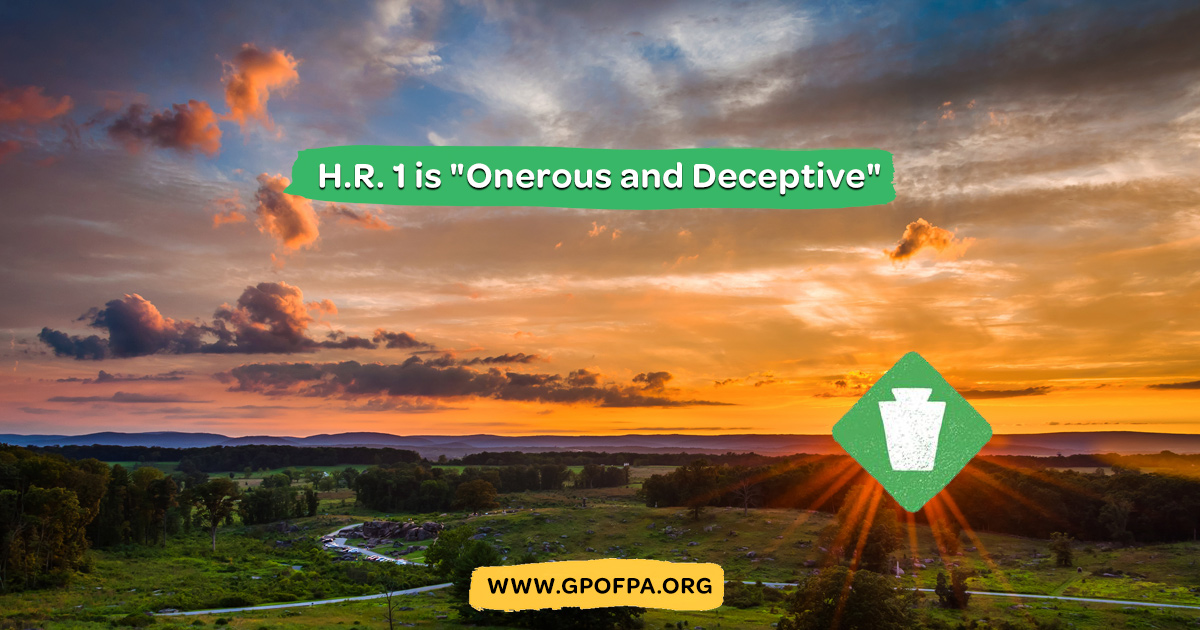 "The Green Party of Pennsylvania (GPPA) opposes any provisions in U.S. House Resolution 1 (H.R.1) that would work to vilify or weaken progressive voices, and we are against the proposed changes for the federal matching funds program," stated Jocolyn Bowser-Bostick, chair of the Delaware County Green Party and member of the GPPA Steering Committee.

Also referred to as the "For the People Act of 2019," H.R. 1 was introduced by Representative John Sarbanes (D-MD) and Speaker of the House Nancy Pelosi (D-CA). The stated purposes of this bill are to expand Americans' access to the ballot box, reduce the influence of big money in politics, and strengthen ethics rules for public servants. H.R. 1 currently has 225 representatives listed as co-sponsors.

Sheri Miller, co-chair of GPPA from Adams County, said, "H.R.1 is a deceptive bill! A quietly tucked-away provision of H.R.1 will make it nearly impossible for anyone outside of the two-party system to run for president. Making it easier for people to vote will NOT improve democracy if the only choices on the ballot are the rich or the chosen!"

H.R. 1 hinders the ability of average citizens, without high public profiles or access to large sums of money, to obtain government backed matching funds for their political campaigns at the federal level. Emily Cook, a member of Montgomery County Green Party, explained, "Included in H.R. 1 is a seriously onerous provision amending the current eligibility requirements for federal matching funds for presidential campaigns as it pertains to minor or 'third' parties. If passed, it would raise the minimum $5,000 per state to an outrageous $25,000! A 500% increase in order for a campaign to receive matching funds."

"If Congress passes H.R. 1 in its present form," declared Cook, "it would effectively exclude minor political parties and independents from the presidential election landscape by making federal matching funds out of reach. For example, presently 20 people in a given state, each giving the maximum $250.00, would get the candidate to the present $5,000.00 threshold. With the proposed H.R. 1, however, it would require 125 people in a given state with a new lower maximum of $200.00 per donor to reach the new whopping $25,000 threshold and this would be for a total of at least 20 states. These matching funds are a lifeline to minor or 'third' parties, giving them an opportunity to be actively part of the political process."

Chris Robinson, a GPPA delegate from the Green Party of Philadelphia, said, "There are other provisions in H.R.1 which seek to demonize leftist or progressive political organizations that harshly criticize the major political parties. H.R. 1 sees progressive candidates and policies as threats to the electoral process and national security, and it would require 'intelligence' agencies, such as the FBI and Homeland Security, to place progressive political groups under surveillance and to produce annual reports on them."

Alan Smith, co-chair of GPPA from Chester County, explained, "People want fairness. People want a say. Grassroots democracy and social and economic justice are two of the Four Pillars of the Green Party. These are crippled by the matching-funds and surveillance pieces of H.R. 1. They automatically make candidates of the two corporate, war-mongering parties the front runners in any election. The matching-funds and the surveillance pieces undermine the whole bill making it harder for candidates without the approval of the ruling class to get on the ballot."

"What good does it do to open up voter participation if your participation must be sanctioned by Wall Street and the war machine?" continued Smith. "Civic engagement must go beyond simply rubber stamping pre-approved candidates. True democracy and economic justice should allow the teacher, the custodian, and the unemployed not just a say AT THE BALLOT, but also a say in who gets ON THAT BALLOT. As currently written H.R. 1 will further disenfranchise voters and silence voices outside of the corporate mainstream. This bill I fear is a trap. Elections should be fair and free, not full of snares and fees."

As Bruce Dixon has colorfully described it, "H.R. 1 is a brightly painted ice cream truck, playing loud music about voting rights, protecting the vote, ballots by mail, and getting the money out of political campaigns, and reforming the ethics of elected officials and their top appointees. But none of that stuff will pass while Republicans run the Senate, while Trump is in the White House, and while Democrats are on the corporate tit themselves."

"If Democrats take the White House in 2020, you won't see that ice cream truck or hear these promises anymore," continued Dixon, who is on the steering committee of the Green Party of Georgia and the managing editor at Black Agenda Report. "The only things H.R. 1 can deliver are manufactured fear of the manufactured threats posed by Americans in America working for change, working to save themselves and the planet from capitalist robbery, genocide and ecocide, along with more voter suppression through the elimination of voter choices outside the two capitalist parties."

The Green Party urges elected representatives in the House to eliminate this change to matching funds from H.R.1, as well as the other provisions that create fear of the left and seek to intimidate into silence the progressive voices that oppose the status quo. GPPA is also asking voters to sign the online Petition to Stop H.R. 1.