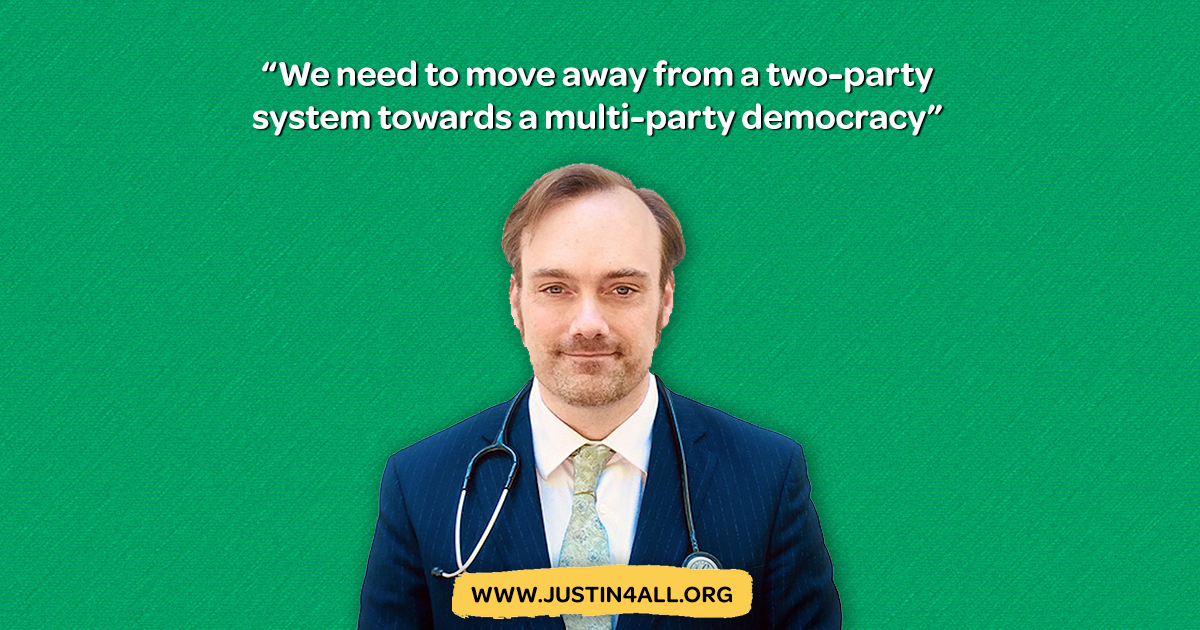 Justin Paglino, the Green Party of Connecticut candidate who challenged incumbent Democrat Congresswoman Rosa Delauro last fall, is running for the Guilford Board of Selectmen. Paglino is running against four Board of Selectmen incumbents, Democrats Louis Federici and Sandra Ruoff and Republicans Susan Renner and Charles Havrda. CT Examiner spoke with Paglino about his run, and policy priorities if elected.

This interview has been edited for clarity.

How did you decide to run for local office in Guilford?

My focus in politics often gets drawn to national affairs, but this year, Guilford has been particularly interesting because of our Board of Education race. That has really grabbed a lot of people’s attention, not just mine. It’s becoming a national story. To me, it was a reminder of the importance of local politics and the importance of being engaged and involved, and I realized that I had the opportunity to run.

Did you consider running for the Board of Education?

I did consider running for the Board of Education because of the Truth in Education controversy. I wanted to possibly be one of the candidates stepping in as an alternative to the Row B, anti-Critical Race Theory candidates, but the Independent candidates on Row C were independently contacted and recruited. I am completely supportive of the Row A and Row C candidates for Board of Education, Paul Freeman, and diversity, equity and inclusion in our schools. I’m not convinced at all that there is any kind of threat to our children’s well-being from diversity, equity and inclusion teaching in our school. I do think there is a threat to our public schools from the Row B candidates who are, to my mind, misguided and misleading and threatening to undermine the progress the school system has made.

What led you to run for the Board of Selectmen?

I still had interest in running for something, and I thought it might be a good option to throw my hat in the ring for the Board of Selectmen. I’ve been living in Guilford for a long time, and I have a lot of love for the town and interest in seeing it run well. I expect to continue living here for a while. I have children in the public school system, a son in tenth grade, a daughter in seventh, and on top of that, I think I could contribute something to the management of the town if I were elected.

What issues would be your priority?

My particular interest is in clean energy. The global effort to transition our energy use from fossil fuels that are contributing to climate change to renewable, clean energy is so important, but any difference we can make on a local level is important as well. I would like to see more solar panels in town and more car chargers in town, not just at government buildings but maybe at shopping and grocery store parking lots. That’s one issue I feel I could push more to the fore if I were on the Board of Selectmen.

To what extent is this run about elevating the Green Party in Guilford?

I’ve seen examples of Greens having success in many towns where they run local candidates, like Clinton, Windham, and New London. Those towns all have had elected Greens and have been able to grow as a local party, building themselves on the activity that happens when you run candidates and have campaigns to run. That’s how you engage voters. I’m a strong believer in the usefulness and importance of an independent, left party, which to me is the Green Party. I believe we need to move away from a two-party system towards a multi-party democracy, so voters can vote for their favorite candidate on the ballot instead of only having two options.

What is the pitch you give to Democratic voters that they should consider voting for you over the Democratic candidates for Board of Selectmen?

I would hesitate to make a case for myself over the Democrats, I might be a little more inclined to make a case for myself over the Republicans. I know Lou Federici and Sandra Ruoff, and I think they do a good job. What I think I bring that’s a little different from the current members on the board is a greater sense of urgency about transitioning to clean energy. I’ve lived in town for 18 years, and I haven’t seen a lot of changes in energy infrastructure. I’d like to explore starting a municipal utility, because other towns in the state have their own energy utilities that generate their own electricity, and when you have that local control and power, you have much more control over the type of energy you choose to use.

In the Board of Selectmen race, you can only vote for two, and there are two Democrats, two Republicans, and myself. So if they are supporting the Democrats and like the Democrats, I understand that, and I would just ask them to consider me as an alternative who comes from a bit of a different perspective. I hope I might appeal to independent or unaffiliated voters who don’t always vote the party line and are open to different individuals. There are a lot of independent voters in the town who don’t always vote the party line, and I hope they consider me as an option.