One Green's perspective on the state of the union 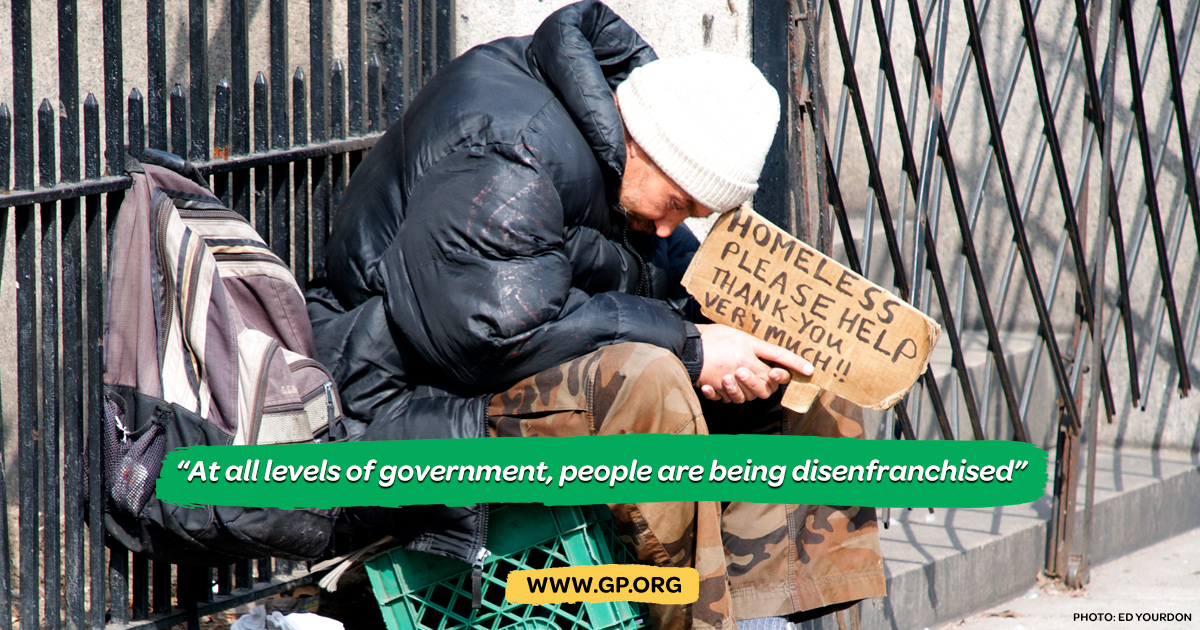 Good evening, fellow Americans. My name is Justin Beth and I am a member of the Green Party of the United States. I would ask you to consider a Green Party perspective on the State of the Union.

Before I share my thoughts on the state of the union, I'd like to give you some background on the Green Party, for those of you that are not familiar with our message. The Green Party of the United States was founded with the purpose to elevate People, Planet, and Peace over corporate profit and greed. As a result, we refuse contributions from corporations, which ensures that we are truly a party for the people.

Our platform and the policies we pursue, when elected, are founded on our four pillars of Grassroots Democracy, Social Justice, Ecological Wisdom, and Non-Violence. Being a party dedicated to these principles, results in the Green Party being the only national party that is openly in favor of things like Single Payer Healthcare, ending all wars, getting rid of the For-Profit Prison System, and a Green New Deal (which was originally our idea back in 2010 ... long before Bernie Sanders and Alexandria Ocasio Cortez started talking about it). Not only are all these things possible to achieve, these are exactly the kind of things that the majority of Americans are crying out for.

This brings us back to the point of this response. What is the state of the union. Sadly, we refer to this as the State of THE Union and not the State of OUR Union. It's no longer about US. Unfortunately, we the people are not getting the representation we deserve from our elected officials. With few exceptions, it's clear that our representatives are no longer working on our behalf.

How can we say that the State of the Union is anything but abysmal? America is the only country in the world where over the last 20 years the standard of living has been decreasing for those in the bottom 50% of wage earners. The reasons for the movement that drove us out into the streets to protest in 2009 ... fighting for the 99% ... is still with us today. Today we see more hunger, more poverty, more homelessness, and more on the verge of entering poverty. The divide is growing larger and more people are now on the bottom, with 80% of Americans today living paycheck to paycheck. This is working people we are talking about ... some working 2 to 3 jobs. How is this the American Dream? In fact, it's a nightmare for most Americans, living with an uncertain future.

So ... what exactly are we getting out of our elected officials? Let's look no further than the fight over the wall on the southern border, for the moment. Our "representatives" have chosen this line in the sand to be a battle line between Republicans and Democrats. While homeless veterans are dying in the streets of America and a majority of Americans are living paycheck to paycheck, this is what our representatives are focused on? That simply makes no sense. If anything, this attempts to fix a symptom, but does nothing to help the underlying cause of this manufactured crisis. Wouldn't it be better if our elected "representatives" would stop fomenting coups and implementing sanctions on countries in Central and South America, which leads to conditions that cause the people of those countries to flee? Look no further than the attempt to cause regime change in Venezuela, which both of our ruling parties are behind. How sad that Democrats and Republicans can unite over a decision to influence the government of the sovereign nation of Venezuela, while they cannot unite behind a bill that would enact Single Payer Healthcare for all Americans. We deserve better from elected officials, regardless of the party they belong to.

Let's look at another serious crisis that is being addressed inadequately by both Democrats and Republicans: Widening wage inequality and a deteriorating standard of living for many Americans. The Republican Party's solution of trickle-down economics and tax cuts has only exacerbated the widening gap between the haves and have-nots. On the other hand, the Democratic Party suggests higher taxes must be put into place to pay for programs that would benefit society. While the Democratic Party is on the right track, that assumes the government actually spends our tax dollars wisely ... something there is no evidence of. The truth is, neither of the parties we've allowed to stay in power address the root cause of this issue, which lies in the separation of workers from the control of the goods they produce and the separation of Americans from the monetary system. To address these underlying causes of inequity, we can start by breaking up the big banks to that are too big to exist and instead pursue the creation of Public Banks that work directly for the people (as has been a big success in North Dakota). In addition, we should provide incentives for smaller businesses were workers control the direction of the company. These businesses would still compete in the open market, but the difference is that rank and file workers in these businesses will own the fruits of their labor. The point is, the usual tug-of-war between Republicans and Democrats over taxes as a solution to the wealth inequity in America does not go far enough to solve this problem.

With the 116th Congress coming into session, we should look at the priorities for both chambers. In both cases, we again see that our representatives in Washington DC, fail to act on behalf of the people.

In the House, the first order of business for the Democratic leadership (under Speaker Pelosi) was to essentially deny the formation of a committee, proposed by Alexandria Ocasio Cortez, to lay the ground work for a Green New Deal. The next order of business for the Democratic leadership was to completely set back the long running bill to enact Single Payer Healthcare (formerly known as HR 676). In both cases, we see the Democratic Party leadership in the House have failed to listen to the will of the people, with the majority of Americans being in favor of these ideas.

To give the appearance of working for the people of America, the Democratic Party has recently brought forward HR 1 or the "For the People Act of 2019". However, this attempt at appearing to be for the people is yet another effort to consolidate power and prevent other parties from participating in our democracy. Specifically, section 5202 of this bill actually increases the amount of money a presidential candidate needs to raise to qualify for federal matching funds, by a factor of 5 ... from $5,000 in 20 states to $25,000 in 20 states. For parties that are well connected to big donors, this new threshold is not too difficult to achieve. On the other hand, for a party that refuses big money donations with corporate ties, like the Green Party, this will likely prevent the Green Party from receiving these matching funds. So much for democracy and so much for getting big money out of politics.

The Senate, led by the Senate Majority Leader Mitch McConnell, is working against the will of people in its own way. Just today, the Senate passed a bill that not only condemns the pullout of troops from Syria and Afghanistan, but also is an attack on our first amendment rights to protest ... by allowing states to penalize entities that take part in Boycott, Divestment, and/or Sanctions related to Israel. This bill originally failed on multiple votes and yet the Senate leadership kept bringing it back until they could pass it. With this kind of staunch opposition to our first amendment rights, how could anyone think that the Senate is working for the will of the people?

At all levels of government, we see that the American people are being disenfranchised. The Green Party offers a clear and distinct alternative to the parties that have not only not been helping the people of America, but in many cases have been working against the will of the people. In the face of these facts, it is time we stand together and vote for real change that Americans need. Please ...  join us in this movement to fight for the government we the people deserve. Thank you and best wishes for a Greener future.