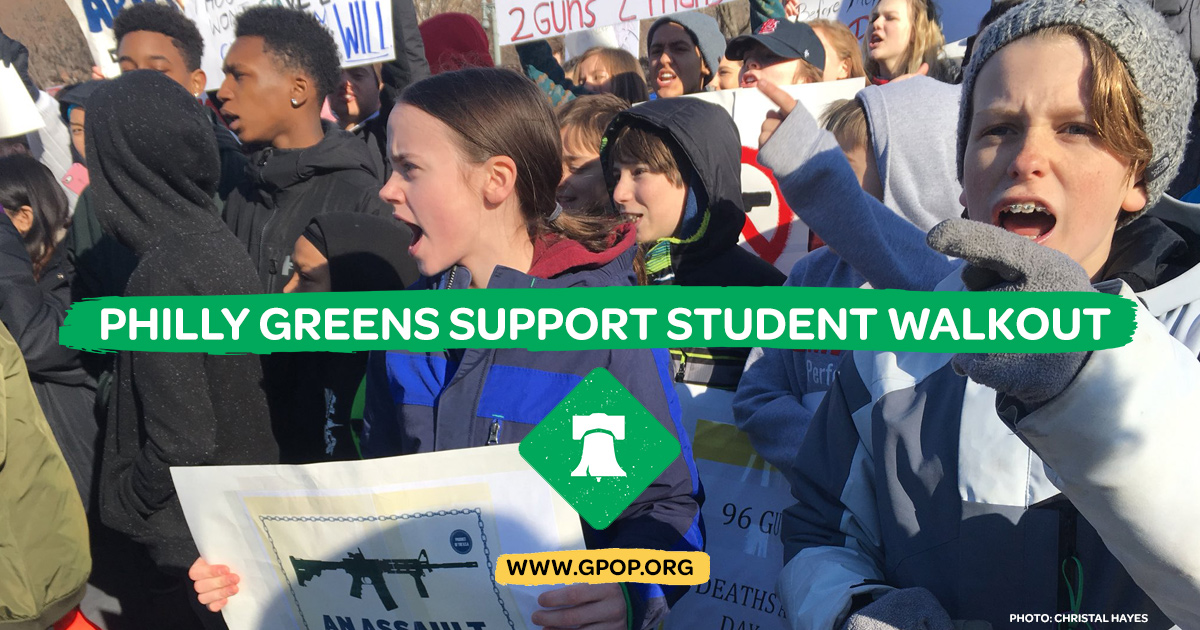 The Green Party of Philadelphia supports Philadelphia students participating in today’s National School Walkout to protest Congress’ inaction on gun control legislation. A vast majority of Americans support more gun control and our government's years of inaction is yet another example of how we do not have a functioning democracy. Today we stand with the students and call for action on gun control in the Pennsylvania legislature.

The recent gun control legislation passed in Florida marks a major victory for student and family activists from Parkland. "We salute the students of Marjory Stoneman Douglas High School for turning this tragedy into a call to action. It's thrilling to see young people stepping so powerfully and fearlessly into the role of activist to create the change they want, need, and deserve," said Michael Georgeson, GPOP City Committee Recording Secretary.

The new legislation in Florida, however, does not go far enough in meeting the demands of the student activists and the demands of millions of Americans. The Florida bill does not ban assault weapons, does not ban high-capacity magazines, nor does it strengthen background checks. The bill does, however, allow superintendents to arm school personnel, a provision introduced by Democratic State Senator Randolph Bracy. The Green Party of Philadelphia is baffled by this move as it ignores the clearly expressed views of both students and educators. The Green Party of Philadelphia is firmly against armed personnel of any form inside of schools and believe that more guns in schools will lead to more children being shot, especially children of color.

This conversation about school safety fails to acknowledge the structural disinvestment from and neglect of our children and from our social supports, thereby exacerbating social problems like poverty and inequality. Corporate politics have failed to connect the danger of school shootings with the original danger of structural inequality and the erosion of access to health and supports services. It’s alarming that politicians can find the money to arm school personnel but not supply them with living wages or basic supplies like paper and up to date textbooks.

We call for the Pennsylvania legislature to ban assault weapons, ban high-capacity magazines, and strengthen background checks. We also call for Greens in Philadelphia and beyond to support the student walkout by showing up at a walkout near you. As Claudia Elquist of the Green Party National Women’s Caucus said recently, "it’s time for us to simply show up, lend support, let the kids have the microphone ... this is the time to follow, not to just send out press releases to the public." We hope you’ll join us in applauding and standing alongside the students who choose to walk out today.