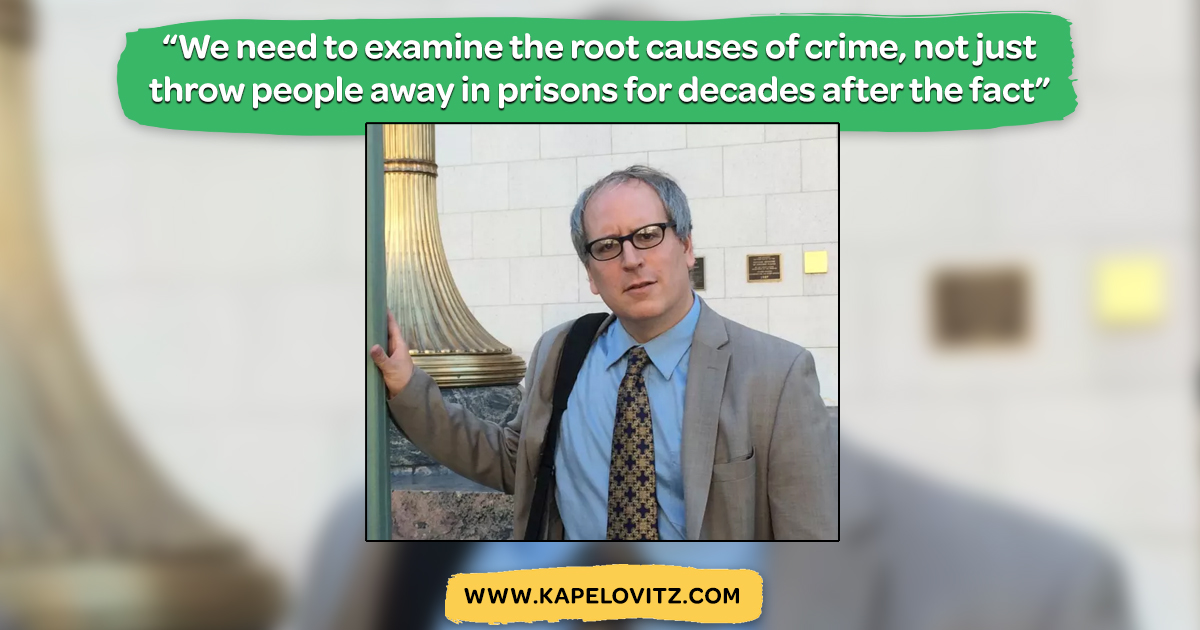 There are five candidates on the June 7 ballot who want to be elected attorney general. They are incumbent Rob Bonta, a Democrat appointed to the position last year; attorney/business owner Eric Early and general counsel Nathan Hochman, both Republicans; criminal defense attorney Dan Kapelovitz, a Green party candidate; and Sacramento County District Attorney Anne Marie Schubert, an independent. The top two vote-getters will advance to a Nov. 8 runoff. The San Diego Union-Tribune Editorial Board sent each a 10-question survey and here are their replies.

Below are Dan Kapelovitz’s responses and a link to other responses.

By The San Diego Union-Tribune Editorial Board
May 17, 2022

Q: What do you feel about current efforts to revise criminal justice reform laws like Propositions 47 and 57? What changes would you support?

A: The current efforts to revise Propositions 47 and 57 are just a reaction to the “tough on crime” fearmongers out there who think the answer to everything crime-related is more incarceration. I think the media and the “tough on crime” folks are using a few high-profile incidents to make it seem like crime rates are increasing much more than they really are. Proposition 47 made shoplifting in the amount of less than $950 a misdemeanor. It also made mere possession of a narcotic a misdemeanor. Most people in California agree that someone should not become a convicted felon for committing these relatively minor offenses. In terms of drug possession crimes, Proposition 47 does not go far enough because mere possession of drugs should be decriminalized. Drug addicts need treatment — not punishment. Moreover, drugs are pretty easy to find in the jails and prisons, so it’s not a great place to send someone with a drug problem. Under Proposition 57, prosecutors cannot directly file juvenile cases in adult court. This seems more than reasonable. In fact, this provision of Proposition 57 does not go far enough. Juveniles should not be tried as adults at all. Today, a juvenile can be sentenced to life in prison without the possibility of parole. Such a sentence for a minor should be a violation of the Eighth Amendment’s cruel and unusual punishments clause. Proposition 57 also allows for the possible early release of nonviolent offenders from prison. Proposition 57 is a step in the right direction, but to truly end mass incarceration, we need further improvements in sentencing reform and crime prevention.

Q: Crime is up statewide, creating debate over whether California should be more harsh or more lenient on people charged with crimes. What, if anything, should the attorney general do about the surge in crime?

A: We’ve seen that the “tough on crime” methods of the past few decades do not work. We need to work on preventing crime. We need to examine the root causes of crime, not just throw people away in prisons for decades after the fact. The length of a sentence has little to do with deterring crime. The typical person who commits a crime does not apply rational economic principles to his or her criminal decisions. They don’t say, “Well, the risk of me getting caught is X, and the length of my sentence could be Y; therefore, I should not commit this crime.” Most people who commit crimes don’t think they will ever be caught in the first place. As attorney general, I would work to get at the root of these problems so we can prevent crimes from happening at all. There are many causes of criminal activity, including poverty, drug addiction and poor mental health. We need to fund and promote intervention and treatment programs that address those and other issues.

Q: California has taken several steps in recent years to crack down on police abuses. Are there any additional measures you think are needed?

A: Instead of “defunding the police,” we need to reallocate funds to better train police officers and pay for trained specialists to deal with those incidents that do not require a police presence. Properly trained officers are taught to de-escalate a situation. Often that’s the difference between someone living or dying. We also need more transparency when it comes to police misconduct. California has one of the worst rules of any state in terms of police accountability. There needs to be a public database of incidents of police misconduct so that bad officers do not just move from jurisdiction to jurisdiction. Finally, the Office of the Attorney General should handle any prosecutions dealing with law enforcement. There is an inherent conflict of interest when county district attorneys prosecute crimes allegedly committed by people who routinely testify as their witnesses.

Q: California has the strictest gun laws in the nation yet has had some of the nation’s worst mass shootings this year. What, if anything, can the attorney general be doing to reduce gun violence in California?

A: As the question points out, even with the strictest gun laws in the nation, there can be horrible mass shootings. There are already more guns in America than people. Again, we need to get to the root cause of these mass shootings. We need to fund violence-prevention and threat-assessment programs.

Q: Gov. Gavin Newsom has endorsed California adopting a gun control law modeled on Texas’ abortion law, which allows people to sue those who help women get abortions. Do you support a law allowing Californians to file lawsuits like this over gun-related issues or not, and why?

A: I do not support such a law, just as I don’t support the Texas abortion law. Having citizens suing each other and spying on each other are not good ways to address an issue. Our country and state are already polarized enough without these kinds of lawsuits.

Q: Attorneys general in both parties have been criticized for writing ballot titles and summaries in a slanted way to try to influence voters. Should the attorney general retain this role? Or should it go to a nonpartisan office as reformers urge?

A: I have no problem with a nonpartisan office doing this work, so long as we can ensure that it is truly neutral in terms of the proposed law for which it is writing ballot titles and summaries.

Q: How would you as attorney general support or challenge any federal actions targeting the state’s estimated 2 million undocumented residents, and why?

Q: The climate emergency is worsening in California. Should the attorney general play more of a role to make local governments live up to laws they enacted to reduce emissions and the threat of global warming?

A: The attorney general should play a huge role in ensuring that local governments live up to laws enacted to reduce emissions and reduce the threat of climate change. It’s one of the most important issues of our time.

Q: The Attorney General’s Office has called out cities like Huntington Beach and Encinitas for not following state law related to housing construction. How aggressive would you be on this front?

A: I would aggressively fight cities who violate the law, especially where the law is meant to help address the housing crisis we currently face.

Q: Why should you be elected over your opponents in this race?

A: First, I am the most progressive of all of the candidates. I believe that the majority of Californians are more progressive than mainstream Democrats. But I am also open-minded and will work with and listen to people from the entire political spectrum.

Second, because crime is such a major issue this year, I believe that, as a criminal defense attorney who deals with criminal cases on a daily basis, I understand the issues better than my opponents. The other candidates either have little to no criminal law experience or they are just promoting the same old “tough on crime” policies that have failed us all these years.

Third, I will always do what I believe is right. I haven’t take a dime from any special interest groups. I’m not trying to use the position as a steppingstone to some other office. I’m not a career politician. Nor do I want to be. When I’m done with my term as attorney general, I will go back to fighting for justice for my clients.