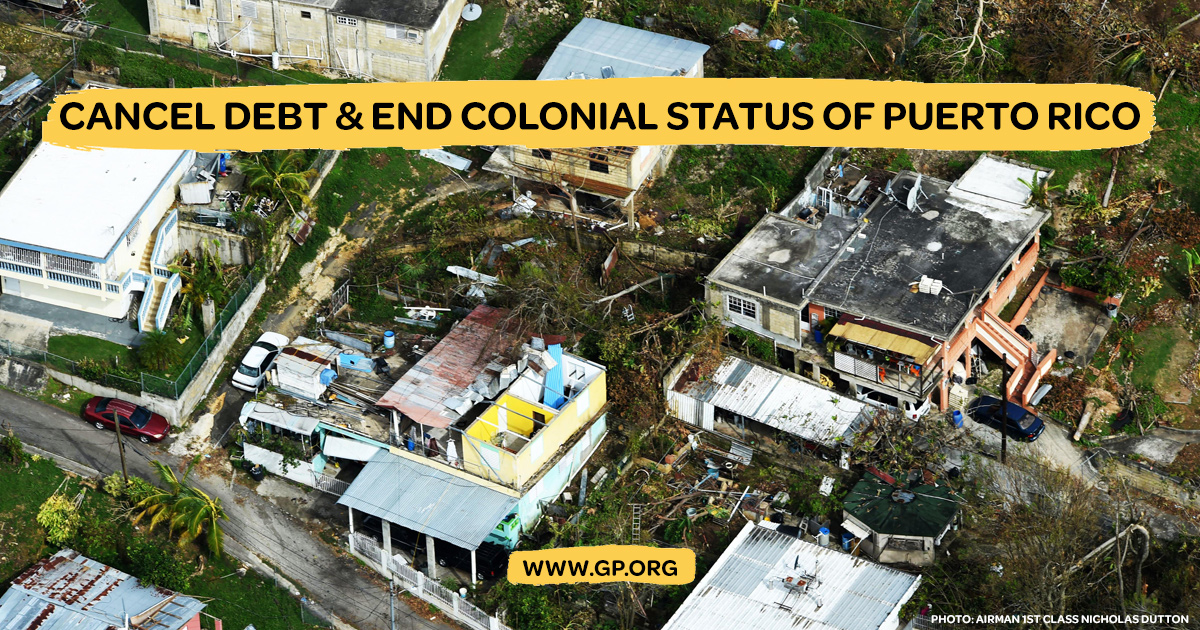 The Green Party strongly condemned President Trump's tweeted statements on Thursday that aid will be limited and that Puertro Ricans are to blame for their economic crisis. Greens called the tweets appalling and sadistic after the devastation wreaked by the storms and noted that Puerto Ricans pay taxes that support FEMA the same as everyone else.

"The rebuilding of Puerto Rico must take place according to the needs of its people, rather than as an investment opportunity for American businesses. The only way to ensure that is to enable Puerto Ricans to govern themselves as an independent nation and achieve prosperity for themselves. We call for an end to U.S. colonial control based on more than a century of occupation, exploitation, and racism," said Hector Lopez, member of the Green Party of Connecticut.

Greens said that the Puerto Rico Oversight, Management, and Economic Stability Act (PROMESA), ostensibly meant to lift the island out of debt, has intensified the island's colonial status.

"In 2016, with Puerto Rico unable to continue servicing its $74 billion debt, and blocked from traditional bankruptcy proceedings by its 'special' political status, Congress passed legislation in an attempt to address the crisis. PROMESA, as the legislation is known, put Puerto Rico’s finances in the hands of a federally appointed junta that effectively exercises veto power over the budget and major expenditures of the government.... The junta running the budget has attempted to squeeze every penny out of the economy, pushing harsh austerity policies on the American citizens of Puerto Rico." ( Jake Johnston, Market Watch, Oct. 5).

The Green Party of the United States endorses independence, decolonization, and self-determination for Puerto Rico in its national platform.

Greens also support permanent repeal of the Jones Act (Merchant Marine Act of 1920), a law imposed on the island that enforces dependence by mandating that all deliveries to Puerto Rico, including food, must be conducted by U.S. ships. President Trump authorized a temporary suspension of the Jones Act in September.

On June 19, Green Party co-chair Darlene Elias addressed the U.N. Decolonization Committee on Puerto Rico and called on the U.S. to "sever its ties with Puerto Rico completely and allow for its people to live free of colonial rule for once and for all."

"[T]he U.S. as the colonizer is taking advantage of the people of Puerto Rico and reaping the island of all of its resources," said Ms. Elias in her speech. "Venture capitalist have been permitted to start up businesses in Puerto Rico, buy up property, and pay little to no taxes in the name of profit and to the detriment of Puerto Ricans living on the island. Furthermore, Puerto Rico is not allowed to trade freely and pays up to three times more for goods, and services. With a low gross domestic product, a poverty rate of 50%, and an unemployment rate of 12%, Puerto Rico is on the brink of collapse without the necessary revenues to invigorate and stabilize its economy."

"A decentralized sustainable energy system with locally controlled microgrids would end the inflated electrical rates that Puerto Ricans are forced to pay. It would also help fight the advance of global warming that has contributed to the severity of storms like Maria," said Ms. Elias, who is also co-chair of the Green Party's Latinx Caucus.

Yarimar Bonilla, in The Washington Post on Sept. 22, wrote "Puerto Rico already had a higher rate of income inequality than any U.S. state, and it has only been made worse by tax incentives used to lure investors at the expense of a depleted public sector. Puerto Rico’s Act No. 22 allows wealthy investors to evade federal and local income tax by spending a minimum of 183 nights a year on the island. These types of initiatives promote the arrival of wealthy retirees and part-time Caribbean residents, who are able to erect multimillion-dollar mansions complete with hurricane-proof bunkers, while many of those born and raised in these societies must rely on public infrastructure that has been deeply eroded to service foreign debt and provide tax breaks."

Ms. Bonilla warned that an aid package from the Trump administration "will do little to alleviate long-standing disparities or to remedy the conditions that put Puerto Rico at greatest risk. More likely, the expedited management of emergency money will only serve to fuel the drive for increased privatization and the gutting of public services."

Greens said that the solution was not fiscal policy oversight and federal bail-outs that maintain Puerto Rico's status as an empire's dependent colony, but independence and reparations for wealth and resources stolen from the Puerto Rican people during the last 119 years.

Puerto Rico Goes Dark After its Power is Stripped: Hurricane Maria wreaked havoc on Puerto Rico, but massive debt and a crumbling infrastructure put the island in crisis long before the storm
Interview with Monxo Lopez, The Real News, September 22