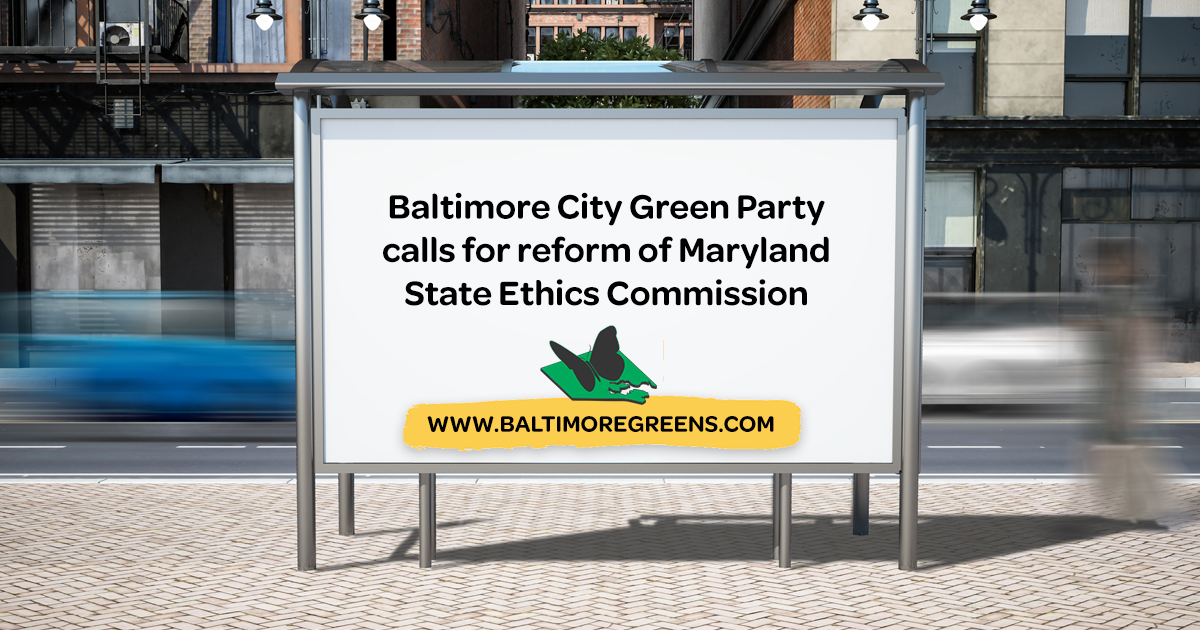 BALTIMORE – February 21, 2022 – On the two year anniversary of an ethics complaint against Governor Larry Hogan, The Baltimore City Green Party is calling on the Maryland State Ethics Commission and Maryland General Assembly to reform how ethics complaints are processed.

Originally filed on February 20, 2020, by Kevin Zeese, Esq. (deceased), the ethics complaint was against Governor Hogan regarding his unethical use of Maryland transportation policy to funnel money to projects adjacent to his real estate holdings while in office.

There is no public record of how the Maryland State Ethics Commission handled this complaint or how it handles other complaints against elected officials. It is currently illegal for complainants to publicly discuss complaints they've filed, and there is an expectation of confidentiality on all participants in the process.

"Right now the Ethics Commission has an abusive 'our little secret' approach to responding to citizens' ethics complaints against powerful public officials; it is very difficult for grassroots organizers to build a campaign to hold officials accountable. That needs to change: ethics complaints against elected officials should be part of the public record and should not be hidden behind a cloak of confidentiality," said Andy Ellis, Baltimore City Green Party Steering Committee Member.

Ellis continued, "Dan Cox's impeachment stunt grabbed a day or two of headlines for his Trump-fueled Gubernatorial campaign. What he failed to grasp was that Hogan's principal legal and ethical transgressions while in office were and are his control over Maryland transportation policy to funnel money into projects adjacent to his real estate holdings. Whether it's canceling the Red Line, building luxury lanes on the Washington beltway, or the open grift at the heart of this ethics complaint, Hogan showcases a pattern of behavior in which his policy, ideology, and business interests align neatly over and over again to the detriment of transit-deprived communities in Baltimore City and across the state."