Reject militarism on the anniversary of 9/11 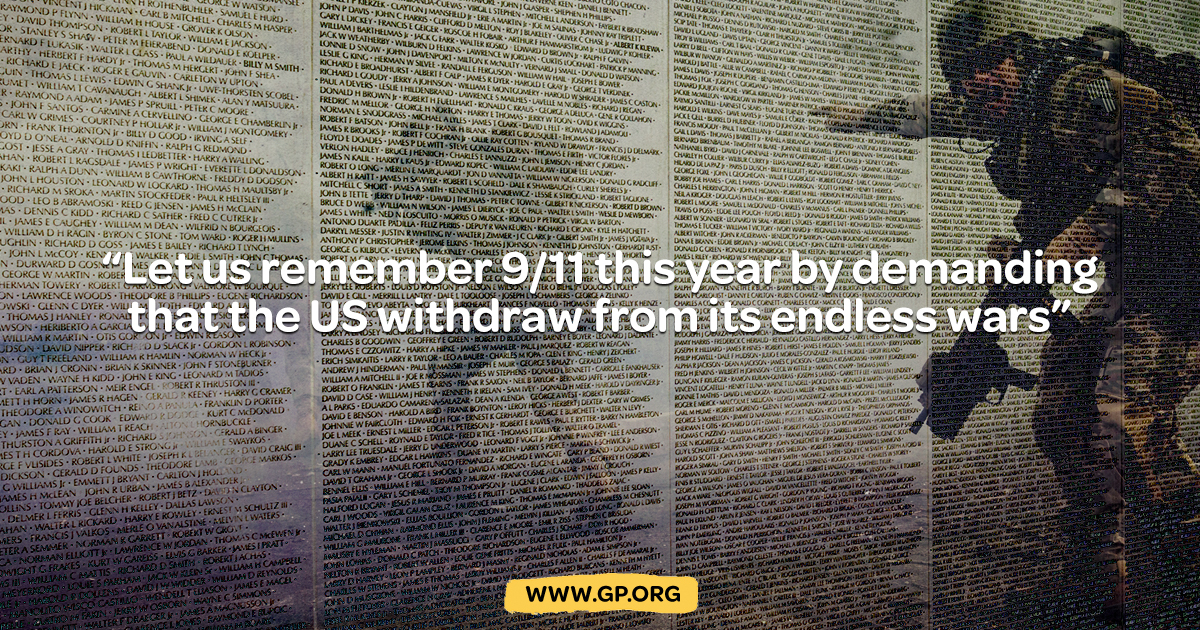 The September 11, 2001 attacks on the US have obscured “The Other 9/11,” the US attack on Chilean democracy in the US-backed coup on September 11, 1973. The two 9/11s are connected by what the CIA calls “blowback.” The CIA first used the term in describing the unintended negative consequences of the US and UK sponsored coup against the democratically-elected government of Mohammed Mossadegh in Iran in 1953. The September 11, 2001 attacks were blowback from decades of US intervention in the Middle East. That doesn’t justify the terrorism, but it does explain it. If we want peace and security for our nation, we should respect the peace and security of other nations.

Contrary to Trump’s lies about ending the endless wars, his administration has escalated the “Long War” in the Middle East and North Africa with increased troop deployments, drone strikes, and Special Operations.

Trump encourages these actions with statements that amplify paranoid far-right fantasies that call climate change and COVID-19 hoaxes perpetrated by secret elite conspiracies. Trump has instructed the Immigration and Customs Enforcement’s (ICE) and Border Patrol to violate immigration laws and subject immigrants and asylum seekers to unspeakable brutality, including separating children from their parents and internment in concentration camps where COVID-19 is running rampant. He stokes racial fears and civil strife to justify authoritarian rule. He calls the news media “fake,” the elections “rigged,” and promotes conspiracy fantasies on Twitter. Trump is sowing confusion and demoralization so people will not be able to resist repression by sections of law enforcement and the racist militias should Trump decide to resist a peaceful transfer of power. The ultimate blowback against US coups and wars abroad against democracy threatens to be a coup against democracy at home.

End the Wars on Terrorism Abroad and Dissent at Home

One of my first steps as President would be to end the wars on “terrorism” abroad and at home. Neither major party calls for ending the endless wars against “terror” abroad even though the top priority in the official National Security Strategy of the United States has changed to “Great Power Competition” with the goal of preventing the emergence of strong regional powers in Eurasia, namely China, Iran, and Russia. This New Cold War, like the War on Terrorism, is about the profits of US-based global corporations abroad, not the security of the people of the United States at home.

The nuclear modernization program initiated under Obama and continued under Trump with bipartisan support has destabilized the nuclear balance of terror and kicked off a new nuclear arms race. The nuclear threat, coupled with inaction by the great powers on the climate emergency and the proliferation of disinformation propagated by state actors on all sides that makes it difficult for publics to come to agreement on what to demand of their governments, has prompted the Bulletin of the Atomic Scientists to move their Doomsday Clock the closest it has ever been to midnight.

I would end the saber rattling against Russia, China, and Iran in the Great Power Competition strategy and focus on diplomacy. We need to partner with other major powers to address our common problems, notably nuclear arms, climate, and cyberwar.

I would also end the bipartisan repression of dissent at home. With Trump’s encouragement, law enforcement is using militaristic tactics to suppress peaceful protests against police brutality and systemic racism. Both major parties are united in suppressing whistleblowers like Edward Snowden and publishers like Julian Assange, whose real crimes in the eyes of the National Security State is that they exposed its secret wrongdoings.

The US should speak out against violations of human rights and democracy wherever they occur, but that should not preclude also working with authoritarian governments to resolve life-or-death global issues like climate change and nuclear arms. War and threats of war are the most powerful destroyers of civil liberties, democracy, and human rights. Military threats, economic sanctions, and covert meddling in the politics of other countries only reinforces the nationalist rationalizations of authoritarian governments for repression at home in order to ward off threats from abroad.

The most powerful way to promote human rights is to set a good example. If the US wants its advocacy of human rights to be credible and effective, it must set the right example at home, where police killings of Black people are seen on social media around the world.  A country where there is mass incarceration in the largest prison system in the history of the world, and from where the US military is deployed in some 800 foreign military bases for its endless wars, making the US the nation that the world’s people consider the biggest threat to peace. 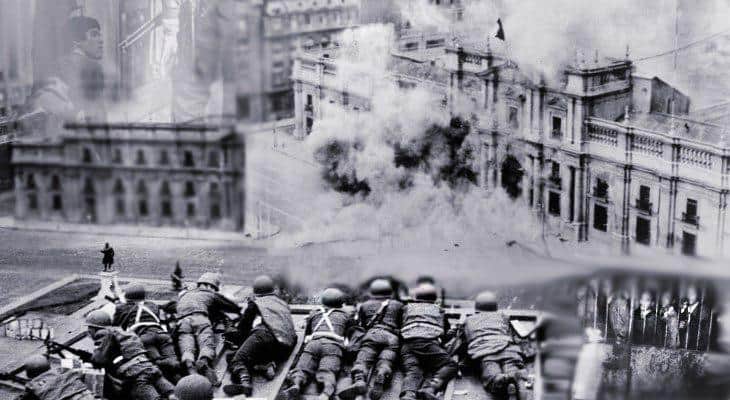 Thirty years before the United States’ 9/11, the CIA orchestrated the violent overthrow of the democratically-elected socialist government of Chile on September 11, 1973.

It is a tragic coincidence of the US bloody intervention history in Latin America that President Salvador Allende was overthrown and pushed to suicide on the same date that decades later would affect US soil by a terrorist attack. The same feelings that American felt of being violated by the first foreign attack since Pearl Harbor were felt in Chile that September 11 in 1973. The sin of Salvador Allende in the eyes of Nixon, Kissinger, and CIA Director Richard Helms was to advance deep socialist reforms that would create a more equal society, a just distribution of incomes, real freedom of expression, and a truly democratic framework that could allow, finally, the participation and voices of all sectors, specially the impoverished workers of Chile.

Sound familiar? These are exactly the challenges that the US faces today, problems that have riddled the US throughout its history and become worse in the Trump era – the authoritarian duopoly of Republicans and Democrats, voter suppression, third party suppression, deep inequality from coast to coast, and chronic poverty. It is the same kind of repression that Chile suffers today under the conservative millionaire Sebastián Piñera when people again advance the same reforms that Allende worked for and paid for with his life. It is the same social, economic, and political oppression that the two countries share on this anniversary of 9/11.

In the immediate aftermath of the 9/11 attacks in the United States, the Green Party of the United States warned against the danger that the two major parties and the corporate media would turn this horrific crime into a rationale for destructive wars abroad and political repression at home.

Instead of treating the 9/11 attackers as criminals to be brought to justice, the US used the attacks as a pretext for a long series of regime change wars in the Middle East and North Africa. The foreign policy leadership of the Bush administration had already written about the need for a “new Pearl Harbor” in order to provide the pretext for an invasion of Iraq to seize its oil fields. They wasted little time in getting started after 9/11.

The Authorization To Use Military Force (AUMF) against the perpetrators of the 9/11 attacks passed Congress on September 18 with only one dissenting vote. The US invasion of Afghanistan started on October 1. The AUMF legislation is still the legal basis for today’s endless wars.

The Patriot Act, which gave the federal government broad new intrusive surveillance and investigatory powers that weakened civil liberties, was overwhelmingly voted through Congress by October 25.

The Bush administration, joined by the Democratic amen corner led by Senator Joe Biden, lied about weapons of mass destruction and about Iraq’s alleged role in 9/11 to start a second war in Iraq by March 2003.

After 19 years, US combat troops are now engaged in 14 wars. At least 37 million people, and as many as 59 million people, have been displaced by these wars, creating the greatest refugee crisis since World War II.

The annual observation of 9/11 has been turned by politicians into a militaristic celebration of American power that is used to garner public support for US military spending and imperial aggression abroad. Right after 9/11, the world was united in its grief for our country. It was a moment that should have been used to build peace based on mutual cooperation and respect.

Let us remember 9/11 this year by demanding that the US withdraw from its endless wars, prioritize diplomacy to resolve conflicts, end arms sales to belligerents, and provide humanitarian aid for war refugees, including reopening immigration to the US from these countries.

Let’s turn the US into the world’s humanitarian superpower instead of its global military empire. Providing aid instead of arms is the best way to promote peace and security. It is time for the US to make friends instead of enemies.