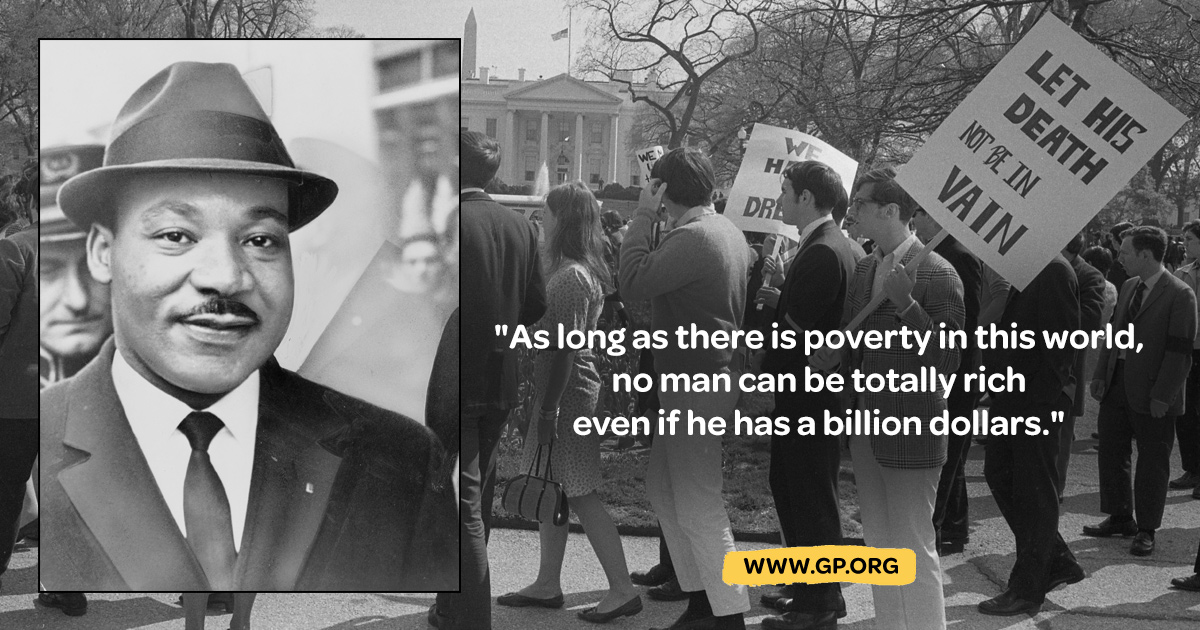 Today memorializes the assassination of Rev. Dr. Martin Luther King, Jr. Dr. King's death was undoubtedly one of the most horrific crimes of the century. 50 years later, while reflecting on his life, we must ask ourselves where are we in reference to what he stood and fought for?

Examining many areas that Dr. King battled, we can first look at poverty issues. In 1968, only 10% of whites lived in poverty while almost 34%, if not more of blacks were also devastated. Before he died he began organizing a Poor People's Campaign to dramatize the plight of poor folks in America and to signify that as a collective voice they demanded change and action.

On May 28, 1968, one month after King's assassination, the mass Anti-poverty march took place. Individuals from across the nation erected a tent city on the National Mall, in Washington, calling it Resurrection City. The aim was to bring attention to issues surrounding poverty.

This is why the Green Party of the United States National Black Caucus fully supports Cheri Honkala's Poor People's Economic Human Right Campaign. Because 50 years later we are still in combat with oligarchs and corrupt politicians, etc. that have no compassion on the state of poor people.

Today's black poverty rate of 22 percent is almost three times that of whites. Compared to the 1968 rate. There has not been any significant improvement. It is important that the Green Party partners with campaigns and movements that are led and organized by people that can articulate their specific area of oppression.

Dr. Martin Luther King's stance on poverty: "As long as there is poverty in this world, no man can be totally rich even if he has a billion dollars."

Another area that is definitely troublesome post Dr. Martin Luther King's assassination is police brutality. Just recently, Stephon Clark was shot 20 times in his grandmother's back yard in Sacramento, California. He was unarmed and only holding a cellular phone. As a party, and as individuals, we must continue to rip apart multiple layers of policies that have been created to expand police and military powers.

Dr. Martin Luther King had this to say: :We can Never be satisfied as long as the Negro is the victim of unspeakable horrors of police brutality." 50 years later we see black and brown bodies mortified by Law Enforcement and worst. They are being exonerated of murdering black folks. The dream must now become a reality that we will not be silent and consent to such horrors. Therefore, in respect of of this 50th year of MLK's assassination and his work to eradicate these and other evils, the Green Party's National Black Caucus demands Law Enforcement to withdraw immediate occupation from our communities: We will secure our own properties. Next, MLK had a complete understanding of the maliciousness of military force local and abroad. We demand an end to wars, surveillance, drone attacks, political take overs around the globe. "I knew that I could never again raise my voice against the violence of the oppressed in the ghettos without having first spoken clearly to the greatest purveyor of violence in the world today, my own government."

Black Caucus of the Green Party of the United States