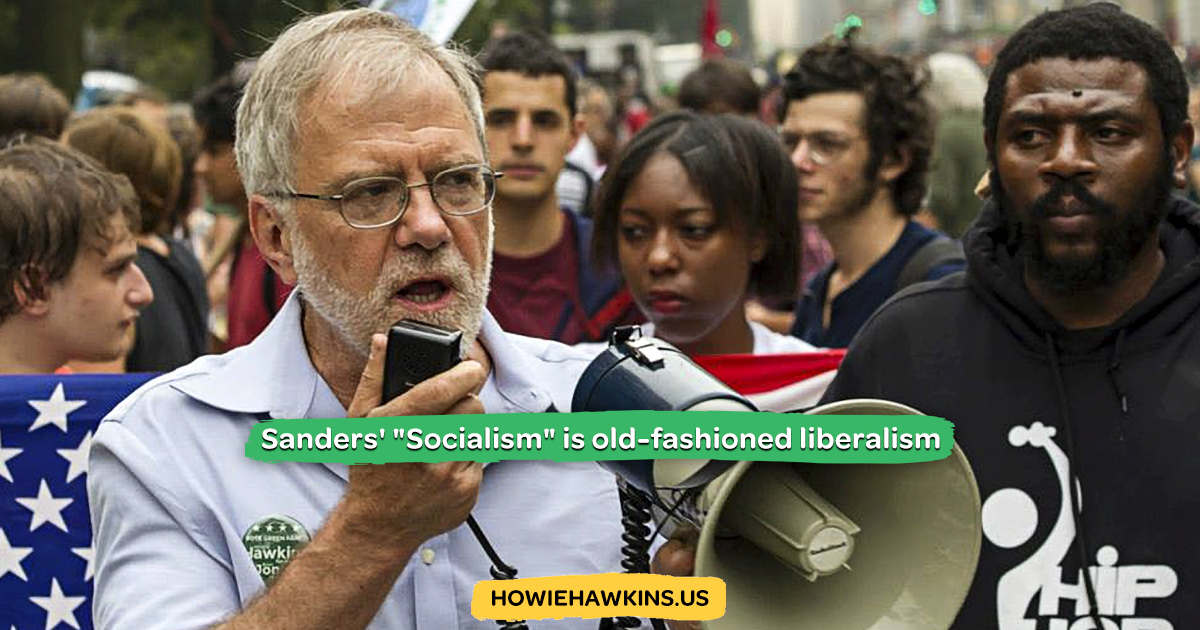 But Sanders isn’t helping the socialist cause by confusing it with the old New Deal liberalism of FDR. As Norman Thomas, the Socialist Party’s 1936 presidential candidate, famously quipped in a radio address, “Roosevelt did not carry out the Socialist platform, unless he carried it out on a stretcher.”

Socialism has traditionally meant social ownership and democratic administration of the economy. That’s the dictionary definition. That’s the socialist tradition. One can see that from this old membership card of the UK Labour Party, a party nominally committed to democratic socialism from 1918 until the Tony Blair’s “Third Way” neoliberals got Clause IV deleted from the party constitution in 1995).

Now Bernie Sanders is deleting economic democracy based on social ownership of the major means of production from our understanding of socialism.

As he said in his November 2015 speech on democratic socialism, “So the next time you hear me attacked as a socialist, remember this: I don’t believe government should own the means of production….”

When he returned to the topic of democratic socialism again on June 12 this year, he never said a word about any kind of social ownership. Nothing about the worker cooperatives he touted in his 2016 book, Our Revolution. Nothing about the idea Sanders had floated just two weeks before the speech of socializing companies by requiring them to regularly put a portion of their shares in a fund controlled by workers.

Democratic socialism for Sanders in his speech is simply fulfilling an updated version of President Roosevelt’s 1944 call for an Economic Bill of Rights, which Sanders defined as:

These are rights that socialists support. I have campaigned for this sort of Economic Bill of Rights in three campaigns for New York governor since 2010. It was our Green alternative to the public austerity that both Democrats and Republicans were proposing in the wake of the 2008 housing and financial meltdown. We called it the Green New Deal.

Socialism is a different system of economic organization from capitalism. Sanders never addresses how capitalist property relations divide society into class hierarchies with the billionaire class on top.

Under capitalism, workers are exploited. The owners, not the workers—the takers, not the makers—grab for themselves the wealth that workers create with their labor. Workers get a fixed wage, while capitalists take all the profits. Under socialism, workers receive the full value of their labor. The net income after paying for production costs (equipment, materials, supplies, taxes, etc.) is distributed to the workers in proportion to their labor contribution. This socialist system of distribution yields an equitable distribution of income in the first place at the point of production. Sanders’ tax and transfer social programs only partially compensate after the fact for exploitation and its inequitable distribution.

Capitalism is prone to economic crises due to overproduction during market booms, leading to excess inventories and layoffs during market busts. These recessions and depressions impoverish workers and further concentrate wealth as the bigger capitalists buy up assets at deflated prices. A socialist economic democracy can plan for stable production without boom and bust cycles, but Sanders gives no indication that this is part of the case for socialism.

Socialist economic planning also enables an ecological socialism of sustainable production of enough to meet people’s material needs without exceeding ecological limits. Capitalism, on the other hand, is a system of blind, relentless growth driven by its competitive structure, which requires capitalist firms to grow or die in the competition for market shares and profits. Capitalist growth disregards ecological limits and is destroying the ecological foundations of the human economy.

Sanders’ call for “the right to a clean environment” requires ecosocialism. But Sanders’ says nothing about how “democratic socialism” is needed to realize this right, particularly with respect to the climate crisis. Exxon, Chevron, and the Koch Brothers will never reinvest their earnings from fossil fuels into clean renewables. Big Oil must be socialized along with power utilities, railroads, banking, and other key sectors in order to plan the rapid transition to 100% clean energy across all productive sectors, from electricity and transportation to agriculture and manufacturing. The federal government took over or built a quarter of US manufacturing capacity during World War II in order to turn industry on a dime into the “Arsenal of Democracy” that helped beat the fascists. We need nothing less to defeat climate change.

Capitalist competition also generates war. Global corporations enlist their home-based nation-states and militaries in an international competition for resources, markets, cheap labor, and geopolitical military positioning. This capitalist international structure produces endless wars and the inevitability, sooner or later, of global nuclear annihilation by the nuclear-armed states if we don’t change the system. Socialism’s international cooperation would build peace based on mutual aid in place of capitalism’s competitive nationalistic militarism.

The jingoistic display of a dozen American flags as the total backdrop for Sanders’ 2019 socialism speech was the antithesis of socialist internationalism. The speech said nothing critical about the US global military empire or about socialism as the alternative to capitalist imperialism and the path to peace.

Sanders’ presentation of liberal social programs as “socialism” fails to address the power rooted in the private ownership and dictatorial control of the means of production. Dictatorial control extends well beyond the workplace where employees work as directed by supervisors without many of the constitutional protections of the Bill of Rights. Capitalist economic dictatorship encompasses the whole economy and the government. Without socialist economic democracy, programs to implement the Economic Bill of Rights will be resisted or, if passed, rolled back by the capitalists because power will remain in their hands.

Concentrated economic power under capitalism yields concentrated political power for the capitalist class. This power is obviously exercised through campaign donations, advertising, and lobbying. But it is also expressed directly in the economy. Capitalists can strike, too. They can refuse to finance government borrowing. They can withhold or offshore investments, depress the economy, and blame the reformers. Usually, the threat of these measures is sufficient to bring progressive reformers to heel. The capitalists who exercise this private economic power are not up for election.

Sanders’ liberalism is vulnerable to the capitalist veto because it depends on taxing the capitalist economy to fund the social programs. Capitalists don’t want to pay taxes and are especially opposed to taxes that fund social programs that strengthen the economic security and therefore the bargaining power of the working class. A Sanders administration would have to pander to the capitalists or face economic sabotage. Bill Clinton found this out. He was instructed during the transition planning for his presidency by Goldman Sachs’ Robert Rubin, who became his top economic advisor and treasury secretary, that he would have to drop his modest reform program of education spending, public works, and middle-class tax cuts in order to show the investor class the fiscal austerity they demanded. Clinton exclaimed, “You mean to tell me that the success of the economic program and my re-election hinges on the Federal Reserve and a bunch of fucking bond traders?” Clinton found out that the US bond market—a few thousand traders working for a handful of investment banks—had veto power over his economic program.

Democracy needs socialism. Political democracy requires economic democracy. Socialist economic democracy based on social ownership and democratic administration of the economy is needed so people have the power to enact and maintain an Economic Bill of Rights.

THE ECONOMIC BILL OF RIGHTS AS AN ANTI-RACIST PROGRAM

Sanders’ Economic Bill of Rights will be popular with working class voters. Public opinion polling has consistently shown majority support for government action to realize these rights from the 1940s up to today. I am again campaigning for it as I have in past campaigns.

But in addition to calling for socialist economic democracy as necessary for securing these economic rights, I am also saying the Economic Bill of Rights must be implemented in a way that reverses the growing racial wealth gap and the increasing segregation in housing and segregation that we have experienced since the 1980s. It was disappointing that in Sanders’ unvarnished praise of FDR’s New Deal that he did not acknowledge and correct for the racial bias in its implementation. Social Security at first excluded sharecroppers, farmworkers, and domestic workers, which disproportionately excluded black people and poor people of every color. The administration of the Home Ownership Loan Corporation, the Federal Housing Administration, and the public housing program discriminated against black people and increased segregation, as did the education and housing programs of the GI Bill. New Deal policies increased the economic gap between black people and white people.

It was Martin Luther King Jr., whom Sanders cites favorably in his speech, and other civil rights leaders who picked up the torch for FDR’s Economic Bill of Rights in the 1960s. With their 1963 March on Washington for Jobs and Freedom, 1966 Freedom Budget, and 1968 Poor People’s Campaign, they demanded an Economic Bill of Rights, but this time with the indispensable addition that the programs be administered equitably without racial discrimination. That is the anti-racist torch we must pick up today in campaigning for the Economic Bill of Rights. Anti-racism is one of the reasons we call for a Green New Deal in order to distinguish it from the racism of the old New Deal.

Those 1960s civil rights leaders saw their demands for universal economic rights as a means of undermining the white racial backlash that was then mounting in reaction to the passage of federal civil rights laws. White workers were being mobilized against civil rights and desegregation by the Dixiecrat Democrats and the Goldwater Republicans. Black people were scapegoated as a threat to white workers’ jobs and economic well-being. Competition for limited opportunities and resources provided a material underpinning for white racism. In turning “from civil rights to human rights,” the civil rights movement believed they needed to secure economic rights for all in order to secure civil rights for black people. They intended to undercut racism by leading an interracial movement of poor and working people for economic rights for all. As A. Philip Randolph, the socialist labor leader who conceived of the March on Washington, put it, “We must liberate not only ourselves, but our white brothers and sisters.”

The failure of the Democrats to implement the Economic Bill of Rights during the Johnson administration when they held the presidency and both houses of Congress in the 1960s ultimately led to the white backlash taking power today in the form of Donald Trump. An important part of the way to beat back his negative program of racist scapegoating is still the same: a positive program of economic rights for all. Old-fashioned New Deal liberalism is not enough. It will take socialist economic democracy to secure economic rights for all.