Lisa Savage: As U.S. senator, I'll stand up to neo-McCarthyism, say 'no' to U.S. wars 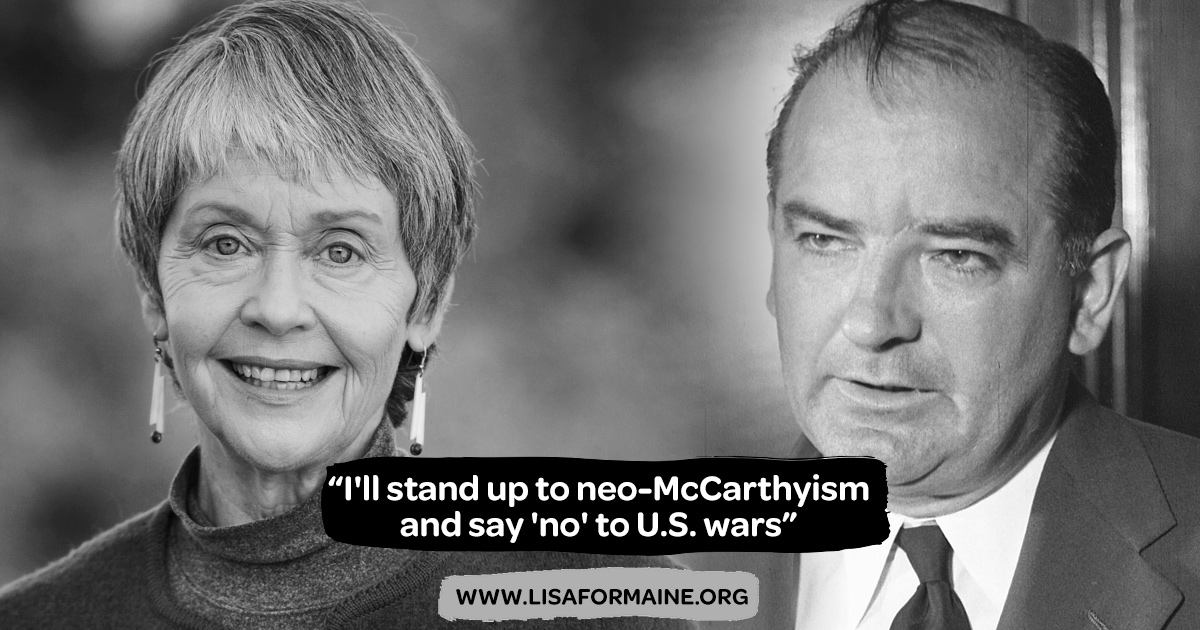 Who will stand up to today's neo-McCarthyism?

In 1950, a neophyte senator from Maine stood to address the U.S. Senate. Margaret Chase Smith was in her first term, the first woman elected to both the House and Senate, and the only woman in the Senate. It was famously her "Declaration of Conscience."

Without mentioning his name, she dared red-baiting Sen. Joe McCarthy to call her a communist or unpatriotic. "Those of us who shout the loudest about Americanism in making character assassinations are all too frequently those who, by our own words and acts, ignore some of the basic principles of Americanism," Sen. Smith told her stunned colleagues, many quaking in their shoes lest McCarthy accuse them. Careers had been ruined by accusations of allegiance to communism over U.S. interests.

Besides catapulting Sen. Smith to lasting fame, her remarks effectively changed the course of the reign of fear now taught to history students as McCarthyism.

Today, a new McCarthyism has established itself in the public discourse, whereby anyone who questions the mainstream political establishment must be "working with the Russians" – or perhaps even "Putin's puppet."

Who will stand up to it?

After losing the 2016 election, Hillary Clinton's Democratic Party machine shifted into overdrive to blame not simply Russian meddling in our election via social media and hacking, but an active coordination between her rivals and Vladimir Putin's Kremlin.

And while Clinton now claims she said that U.S. Rep. Tulsi Gabbard was being groomed by Republicans, not Russians, for a third-party run, Clinton loyalists are still flooding social media with charges that Gabbard is also a "Russian asset."

What do Stein and Gabbard have in common that would draw this kind of unfounded accusation?

Quite simply: their opposition to the seemingly endless, costly, climate-destroying "global war on terror" and its many iterations. Daring to believe the U.S. should not have 800 foreign military bases in 70 countries makes you a Russian asset, just as daring to support such "communist" ideas as labor unions, child labor protections and civil rights made you a communist in the early 1950s.

This fall I attended a town hall billed as "with or without Sen. Susan Collins," put on by a Democratic Party-aligned group. Constituents posed carefully vetted questions to the absent senator, who hasn't held a town hall in decades. In 90 minutes, there was not a single mention of the wars, the military, the Pentagon or even the troops we pay lip service to supporting. Amazing.

Recently, politicians of both corporate parties celebrated the extrajudicial killing of ISIS leader Abu Bakr al-Bagdhadi and a number of associates – even children – but no one was talking about the U.S. military policies and blunders that led to the rise of ISIS in the first place. Amazing.

Or maybe it's not so hard to understand.

Those speaking up about ending U.S. wars meet with neo-McCarthyism: smear campaigns and déjà vu Russia-baiting for anyone who brings these apparently unwelcome subjects into public discourse. Perhaps the taboo is related to the nearly $30 million the defense industry gave to congressional campaigns in the 2018 election cycle.

My paternal grandfather, state Sen. Brooks Savage, went to high school with Sen. Smith; they remained friends for life as both entered politics. He didn't like bullies any better than Sen. Smith did. When threatened by a lobbyist who promised to hurt his career if he didn't vote the way they wanted him to, his reply, according to family lore, was that he couldn't be hurt except by his son or his wife.

He also told his only child, my father, "Don't believe them when they say the next war is a good one. There is no such thing." I never knew my grandfather, but I've carried that wisdom with me into my campaign.

It's time to send a senator to Washington with the courage to stand and say "no" to endless, costly, unwinnable wars. I'll be proud to speak up – no matter how they try to assassinate my character.

Lisa Savage of Solon is a teacher, founder of the Maine Natural Guard and candidate for the Maine Green Independent Party nomination for U.S. Senate.