Statement by Lisa for Maine campaign 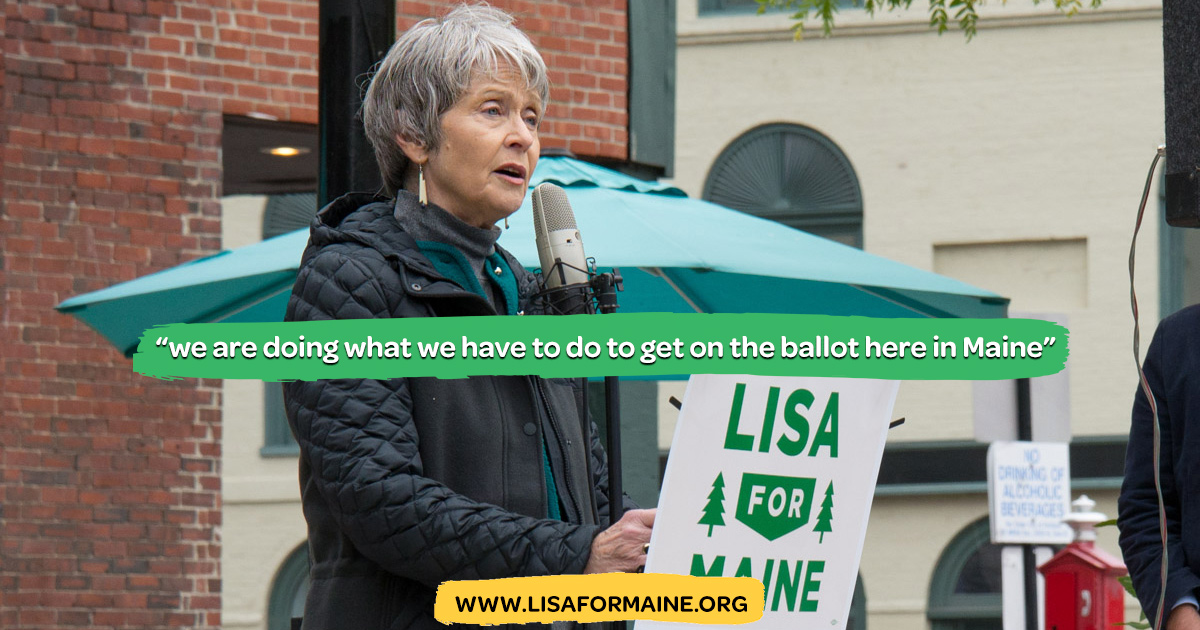 GRAY, Me – Today we are announcing a fresh approach to ballot access in order to elect Lisa Savage; a senator for people, planet, and peace. We will continue to identify as Green, while formally switching to independent “unenrolled” status in order to simplify the process of getting on the ballot. We see this pivot as a big opportunity to expand our base and make it possible to reach a wider audience with our Green message. We greatly appreciate all the work that our supporters have already put in to get us where we are, and we hope you’ll continue on the journey with us after taking a well-earned hiatus from signature gathering until our next big push on March 3rd, Super Tuesday.

We have put thousands of dollars and thousands of person hours into making every effort, guided by veteran professional staff, to gain access to the ballot for U.S. Senator as a member of the Green Party. However, we have come to a conclusion: the major parties have created a task that is virtually impossible, made all the more difficult by their relocation of the presidential primaries smack in the middle of the time period for ballot access. It’s no wonder the Secretary of State, himself, admitted that the already difficult task of collecting 2,000 Green Party signatures is now “much harder.”

We are, however, undaunted. We know the Green message of people, planet and peace over profit is resonating strongly with people all over Maine. We know there must be a Green voice in this campaign and on this ballot. Therefore, we are left with no other choice: Lisa must run as an independent.

This gives us the time -- we’ll have until June 1 -- and the access to voters we need. Now, everyone in Maine who agrees with our policies (and almost all of them do!), will be able to sign our petition and indicate they want Lisa on the ballot and using ranked choice voting to bring her voice of the people to Washington on our behalf.

Thank you so much for your commitment and effort thus far. Thank you for continuing to work for this campaign and putting in every possible effort to undo the damage these ruling parties have done to our democracy, bringing the people of Maine back into the conversation of how we should empower every last citizen of our great state.

I am deeply grateful for, and cognizant of support in so many forms from, Greens around the country and Maine. The realization that we would not make ballot access running as a Green in Maine led our team to consider an alternative path to the ballot.

We are reaching out to our hard working volunteers and our supporters to say thank you for getting us this far and we hope you will join us on the next stage of our journey. Even Maine’s Secretary of State admitted to a reporter for the Bangor Daily News that the system was unfair to third parties. The Democratic Primary happening for the first time in Maine on Super Tuesday also ate into our time to gather signatures. So we are doing what we have to do to get on the ballot here in Maine, which is to run as an Independent. I will be seeking endorsement by the Maine Green Independent Party, and my platform remains as Green as ever.

A press release will go out today sharing news of the pivot. I am excited for our next step because we're in it to win it!