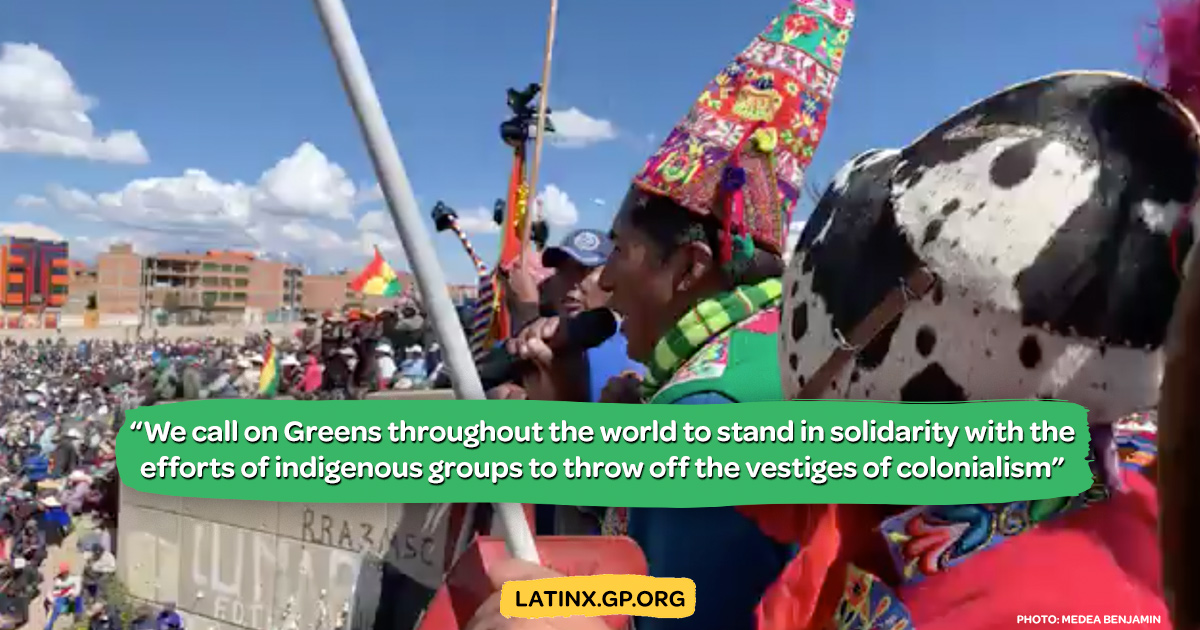 In response to the abuses that have been perpetrated by the illegitimate government of Jeanine Anez, that took power in Bolivia in a coup de tat perpetrated by a cabal of the military and the wealthy elite, the Latinx Caucus of the Green Party of the US calls on the OAS, the US government, the United Nations, and all governments of the region to be vigilant in support of democracy. Upcoming elections must be fair and honest. We further call for a halt to the renewed persecution and violence against indigenous people in Bolivia. Since the coup 17 pro-Morales protesters have been killed by the police and about 150 have been injured.

The Latinx Caucus of the Green Party of the United States
latinx.gp.org

MAS, Movimiento al Socialismo, the political party led by ousted president Evo Morales must be allowed to continue to be a voice of the people and to continue to carry on their successful policies. The progress that the Evo Morales government made on behalf of indigenous people and on behalf of the majority of the people of Bolivia, is now threatened. Under the Morales government poverty was reduced by over 40%, unemployment was cut in half, anti-racism legislation was passed, and indigenous people played prominent roles in government and the military. The current regime seems to be turning away from the successful policies of the Morales government and reversing efforts to focus the economy towards increasing the prosperity of the Bolivian people rather than padding the pockets of the wealthy elite and generating profits for multinational corporations.

With Bolivia having at least one quarter of the worlds lithium deposits it is impossible to believe that multinational corporations will not seek to exploit the ouster of the Morales government. Indeed, Morales was ousted just days after cancelling an agreement with ACI, a German company contracted to build a plant to produce lithium compounds. That deal was cancelled due in part to disputes about royalties. We can not go back to colonial era practices that allowed corporations to plunder the natural resources of the Americas with no regard to fair compensation for the people and with no consideration for ecologically sustainable practices.

We further call on Greens throughout the world to stand in solidarity with the efforts of indigenous groups to throw off the vestiges of colonialism, to seek self-determination, and to build more egalitarian governments and civil structures. Just as Greens seek sustainable ecological practices our four pillars also encompass peace, social justice, and democracy.