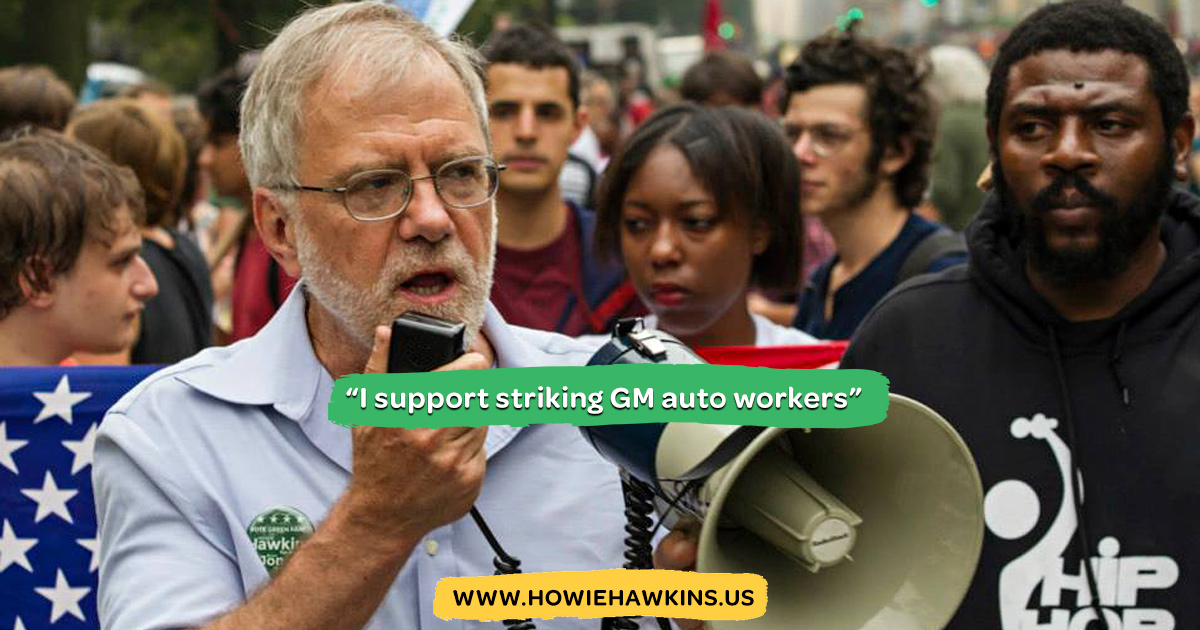 US auto workers have shut down General Motors. I support the strike of 48,000 General Motors workers who walked out at midnight Sunday evening. The shutdown of 35 manufacturing facilities in Michigan, Ohio, Indiana, Kentucky, Missouri, Tennessee, Kansas, Texas and New York will cost GM as much as $400 million in lost production each day.

GM is demanding big concessions: more worker payments for health care, a raise below the rate of inflation, and no change to the union- and solidarity-destroying system of tiers that allows the company to hire second-class workers as lower-paid temps with no contract rights.

Unfortunately, the union leadership has not prepared the workers with a winning strike strategy. The members were not surveyed, educated with bargaining bulletins, or organized into contract and strike action committees. The public was not educated and allies not mobilized. Six union officers have been recently convicted or charged with graft. The homes of union president Gary Jones and former President Dennis Williams were both searched by the FBI last month. They may be next to be charged.

The workers will have to rely on themselves to win a good contract. They need to be willing to vote the contact down if it still contains big concessions. That can be done, as the Chrysler workers showed in 2015 when they voted down the first offer and got a better contract in the end.

Workers are confronting General Motors, one of the symbols of the power of US capitalism, with a market capitalization of $55 billion. GM posted a profit of $11.8 billion last year and spent more than $10 billion on stock buybacks since 2015. GM’s CEO, Mary Barra’s annual salary is $21.87 million. She makes in one day twice what a new auto worker earns in a year.

Over the last four decades GM, Ford and Chrysler have slashed 600,000 auto jobs. There are only 158,000 jobs left. The pay of a newly hired auto worker has fallen by half. Workers are demanding higher wages, the reopening of idled plants, adding jobs at other plants and closing the difference between pay rates for new hires and veteran workers.

The auto workers strike is the latest in a wave of work stoppages. After years of declining power and stagnant wages, workers in the United States are standing up for their rights, and striking. A Bureau of Labor Statistics report shows the number of striking workers is the highest since 1986. In 2018, 485,000 people went on strike, a number not exceeded since the 533,000 people in 1986, and 2019 was going to be even larger before this strike. Workers should be mobilizing, as the Economic Policy Institute found workers have had stagnant wages for three and a half decades even though productivity is increasing along with corporate profits. A Gallup poll in late August found that 64 percent of Americans approve of unions, up from below 50 percent a decade ago.

In my Labor Day message, I urged harnessing the energy of working people to build political power for a transformation agenda for working people who have not gotten a real raise in decades. It is time to correct the decades of diminishing worker rights and shrinking unions as well as low-pay. The United States is about to begin a transformation to a clean, sustainable energy future. An ecosocialist Green New Deal is needed to revive manufacturing and put autoworkers back to work with good wages and benefits.

On July 30, I participated in a demonstration before the Democratic Primary Debates in Detroit of climate and union activists with the theme of “Make Detroit the Engine of the Green New Deal.” At that demonstration were members of the Autoworker Caravan who I had supported and worked with during the aftermath of the Great Recession. Autoworkers Caravan is a UAW caucus devoted to improving the conditions of autoworkers through labor solidarity and public investment in a new green economy. The Autoworker Caravan organized in the wake of the Great Recession to lobby Congress during the 2008 – 2009 auto-bailout proceedings. The workers carvanned to Washington in cars while the auto executives flew in their private jets.

The caravan opposed 2009 labor contract concessions forced upon General Motors and Chrysler workers as an Obama administration condition for the $81 billion auto bailout. GM got $51 billion from the federal Treasury in stock purchases, which came a loss of $11.3 billion when the feds sold their shares in 2013. As Autoworkers Caravan and Green Party member Wendy Thompson explained at the time of the pending bailout, the caravan called for large-scale public investments to convert and expand the auto plants into green technology, including electric cars, electrified light-rail mass transit, and wind and solar power equipment.

Meanwhile, we need to respect UAW picket lines and support autoworkers in our communities who are now trying to survive on $250 a week in strike pay.