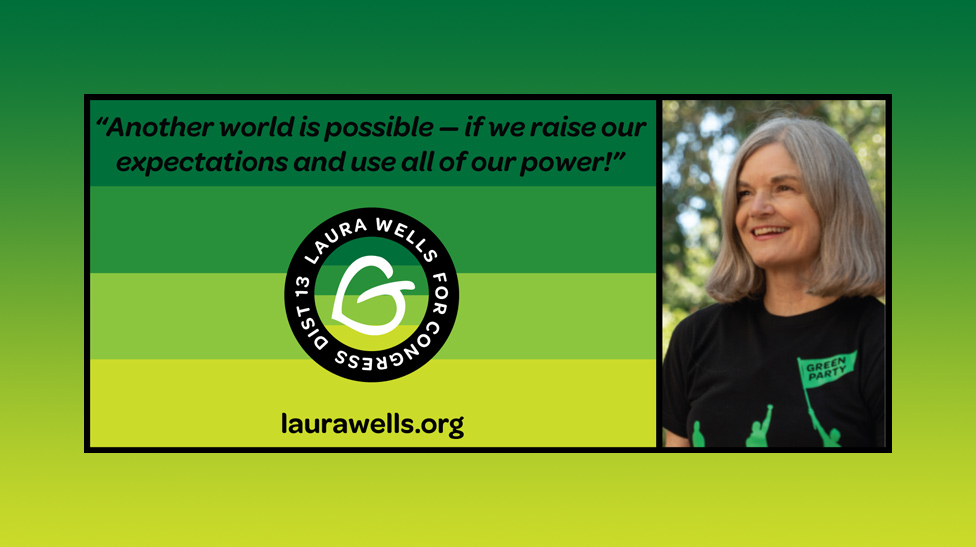 This campaign for Congress was challenging in more ways than one!

To begin with, this campaign was not on my list of New Year's Resolutions! When we realized, however, that Barbara Lee would be unopposed on the primary ballot, we saw an opportunity. If we won in a write-in campaign in June, a Green would appear on the ballot in November — a one-on-one contest between a no-corporate-money Green and an incumbent Democrat.

We did win the write-in, and I was proud to be one of three Green congressional candidates who advanced to the November ballot — for the first time in partisan races since the 2012 implementation of the independent-party-killing Top Two primary in California! In addition to my candidacy, two other Greens ran for Congress, Kenneth Mejia in District 34, and Rodolfo Cortes Barragan in District 40, both in Los Angeles County.

How did we do?

Better than the predictions, and better than recent congressional contests! I received 34,237 votes for a total of 11.6% (beating a 9.7% prediction); Kenneth earned 27.4%; and Rodolfo came in with 22.6%. It was great to see many other strong Green candidates across the country, now, when there is a crucial need for a strong opposition.

Also challenging in my District 13 race is that Congresswoman Lee is an icon — she was the lone vote against war after 9/11. That one courageous vote made it a challenge to run on all of the issues. The "icon" aspect added to what a friend called the "Invisibility of Incumbency."

Fortunately we had an opportunity to address important issues when I appeared side by side with Congressperson Lee at a candidate forum sponsored by the League of Women Voters. Though not the debate we called for, this 30-minute forum allowed us to point out differences between the Green Party, which never takes corporate money, and the Democratic Party which certainly does take billionaire and corporate money.

The system challenged us and we challenged the system right back. Receiving more than 34,000 votes in District 13 leads me to hope that our message got across: we need to RAISE OUR EXPECTATIONS and VOTE TO PRESSURE Congress. There is no excuse for our not having better housing, healthcare, education, ecology, peace, justice and meaningful work, in the wealthiest country the world has ever known. Yes, we can have what we want and need, when we apply strong pressure!

One of the big surprises during this campaign happened two weeks before the election: APPENDICITIS! I had an emergency appendectomy two days before I was to travel to Los Angeles for the "Summit for Independent Politics" which featured Jill Stein, the Green Congressional candidates, and activists from Southern California. I was very disappointed that I couldn't make that trip.

After three days, however, I was recovered enough to speak in Berkeley at the "Green Power Rally" with Jill and local Green candidates. I am usually somewhat understated in my critiques of the political scene, but a friend described this particular talk as "fiery!" My usual restraint might have been loosened because of the recent surgery, and because of Bernie Sanders' coming to town the day before to support Barbara Lee, who, in the summer of 2016, had cast her super-delegate vote for Hillary, not Bernie, even though Bernie was favored by the majority of her constituents! Here is the link to my October 28 talk. Tell me what you think! Too harsh? Too understated?

Only the amazing support we received empowered us to sustain the campaign!

It was a delightful surprise that financial contributions kept coming in throughout the campaign, even though we only did a strong fundraising push early on when we tried to see if we could pay the outrageous flat fee of $12,853 to Alameda County for a ballot statement (which used to be free). None of the three Green Congressional candidates could justify allocating that cost from our grassroots budgets. We found other effective ways to use the financial contributions.

All in all, I believe we made a difference.

We beat the predictions and got across our message to raise our expectations, and use our voting power to pressure Congress. We are currently exploring the best ways to continue to pressure for positive change.

Another world is possible — if we raise our expectations and use all of our power!
Laura