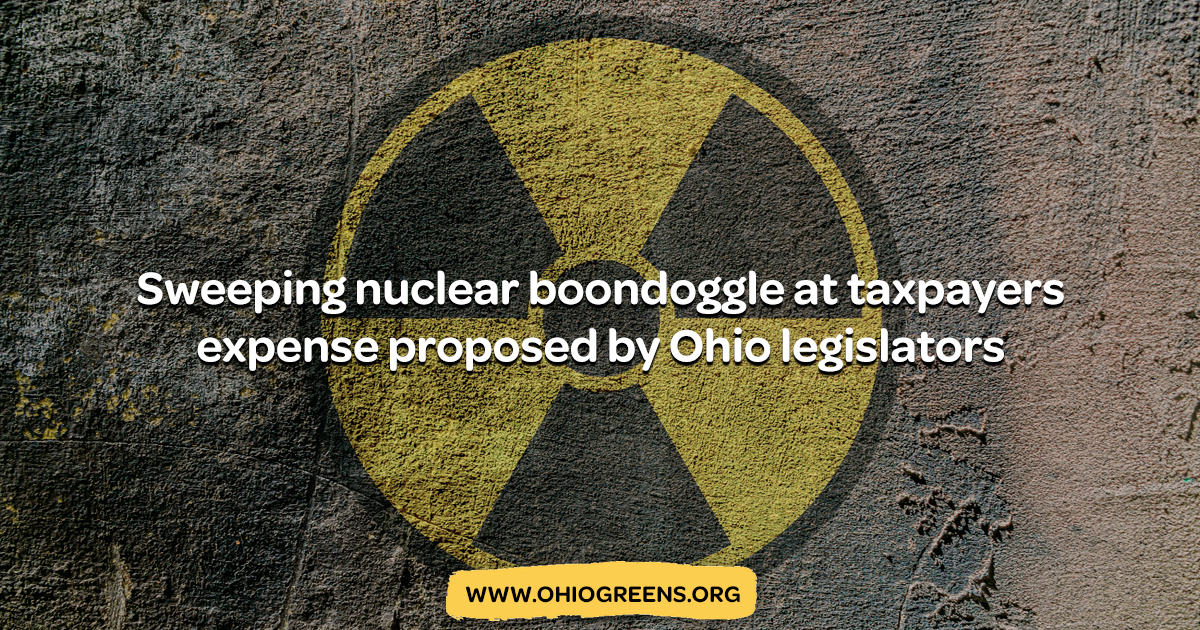 COLUMBUS, OH – The Green Party of Ohio opposes HB434 and supports the right of communities to know what is in their neighborhood and have a say in decisions that affect their health, safety and quality of life.

The Ohio House has passed a bill that threatens to surpass HB6 in its impact on Ohio citizens, and it won’t be confined to First Energy ratepayers.

This time we all get to pay for a dubious experiment to develop small nuclear reactors (SMRs) which are euphemistically called Advanced Nuclear Reactors by the proponents and by one corporation, eGeneration. It is a bill that gives the open wallet of Ohio taxpayers to perform research and develop SMRs (molten salt reactors) and they don’t have to actually produce anything. Have the citizens of Ohio been informed of this bill? Not that anyone has noticed.

Bill promoters have given no hint, and the public would likely not be able to find out: how much public money would be spent; who is being paid; what work is being done; where radioactive materials are being shipped; or much at all.

The Green Party's platform calls for procedural justice, ensuring the public's right to know and ensuring rules and regulations are transparent to help communities employ their rights and participate in decision- making. "Achieving procedural justice is a basic requirement for democratic government," said Phliena Farley, Ohio Co-Chair. "The U.S. Supreme Court has ruled that citizens have a right to challenge regulatory decisions in court, but that right is being gutted with legislation like HB434."

Residents living near any ONDA facility handling radioactive materials would have no recourse if an accident or spill harmed or contaminated themselves or their property. None of us would even know if we lived next to an ONDA nuclear facility.

Toledo Attorney Terry Lodge says, “Ohio law allows ONDA to be far more restrictive of its information and records than the federal Freedom of Information Act which governs the U.S. Nuclear Regulatory Commission, Department of Energy and Department of Defense.”

The ONDA doesn’t have to show any useful results. Secrecy does not belong in a free society.