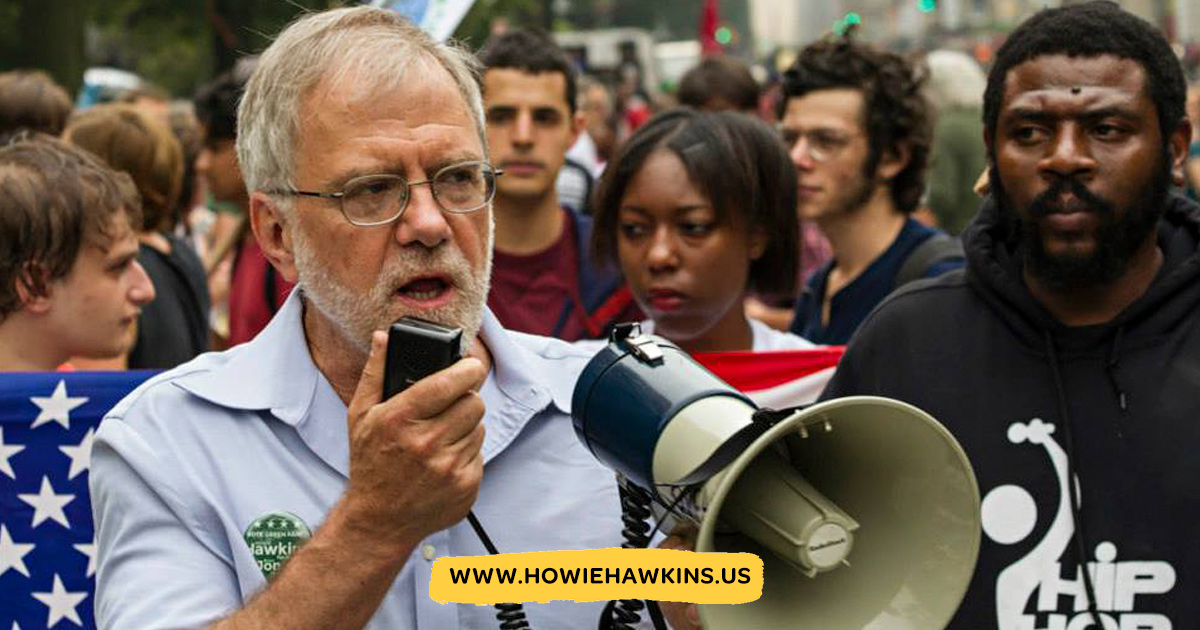 One area where the two parties of the millionaires and billionaires put in place policies that favor the rich are tax laws. Tax policy has favored the wealthy under both parties, but the Trump-administration has brought this tax corruption to new levels. We need to transform tax policy to build the working class base of the economy, shrink the wealth divide, and confront the climate crisis. An honest analysis of the tax code calls out in stark detail the extreme injustice of the economy in the United States.

On December 19, 2017, the Trump Tax Bill passed Congress. It was a gift for big business and the wealthy. It cut tax rates for corporations to 21 percent from 35 percent. It created a new 20 percent deduction for pass-through businesses that is favorable to commercial real estate companies like the Trumps’. It lowered individual tax rates for the wealthy in the top bracket to 37 percent from 39.6. It also helped the super rich by exempting larger inheritances from the estate tax, doubling the thresholds to $11 million for individuals and $22 million for married couples.

The benefits of the Trump law go to the most wealthy people in the United States. The Tax Policy Center reportedthat the top 0.1 percent would receive an average tax benefit of $193,380 in 2018. And over half of the bill’s total benefits would go to the top 10 percent of earners. The Joint Committee on Taxation, the official congressional scorekeeper, estimates that by 2027, every income group making less than $75,000 would see a net tax increase. JPMorgan Chase, the biggest bank in the country, bragged to its investors that the Trump tax cuts increased its bottom line by $3.7 billion. People know the Trump Tax was for the rich and not them, nearly two-thirds favor its outright repeal.

The Trump tax bill is the opposite direction the country needs to go at a time of record wealth divides when three people have the wealth of half the population. The Trump tax law made inequality worse as it resulted in a record amount being spent to buy back stock — more than $1 trillion — artificially raising stock prices and increasing top management pay and investment earnings.

TAX CUTS FOR THE RICH HURT THE ECONOMY FOR WORKING PEOPLE

The Trump tax bill has once again demonstrated the failure of supply-side tax cuts for the rich to trickle down to the rest of us as expanded production, more jobs, and higher wages. This trickle-down theory in practice just makes the rich richer. Given capitalism’s endemic tendency to overproduction, more money for the rich is not invested in the real economy of production but in financial maneuvers like stock buy-backs, which simply rearrange and concentrate who owns the real productive assets of the economy. It would be more productive and efficient to tax the rich and invest that money through the public sector in needed programs, like improved Medicare for All, and needed infrastructure and production, like mass transit and clean energy systems.

The income gap between the rich and everyone else has been growing markedly, by every major statistical measure, for more than 40 years. As of 2017, the richest 0.1 percent take in 188 times as much income as the bottom 90 percent. Between 1979 and 2007, paycheck income for those in the richest 1 percent and 0.1 percent exploded. Meanwhile, the bottom 90 percent of earners have seen little change in their average income, with just a 22 percent increase from 1979 to 2017. An estimated 43.5 percent of the U.S. population, 140 million people, are either poor or low-income, according the the U.S. Bureau of Labor Statistics’ Supplemental Poverty Measure, which is a far more realistic measure of actual living costs compared to the old Official Poverty Line, which simply multiplies the minimum food diet by three.

As bad as income inequality is, wealth inequality is even more pronounced. The wealthiest 5 percent own two-thirds of the nation’s wealth: the top 10 percent owns nearly 80 percent of the nation’s wealth. Over the past three decades, the most affluent U.S. families have added dramatically to their net worth, while those on the bottom have dipped into “negative wealth,” i.e., their debts exceed the value of their assets.

When looked at through a racial lens, the situation is even worse. The median black family, with just over $3,500 net wealth, owns just 2 percent of the net wealth of the median white family at nearly $147,000. The proportion of black families with zero or negative wealth rose by 8.5 percent to 37 percent between 1983 and 2016. The median white family has 41 times more wealth than the median black family and 22 times more wealth than the median Latino family. The U.S. poverty rate for white men is 7.0 percent, while it is 21.4 percent for black women, 18.7 percent for Latinas, and 22.8 percent for Native American women. The low wealth and high poverty in communities of color are not only due to current policy, but the enduring impacts of slavery and racial discrimination and exclusion in the United States since its founding. Major investments and empowerment of communities of color are essential to create economic and racial justice.

THE TAX SYSTEM SHOULD REDUCE INEQUALITY

We need a tax plan that takes the opposite approach of the Trump tax plan, and the Obama-era tax plan that preceded it. A February 2019 poll, found that 76 percent of registered voters want the wealthiest Americans to pay more. Rather than failing to build the economy by reducing taxes on the wealthy, we need to actually build the economy by creating a strong foundation of purchasing power in the working class by ending poverty and economic insecurity.

First, we need to end the regressive payroll tax by lifting the $128,400 cap on Social Security taxes. Currently, undocumented immigrants contribute billions of dollars in federal taxes each year, and their income taxes and payroll tax dollars are keeping Social Security and Medicare solvent, showing the hypocrisy and dishonesty of the immigration debate in the U.S. Lifting the cap on taxes for the wealthy would put Social Security on such a firm financial footing that would be a major contribution to doubling Social Security payments in order to address the retirement security crisis.

Second, put in place more a progressive income tax, especially on the wealthiest. In Capital in the Twenty-First Century, Thomas Piketty for the United States a top marginal income tax rates of 80 percent on income above $500,000 and 50 or 60 percent on income above about $200,000 in order to combat inequality and fully fund and revitalize the public sector. In fact, throughout the 1950s until 1962 the top marginal tax rate was over 90 percent and remained over 70 percent until 1980. This was a period of shared prosperity where wages kept pace with increases in productivity. The high top marginal rates incentivized top management to reinvest earnings in their companies instead of bleeding them dry with excessive executive compensation, as we have seen over the last 40 years as US manufacturing has declined.

Third, institute a wealth tax, Emmanuel Saez and Gabriel Zucman of the University of California, Berkeley, proposed taxing wealth in excess of $50 million at 2 percent per year and wealth above $1 billion at an additional 1 percent tax. This would affect only seventy-five thousand households and would raise some $2.8 trillion over a decade.

Fourth, increase the inheritance tax, reversing the trend of reducing such taxes. Senator Bernie Sanders has proposed a top rate of 77 percent on estates worth more than $1 billion, and rates of at least 45 percent on estates valued above $3.5 million. This would raise up to $315 billion over a decade and only impact the wealthiest, not the ability of people to pass down home to their children or small businesses or family farms.

Fifth, tax wealth at the same rates we tax work. Capital gains — profits from the sale of stocks, bonds, and other assets — are taxed at much lower rates than income from work is taxed. The current top federal rate for this tax is 20 percent, compared with the top income tax rate of 37 percent. This reform would impact the very wealthy. For households making over $10 million, capital gains account for 46.4 percent of income. For households making less than $100,000, capital gains account for a tiny 0.7 percent of the income.

More progressive and ecological taxation is essential to fund the ecosocialist Green New Deal for climate and economic security. The goals are to transition to 100 percent Green Energy by 2030 while ending the economic insecurity of the economy with an Economic Bill of Rights that guarantees to all living-wage jobs, an income above poverty, decent housing, comprehensive health care, and lifelong public education from pre-K through college.

The Green New Deal can close racial income and wealth gaps by empowering racially-oppressed communities through community control of Green New Deal programs so these communities are no longer be subject to discrimination and exploitation by outside employers, landlords, real estate agents, and other gatekeepers. In addition, HR 40 for a Commission to Study and Develop Reparation Proposals for African-Americans should be enacted to find the best way to make African-Americans whole in terms of individual and collective wealth for hundreds of years of unpaid and underpaid labor.

In addition to a more progressive tax system, we need to get our spending priorities straight. The U.S. military budget is greater than those of the next 10 largest military powers combined and eight of them are US allies. The military budget takes more than 60 percent of federal discretionary spending totaling $989 billion annually. $21 trillion of Pentagon financial transactions between 1998 and 2015 cannot be traced, documented, or explained.

The U.S. can cut its military budget by 75 percent and still spend more on the military than any other nation. We can invest the resulting peace dividend in a Global Green New Deal to meet basic needs like clean water and preventive health care around the world as well as help developing countries leap over the fossil fuel age into the solar age. By acting as the world’s humanitarian superpower instead of its global military occupation force we can make friends instead of enemies. A Global Green New Deal will build a sustainable peace where the world’s nations work cooperatively to solve our common problems of the climate and poverty.

Amazon, run by Jeff Bezos, the world’s richest man, paid no federal taxes on profits on $11.2 billion in profits in 2018. In comparison, undocumented people contribute some $11 billion in taxes every year. The third richest man in the world, Warren Buffett, admits he pays a lower tax rate than his secretary. These are two examples of many that demonstrate that transformation of the US tax system is urgently needed.