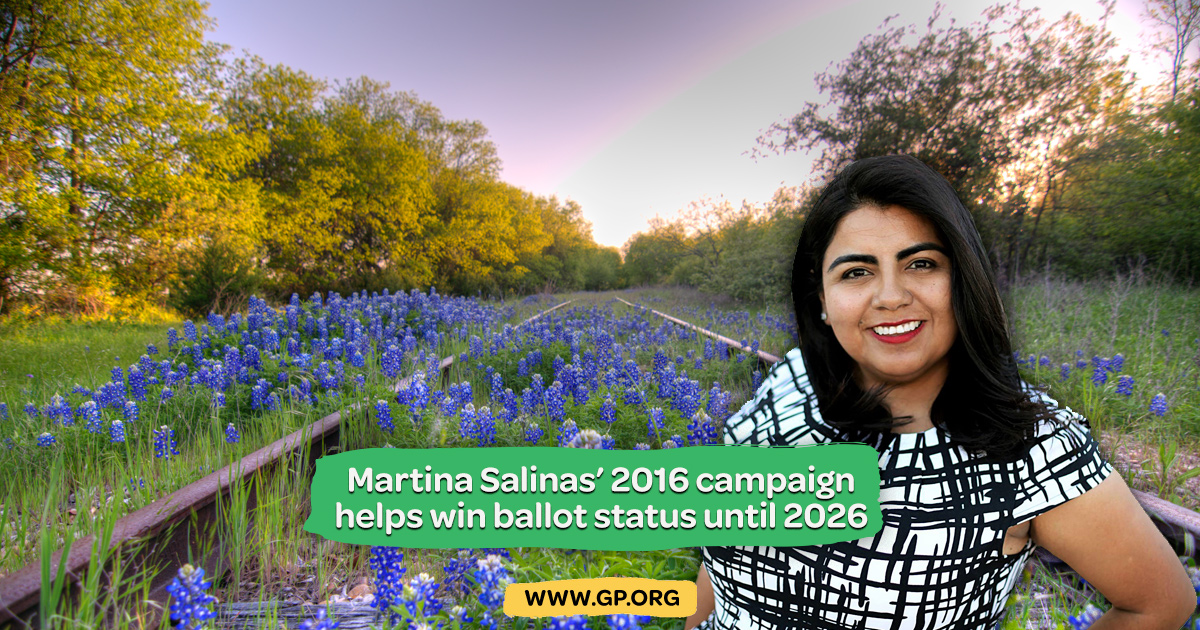 On Monday, Texas Gov. Abbott signed HB2504 into law. The new law makes it easier for political parties to retain ballot access, which reduces the vote test from 5% to 2% of any statewide race in any of the last five elections.

In 2016, GPTX candidate for Railroad Commission, Martina Salinas won over 287,000 votes. Because of Salinas’ strong campaign, Green Party of Texas will now be guaranteed ballot access through 2026!

Will you donate $20.26 to help us bring the fight for ballot access to other states?

How important is this win? Texas ballot access requirements are among the most difficult in the entire nation. If HB2504 had not passed, GPTX would have had to collect well over 100,000 signatures to meet a record-setting 83,000 signature petition threshold! No independent political party has been able to collect this many ballot access petition signatures to date. This would have cost Greens hundreds of thousands of dollars to have any hopes of attaining ballot access!

Such enormous obstacles to voters are yet another egregious example of the overwhelming effect of big money on not only elections and policy but on our fundamental political choices.

Imagine if in 2020 Greens were not on the ballot in Texas, the second most populous state in the country. This would be a major blow to our nationwide ballot line, and would have a devastating effect on our ability to build upon our successes in recent years. Losing ballot access in key states in 2020 would also provide corporate media outlets a devastating weapon towards diminishing the legitimacy of the Green Party. This would allow Wall Street media sources and major parties to take the focus away from all of our critically important policies that are already transforming the political landscape, whether it be our Green New Deal or our push to cancel student debt and end dangerous militarism.

This is why the most important accomplishment that Greens and supporters can achieve this year is to ensure that we have funding and organizers to achieve ballot access for all 50 states and the District of Columbia.

While Greens everywhere should celebrate the wonderful news from Texas, we must not forget that we still face very difficult early ballot access hurdles in several states. One significant example is in Arizona. After facing a challenging mid-term year, the Arizona Green Party was unable to retain ballot access for 2020. Arizona Greens have a very high petition threshold of 31,000 signatures to regain ballot access - another record requirement - by a very early November 2019 deadline. Arizona Greens estimate it could cost as much as $100,000 to collect their goal of 50,000 or more signatures to survive a legal challenge. If this weren’t difficult enough, petitioners regularly face temperatures of over 110 degrees during the petitioning window.

Greens also face tough ballot access hurdles in Ohio, Indiana, Illinois, Georgia, South Dakota, Alaska, Oklahoma and more. We will be regularly featuring on-the-ground report backs from several of these states and from volunteers who are donating tens of thousands of hours hitting the pavement and large events gathering signatures.

Donate to our national Ballot Access Committee fund today! Our future success depends upon building our party and giving voters real choices in every state.