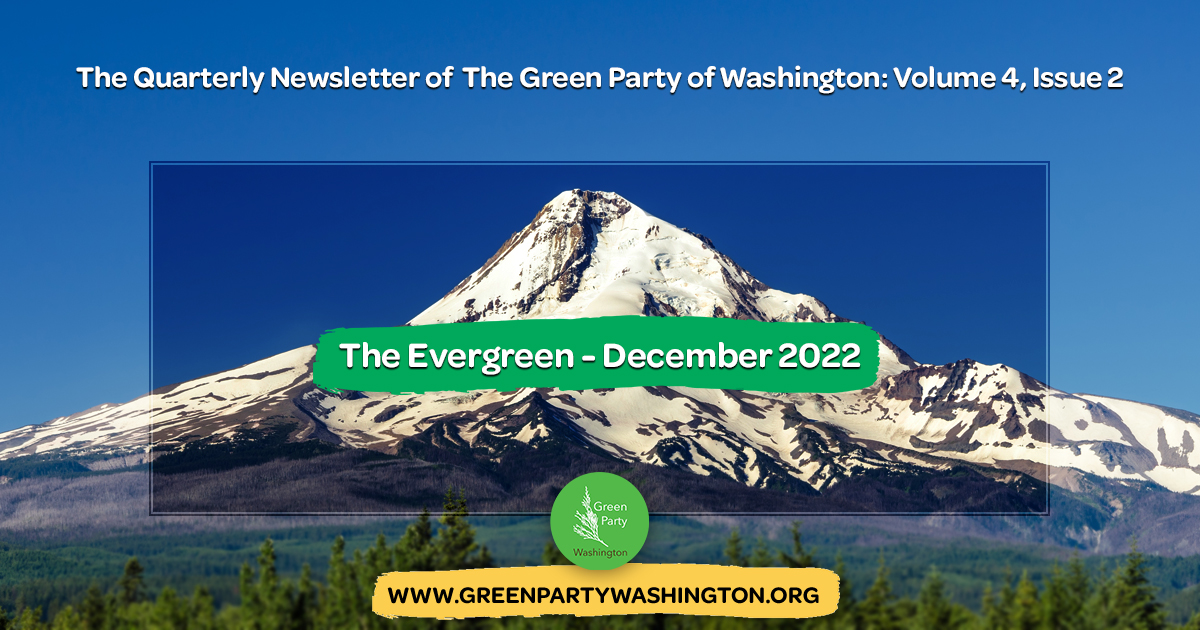 Welcome to your Green Party of Washington State quarterly newsletter. If you have information to submit for the Newsletter, please send it to [email protected].

Enter The Box by Matthew Villata

The electorate simply cannot think outside the box, even though they do have the ability. This is because the box has been insidiously designed to appear inescapable, to appear immutable and to appear institutional. The box is first past the post voting. The box is gerrymandering and other forms of voter suppression. The box is a media complex designed to stoke fear and apathy.

As a result, the democratic process inside the box resembles less a healthy electorate and more a game of football where two teams work to score points against the other in a constant contest. This does not have to be so; all sides of the box can be challenged. 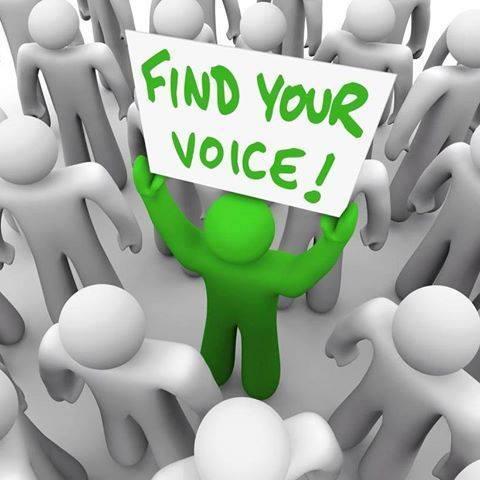 This is my first year as a member of the Green Party. I am excited to work towards environmental and electoral reform in Washington State and beyond. I write today because I need the help of anyone and everyone who reads. Recently, Washington State held primary elections for a plethora of positions. I was disappointed to find a lack of green and third-party candidates for the Washington State House. That is not to say that there were not any, but there were far from enough.

That is the question I need help answering; why is this the case? The times we find ourselves in are turbulent, but there is an opportunity to seize. There are Greens across Washington State who are ready and willing to challenge the big two-party structure. Where are they during the primary and how can the Green Party of Washington State better equip these individuals? State House elections are smaller than national contests and are less awash in endless swarms of donor dollars.

They are prime targets to insert Green hopefuls into. 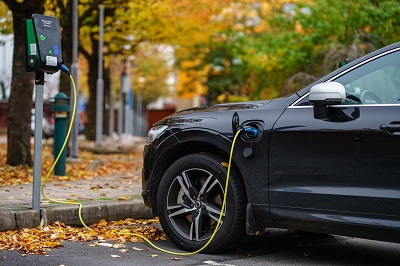 I have a feeling that most people are like me when they consider buying a new electric car. They really want to do their part in removing fossil fuel and its multiple harmful pollutants from the atmosphere but running a battery dead is a bit different than running out of gas.

The reason of course is because charging stations in many parts of the country are still far and few between. Another big reason is because many people use their cars for vacation traveling and long weekends. On the vacation issue, electric car manufacturers and dealers could easily solve this problem. 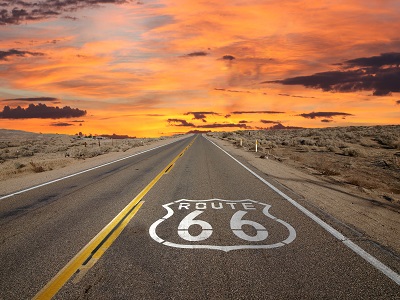 Japan’s high-speed rail system with its bullet trains has been the envy of Amtrak for many years. And for years Amtrak has been lobbying Congress here in the United States to fund high-speed rail. Bullet trains run on electrified magnetic rails that are environmentally clean and efficient. In Japan most of this electricity is produced by nuclear power plants with the hopes that someday an even cleaner more sustainable source of energy will become available.

Imagine what it would be like if we here in the US could travel at hundreds of miles an hour as we watched the countryside pass by, having no concern about how much pollution our car or the jet was belching out along the way. What would it take here in the US to make that happen? While you consider that, I’m going to change subjects here for a bit. 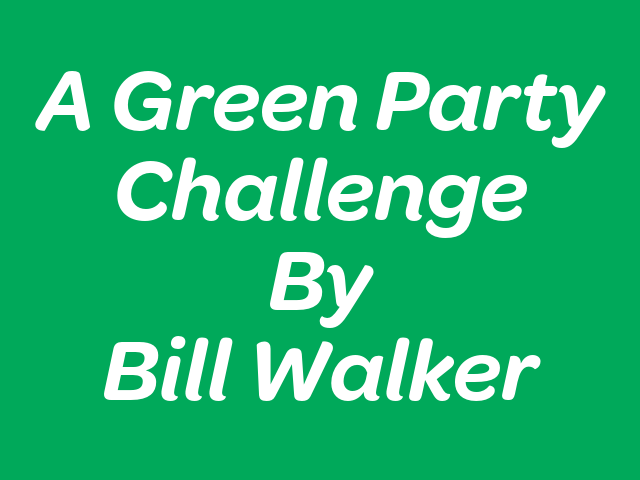 It’s almost time for Christmas and a perfect time to clean up your computer email folders for the New Year. Here is how it works. You go to each and every email address that you have. And for each email message that you delete you add one cent to your Green Party donation. You can donate to either your state or local chapter of the GP or the National Chapter or all of them.

Example: In my case, I have three primary email accounts.

Gmail account I deleted 175 emails in my trash folder, 4 in my spam folder, 306 in my updates folder, and 938 in my promotions folder.

I’m sending a check for $17.00 dollars to the Washington State chapter of the Green Party.

Effective January 1, 2022, if you have been convicted of a felony in Washington State, another state, or federal court, your right to vote in Washington State is restored if you are not currently serving a DOC sentence in total confinement. Going forward, voting rights are immediately restored upon release from prison, regardless of community supervision status. All you need to do is register to vote using one of the methods below.

To register to vote in Washington, you must be:

In 2022, ranked choice voting (RCV) appeared on the ballot in ten American jurisdictions and won in eight of them, including statewide in Nevada. Details of each 2022 ballot measure campaign can be found below.

Seattle’s RCV campaign was backed by some of the most prominent organizations in the city, winning endorsements from several state legislators, the League of Women Voters Seattle-King County, the King County Democrats, More Equitable Democracy Action, and the Faith Action Network, among others.

“Voters delivered a mandate for ranked-choice voting and sent a strong signal to the legislature that Washington voters want better elections.” – Kamau Chege, Executive Director of the Washington Community Alliance.

Seattle Will Vote on Creation of New ‘Social Housing’ Authority in 2023 by Justin Carder
September 1, 2022

From: The South Seattle Emerald

The backers of I-135 to create a new public developer “to build, acquire, own, and manage social housing” in Seattle say they have successfully gathered enough signatures to place the initiative on the ballot — but the vote won’t come until 2023.

“Voters across Seattle will now get the opportunity to vote for a new intervention to our affordable housing approach,” the House Our Neighbors! group said in a statement. “We are on the brink of establishing a public developer to create housing for folks who are in the 0-120% AMI bracket, where restorative justice measures must be implemented — no more punitive evictions.”

Backers say their proposed ballot initiative would establish a developer to create more rental housing options in the city, powered by public funding and protected from free-market influences and City and County restrictions.

Come meet other Greens and find out how you can promote the presence of Green Values in your community and your local government!

This chapter holds membership meetings on the third Wednesday of the month at 7:00 PM in Seattle and online. Find out more at GPSEA.org or check out their Facebook page for meeting details. All Greens, as well as friends and allies for sustainability, are welcome to attend.

This chapter is focused on initiative campaigns, solidarity efforts, mutual aid, and building left unity. Contact them for information on meetings and other activities and check out their website, Facebook page, and Facebook group for updates.

Green Party of the Mid-Columbia

Find them on Facebook by joining the discussion at Green Party Friends of the Mid-Columbia.

Green Party of the Olympic Peninsula

This chapter is currently inactive and is seeking new members and organizers. For more info, check out their Facebook group or email [email protected].

Interested in helping with Social Media or doing Graphic Design? Interested in volunteering as Deputy Treasurer or as an at-large member of our Coordinating Council? We need you! Please email to let us know!

GPUS has many committees that need volunteers. Members can find out more at gpus.org/committees. If you want to volunteer on a GPUS committee, just email us a short bio with your request to join the committee, and your request will be added to our next agenda.

LETTERS TO THE EDITOR

(Views expressed in Letters to the Editor do not necessarily reflect the views of the Green Party of Washington State. Please note that letters may be edited for content, grammar, and length. Letters should be signed by the person submitting the letter.)

No letters were received this time…

Don’t see your chapter represented? Give us a holler. We aim to have an elected representative from each chapter on the State Coordinating Council. We meet online at 7 PM on the 1st and 3rd Sunday of each month.

But wait! No, it’s not! There’s plenty of room for more!

Send in your pictures, stories, and ideas to Starlene at [email protected].

We hope to publish this newsletter every 3 months at the start of each new season. Send your Newsletter submissions to [email protected].