#PressforProgress: The Time is Now. 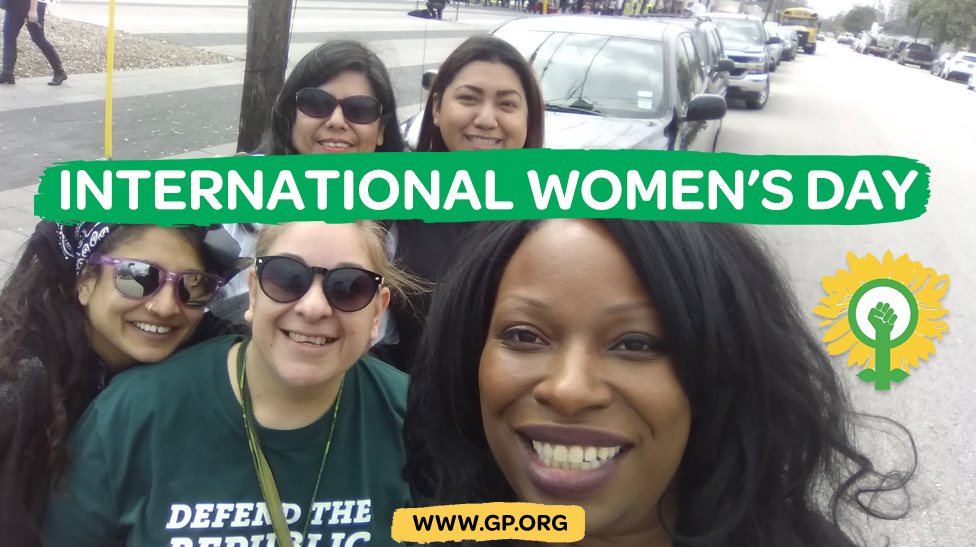 In this era of #MeToo and #TimesUp, International Women’s Day 2018 follows a movement that has arisen from the voices of people globally for the rights of women and equality and justice. The public is demanding change as an outcry against sexual harassment, violence, gender gap in wages, and discrimination against women. The time is now. #PressforProgress.

Green Women Rising (GWR), the Green Party Women’s Caucus in Utah, joins women world-wide in embracing the opportunity to be part of this movement that is rapidly empowering women in rural and urban settings to raise up their voices and take action for women’s rights and realize the potential of women.

“Green Women Rising believes that women’s rights are human rights, “ says Kimberly Bain, Co-Chair of GWR. “We promote the protection of the rights of all Utah Women, especially women of color, LGTBQIA+, women with disabilities and women of varying socioeconomic statuses. We exist to empower Utah women to stand up and speak up in a state where women do not have a powerful voice.”

Not only are Utah’s women still lagging behind men in wages for equivalent work, they are also underrepresented in Utah’s politics and often do not have an influential voice on issues that directly impact women in Utah, particularly in the areas of health and domestic violence.

The theme for this year’s International Women’s Day (IWD) is “Press for Progress”, launching a year-long campaign in an effort to collectively unify women world-wide towards action to elevate women’s rights. According to the IWD website, it began with the Suffragettes in the early 1900's, and the first International Women's Day was celebrated in 1911.

“We have been pressing for progress since the early 1900’s,” states Dee Taylor, GWR. “Now is the time to Press for Progress with unflinching resolve and determination.” Referring to statistics that one in three women in Utah experiences some type of violence, Taylor adds that “Violence against women of color and cultural diversity is widespread and often not reported. There is no registry for missing and murdered indigenous women, yet numerous accounts exist of these women missing or murdered.”

”Further,” Taylor adds, “climate change contributes to violence against women,” referring to accounts of women being at risk for rape, kidnapping and murder in certain areas of the world where water is difficult to access, requiring women to travel further to obtain it. “Violence against women in Utah is also often associated with camps at mining, drilling and excavation sites where men take advantage of women in nearby towns.”

The committee on Missing and Murdered Indigenous Women (MMIW), a campaign of the Utah Native and environmental rights organization PANDOS, is actively providing education on indigenous women in Utah who are missing or have been murdered, in an effort to get a registry created to track the incidents. The campaign is centered around the themes of #whoismissing , #mmiw and #nomore. Green Women Rising is an active member of the MMIW project.

Bain says that more education and involvement of women in the political process is needed to influence policies that affect women in all areas. “Women are the backbone of human life in Utah. We call for all women in Utah to raise their voices against oppression, violence and discrimination. We call for all Utah women to become involved in advocacy organizations to learn how to speak up and demand justice. We call for all Utah women to run for office and develop legislation that will provide the needed political actions to end disparities between women and men. #PressforProgress.”

GWR is actively working to strengthen the tradition of leadership by women in Utah as exemplified by women who have held and currently hold office. Inspired by the legacy of Utah women in leadership, such as Martha Hughes Cannon, the first woman in the United States to hold the office of State Senator in any State (1896), a suffragette, physician and staunch advocate for women’s rights, women can and will rise up to Press for Progress.