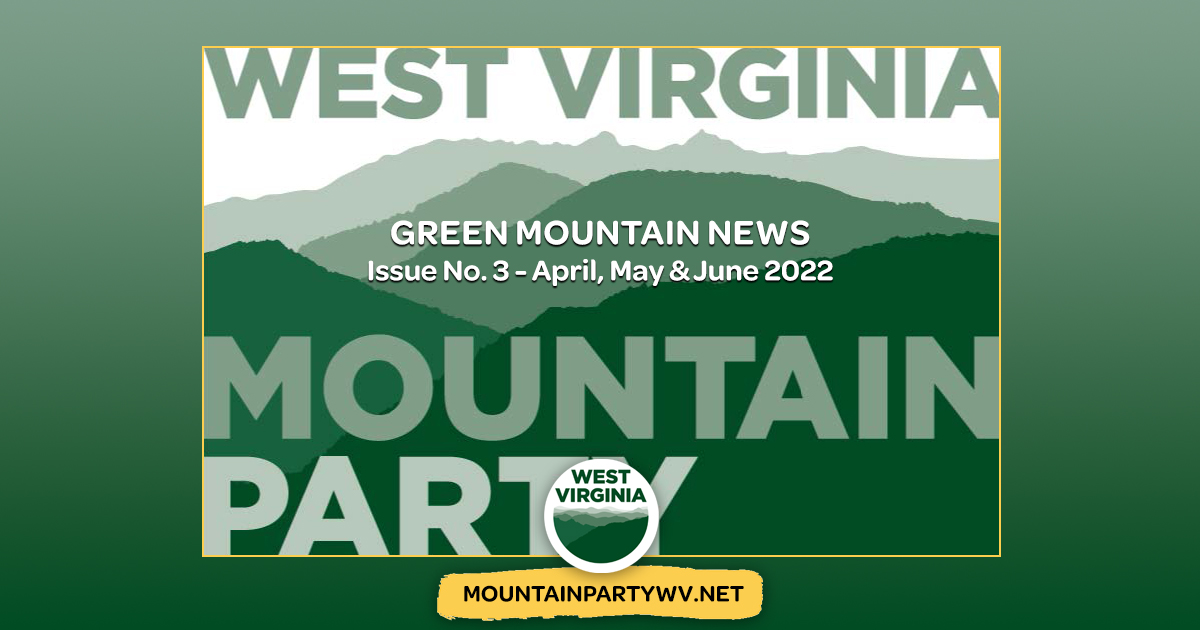 CHARLESTON, WV — May 31, 2022:  Mountain Party membership continues to grow according to the West Virginia Secretary of State.

Despite a series of voter purges and the state’s population in decline over the past several years, Mountain Party membership totals are up.

Five years ago, the Secretary of State in May of 2017 reported Mountain Party membership to be 1,883 constituting 0.15% of total registered voters.

In contrast, the Democratic Party has lost over 150,000 members during this five year period, with all other parties and no affiliation making gains.

This dramatic decline coincides with the Democrat’s worst electoral performance in the state’s history back in 2020, which will likely be compounded in the 2022 midterms.

Honkala Inspires At May 14 Biennial Convention

At the Mountain Party’s biennial convention in Morgantown, former 2012 Green Vice Presidential nominee Cheri Honkala made the case for alternatives outside the two-party system, with the Mountain (Green) Party being one of the leading alternatives.

Honkala described the need for more direct action oriented approaches to take on capitalism. She referenced the Black Panther’s survival programs such as the free breakfast program for children and free clinics. In addition, she highlighted the strategies utilized by the original Poor People’s Campaign.

The next scheduled Mountain Party convention will take place in 2024. 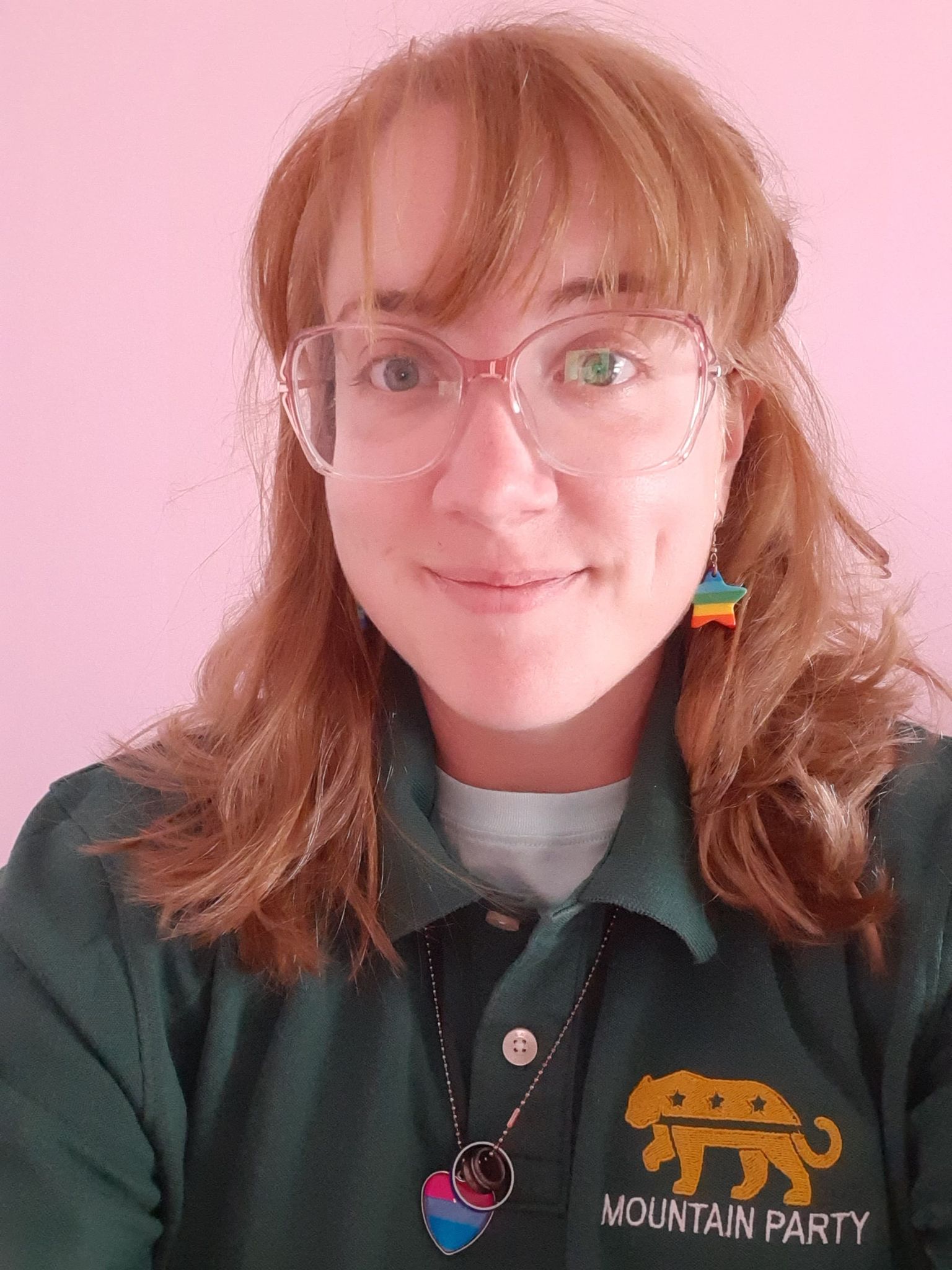 Mary Kinnie is the State Executive Committee (SEC) member for the 16th Senate District and a former candidate for the House of Delegates.

“I was born and raised in Berkeley County. I have also lived in McDowell County as well as the State of California. I am fortunate to have traveled abroad many times, and my home state of West Virginia is the most beautiful place I’ve ever been,” said Mary Kinnie, “I love to travel through our state and learn about our history.”

“Participating in the Mountain Party is one of the efforts to keep our unique state wild and wonderful for my kids and all of our future generations.”

Mary has owned several small businesses, with her current business thriving as a successful cottage bakery. She supports policies like the WV Cottage Law that allow more small businesses to exist.

“The Mountain Party stands for what I believed in before I knew there even was a political party with real people and real values. I have voted Mountain (Green) for a decade and hope to bring more folks together to take our state forward.”

In her spare time, Mary plays in a band and enjoys expressing herself through music and art.

How the Democrats Are Culpable in the Erosion of Abortion Rights

(May 9, 2022) With the Supreme Court due to overturn Roe v. Wade within the coming months, the left has been berated by liberals with the familiar talking point that in order to protect abortion rights we must “vote blue.” Predictably, liberals took to social media soon after the leaked draft opinion was reported, blaming Susan Sarandon and other third party voters for the upcoming Supreme Court decision, while completely ignoring the Democratic Party’s culpability in this travesty.

While the Republican Party is the most vocal anti-choice party, the Democrats are not blameless for this miscarriage of justice.

While the popular sentiment may be to “vote blue” to protect abortion rights, this runs afoul of history. In 1974, then-Senator Joe Biden stated in regards to Roe v. Wade, “I don’t like the Supreme Court decision on abortion. I think it went too far.” He went on to say, “I don’t think that a woman has the sole right to say what should happen to her body.” A few years later in 1982, Biden was one of only two Democratic lawmakers who supported a constitutional amendment that allowed states to overturn Roe v. Wade and pass their own laws on abortion. Just nine years later, Joe Biden would then be largely to blame for the confirmation of anti-abortion Justice Clarence Thomas.

Fast forward to 2015, when eventual Democratic nominee for president Hillary Clinton told MSNBC that her position on abortion was flexible and that she was willing to “compromise” with Republicans: “[If] there’s a way to structure some kind of constitutional restriction [on abortion] that takes into account the life of the mother and her health, then I’m open to that.” One year later, Clinton would select anti-abortion Tim Kaine to be her vice presidential nominee.

Following Clinton’s defeat, top Democrats were still not convinced of the necessity to promote bodily autonomy. In 2017, Nancy Pelosi asserted that Democrats fighting for abortion rights were “hurting the party” and that the party should be open to anti-choice candidates. Senator Bernie Sanders and DNC head Tom Perez echoed these sentiments, saying that the party should not “demand fealty” to the party’s ostensibly pro-choice positions. This flexibility on abortion policy is currently being put into practice, as Speaker Nancy Pelosi, Maryland Congressman Steny Hoyer, and South Carolina Congressman Jim Clyburn are all endorsing anti-choice Texas Congressman Henry Cuellar in his primary against pro-choice progressive Jessica Cisneros.

With this split between liberal and conservative Democrats being tolerated within the party, it is commonplace for the liberal Democrats to blame the more conservative Democrats such as Senators Joe Manchin and Kyrsten Sinema for the party’s failure to pass progressive legislation, including the codification of abortion rights — never mind the fact that even before the 50-50 Senate split, the Democrats still failed to codify abortion rights into federal law when they had an overwhelming majority during the first two years of the Obama presidency. President Obama, it should be noted, promised to sign the Freedom of Choice Act on day one of his presidency. Once in office, he reneged on his promise and stated that the bill was “not [his] highest legislative priority.”

For nearly half a century the Democrat establishment has continually utilized fear in an attempt to get people to the polls, telling us that a Republican government will almost certainly seek the reversal of Roe v. Wade. Weaponizing this fear has been prioritized over the actual codification of abortion rights, and now the reversal of Roe is occurring under a Democrat government.

The liberals of the Democratic Party have done nothing to stop the conservative elements in their party. “Progressive” lawmakers stayed silent during the 2018 primary election when Joe Manchin was challenged by progressive activist Paula Jean Swearengin, and Senator Elizabeth Warren even endorsed Manchin’s bid for re-election. Manchin went on to vote for two out of the three anti-abortion Supreme Court justices nominated by President Trump, and did so without any consequences from the Democratic Party. Since winning both chambers of Congress and the Presidency in 2020, the Democrats have done next to nothing to crack down on conservative Democrats and secure abortion rights at the federal level.

Democrats have had the option to expand the Supreme Court, end the filibuster, and to put hard pressure on Manchin and Sinema and other conservative elements in their party, but instead have chosen to sit back, throw up their hands, and declare that all is lost. Even in the immediate aftermath of the recent Supreme Court leak, President Biden stated that he is unwilling to end the filibuster in order to codify abortion rights. The weakness of the Democratic Party is just as much to blame for the gutting of reproductive rights as is the determination of the Republicans.

This is not just an issue at the federal level either. The West Virginia Democrats controlled the state for eight decades and did virtually nothing to protect abortion rights. The WVDP has even helped to strip away abortion rights; during a vote on the anti-abortion HB 4007 in January 2020, only five of 41 Democrats voted against the bill. In 2021, almost one-third of the Democrats in the House of Delegates voted for the anti-abortion HB 2982. In 2022, six House Democrats voted in favor of SB 468, which banned abortion based on a person’s “reason” for receiving the procedure — a bill that even three House Republicans voted against. Almost half of the Democrats present in the State Senate voted for HB 2982 and over half of them voted for SB 468 — but of course no Senate Democrats will ever face consequences for their anti-abortion votes since Senate Minority Leader Stephen Baldwin is virulently anti-choice, having even co-sponsored an anti-abortion resolution in the State Senate just this year.

When even the top leaders of the WVDP are anti-choice, and the leaders of the national Democrats openly express their approval of anti-abortion candidates, how can anyone seriously expect to win abortion rights legislation by “voting blue”?

Make no mistake: this is a small part of the larger class war. Abortion will always be legal for the rich and powerful capitalists; and so long as their system and their two parties are in charge, abortion rights will never be safe for the working class. In order to secure any fundamental human rights, it is imperative that the working class completely break from the Democratic and Republican parties.

The Green Party of the United States affirms the non-negotiable right for an individual to control their body, reserving the right to make their own decisions on their reproductive health. It is essential that access to birth control, family planning resources, and safe, legal abortion be available.

“With every drop of my blood I defy their law, and I despise them. I am appealing to you, to the common people; I care nothing about the Supreme Court, corporation lawyers every one of them. The Supreme Court is not the court of last resort; the people are.”

Visit our website at www.mountainpartywv.net and go to “Email Sign Up” which is listed in the top navigation menu, where you will be redirected to https://mailchi.mp/8870cb0a9702/mountain.

Any questions or request for assistance may be sent via email to [email protected].

Why The Mountain Party?

Read: The Case For An Independent Left Party In West Virginia