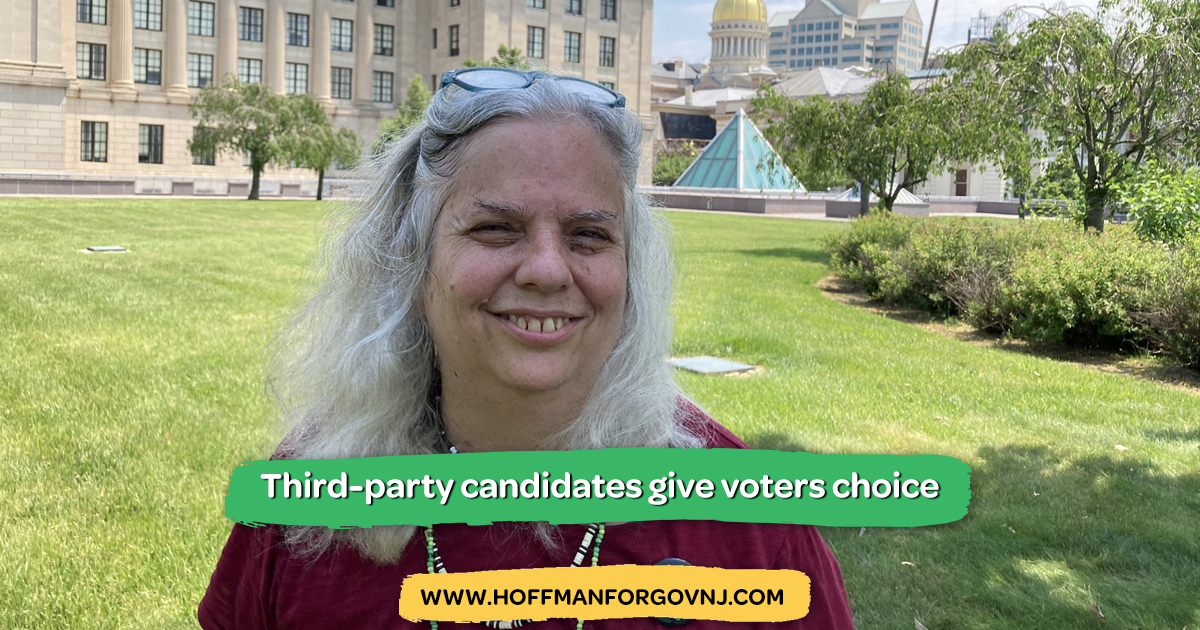 Voters in New Jersey have more candidates for governor to choose from than just Republican Jack Ciattarelli and Phil Murphy, the Democratic incumbent seeking a second term.

In addition to the Democrats and Republicans, three other parties are represented on the ballot in the race for governor. The candidates are Madelyn Hoffman, a longtime representative of the Green Party of New Jersey; Gregg Mele, a libertarian from Bridgewater, and Joanne Kuniansky, a leader of the Socialist Workers Party.

Hoffman is no stranger to New Jersey politics. Running as the Green Party's U.S. Senate candidate, Hoffman made several runs for state office in the 1990s. In 1996, she was Ralph Nader's vice-presidential running mate on the New Jersey ballot — the consumer advocate was paired with different women candidates in that slot in different states — and the pair got more than 32,000 votes. She previously ran for governor of New Jersey in 1997 and 2018.

Hoffman, 64, served as the executive director of New Jersey Peace Action from 2000 through May 2018. She has long been a peace activist and an environmental advocate and has worked for social justice causes.

Hoffman, who lives in Flanders and has a master's degree in public administration from Rutgers University, generally holds liberal positions on a host of issues. These include a single-payer health care system or Medicare for all, an end to fracking and the country's reliance on fossil fuels, abolition of the Immigration and Customs Enforcement agency; tuition-free college; a living wage that would range between $20 and $22 an hour in New Jersey; and "a shift in federal spending priorities from the military to programs that address community needs."

Additionally, she said, the Green Party advocates a change in balloting from one in which voters choose only one candidate to a ranked-choice voting system, in which voters list as many candidates as they want from most to least popular with secondary and subsequent choices counted until a candidate receives more than half the votes cast.

Mele is an attorney who has run in two previous elections, for the U.S. House of Representatives in 2018 and the mayor of his town of Bridgewater in 2019.

As a Libertarian, Mele has said he is concerned with keeping the government small and out of the private sector. True to his party, he advocates for the sanctity of individual freedom.

“We fight for individual freedom and personal responsibility, where personal (e.g., 2A, marijuana, etc.) and medical decisions (e.g., masks, vax, etc.) are left to the individual and, where relevant, their doctor and, if a minor, the parents, and no one else,” Mele said.

Mele is determined to trim the government for efficiency, as well as cut taxes so that New Jerseyans can keep more of what they earn, he said in a statement. “Privatizing more things will enable the more efficient market to maximize benefits, as every effort to intervene with the market by the government is a drag on market efficiency,” he said.

Also, Mele said he believes in reforming the public school system, the pension system, and Medicaid. He stated that big government leads to a deterioration of the economy and standard of living and he encourages voters to become more self-sufficient.

Kuniansky of West New York is a union activist who has worked in oil refineries and meat packing. She has previously run for office in three different states.

Throughout her career, she walked the Teamsters picket line at Hunts Point Produce Market in the Bronx and joined rallies supporting United Mineworkers currently on strike against Warrior Met Coal in Alabama. She is a longtime participant in the fight for women’s rights. Kuniansky defended Cuba’s socialist revolution. Currently, she is a Walmart deli worker in addition to her work for the Socialist Workers Party.

Kuniansky said in a statement that she believes that unions are the most important defense organizations of the working class and must take the initiative to lead workers to get vaccinated against COVID-19 and get back to work. She is also calling for a shorter work week with no cuts in pay to stop lay-offs, and cost-of-living clauses in labor contracts that raise pay and benefits to account for price increases.