This is no time to sit back and watch 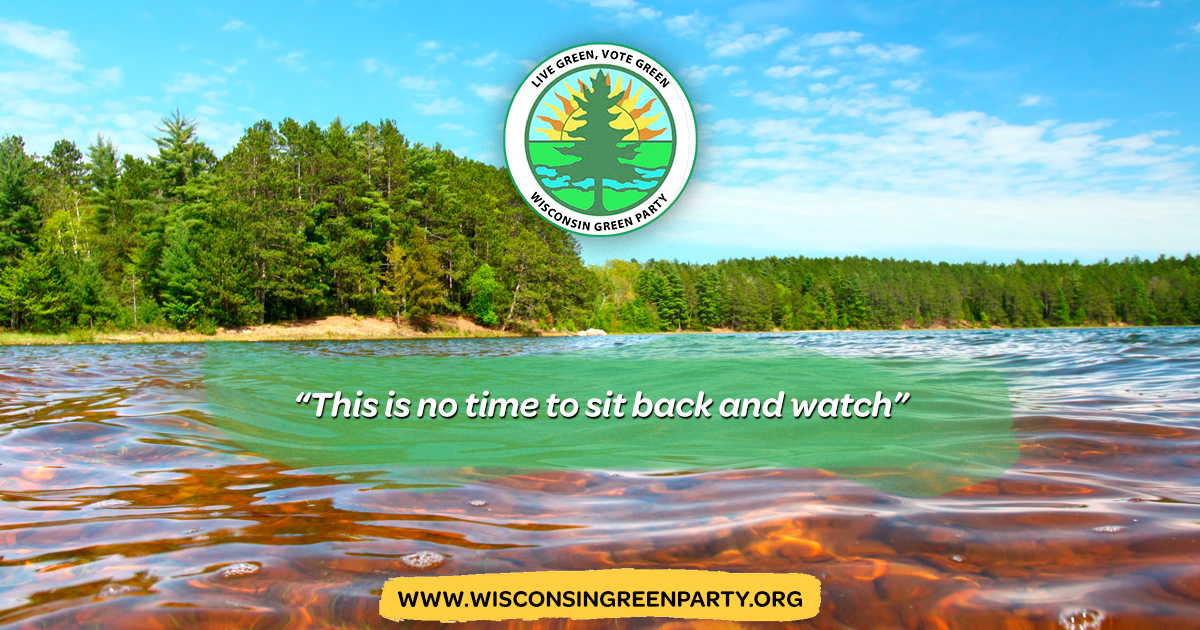 MADISON, Wi – As the Wisconsin Green Party (WIGP) gears up for a successful Fall and 2020 election cycle, we hope to see you out at our events and in the many exciting movements we are a part of. We have a lot of great opportunities for Greens to get involved including our fantastic commitiees which are always in need of writers, designers, communicators, tech savvy people, organizers and more. In addition, we will elect a new coordinating council at our Fall Gathering, and we would like to empower all Greens to think about nominating themselves or others to lead the charge as a secretary, treasurer, CD representative, at-large member, or even as a co-chair.

We are approaching another historic election cycle, and we think it is about time we replaced Wisconsin’s leaders who are failing to take the people’s call for action on global warming, universal healthcare, student debt relief, an end to our forever-wars abroad, cleaning up industrial poisons, legalization of cannabis, justice and equity for all people, and geting rid of corporate power in politics which drowns out the voice of the people. The more the mainstream media and the two-party establishment try to discredit us, the more the people demand Green solutions. A decade ago, Jill Stein and other Greens first ran on such policies and were regularly considered so crazy, they were not worth debating or worth covering in the news. Now, the Demo- cratic presidential candidates cannot escape (at the very least) the discussion of our ideas. The corporate news is failing to quiet the movement.

Yet, this is no time to sit back and watch. As our core group of activists grow further, we have the opportunity to help our candidates see success in 2020. We have the opportunity to spread the word of our movement to more Wisconsinites, and as we grow, so will our influence as we work to undo the disastrous environmental and social policies of the neoliberal era leading to such massive failures as Foxconn. If you would like to join the movement contact us through our website, social media, or through the address on the back of the newsletier. We are the people we have been waiting for, and there is no time to lose in creating a betier world for the human family and the larger ecological systems of which we are a part.

The Wisconsin Green Party has had a busy summer despite the vacation season. Dave Schwab, Dace Zeps, Mary Sanderson, and I attended the Annual National Meeting in Salem. Mary assisted with the “Greening The Dollar” workshop with her compatriots from the Budget and Finance Reform Commitiee. Dave led numerous workshops on media. All of the workshops were recorded and can be found on the US Green Party’s website. Dace Zeps was one of the organizers and coordinators of the ANM. She and the other commitiee members should be proud of the success- ful event they put on.

The Coordinating Council and its various commitiees continued to meet throughout the summer not only to continue many regular functions in the party, but also succeeded to add some new and helpful members to various commitiees, created a new dispute resolution commitiee which is in need of volunteers, and resolved on a few measures to improve our metings towards a greater adherence to our principle of feminism and equality. Green locals have also been tabling and door-knocking, especially to promote our environmental goals. Tom Rodman and Greg Banks in Milwaukee have been especially active on a door-knocking campaign in conservative districts to educate people on environmental issues facing Wisconsin. Our Madison local has been particularly active opposing the F-35 fighterjet expansion. The WIGP has maintained a presence in several issue coalitions across the state dealing these and other issues. Greens are on the front lines of coalitions which are moving towards a Green New Deal in Milwaukee County, peace activism against military intervention in Venezuela, and much more.

We have also seen many Green victories and positive movements around America and the rest of the world. Our comrades in Texas have won ballot access for the 2020 cycle. In June, Greens won 69 seats across Europe; 22 of them being German. Albuquerque, NM is moving forward on a ban on the harmful chemical, glyphosate, after a lot of participation in part by area Greens brought the environmental issue to the County Board of Commissioners. You can keep up with more Green news by subscribing to our social media, email, and by visiting our website.

Finally, I would like to take the time to recognize some extrarodinary Greens: Dace Zeps who served in many Green positions incuding as Co-chair, and most recently as corresponding secretary, will be moving to Michigan at the end of the year. Keith Brumley has served as Recording Secretary and on many local and state committees over the past few years. He recently had to move to Missouri. The Wisconsin Green Party thanks these extraordinary people for their service, and we wish them well as they inevitably bring their talents into their new activist communities. Go Green!