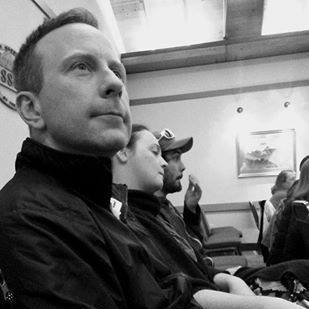 "I'm not a politician. I'm just a guy who cares about people, the planet, and peace."

Greetings brothers and sisters! I'm Thomas Breck and I'm running as the Green Party's candidate in the May 25th special election for Montana's sole congressional seat. This action was motivated by Bernie Sander's bid for the 2016 Democratic presidential nomination. My wife Danielle Breck, and I passionately organized and campaigned our way through the primary season. This culminated in attending the Montana Democratic convention as Bernie delegates. While at the convention our enthusiasm and belief in the democratic election of delegates were dashed, as party insiders had already determined who would (or perhaps wouldn't) be attending the national convention in Philadelphia. Critical oversight rulings were amended mid-process to ensure a favorable outcome for specific candidates. Thus our commitment to the Green Party emerged.

A party that will never take corporate donations from the Fossil Fuel industry or any other entity that seeks to minimize, oppress or otherwise further disempower underrepresented and minority communities. A party that cares about social and economic justice. A party that is willing and unafraid to stand up and say "Native Lives Matter," "Black Lives Matter," and "this Planet, our mother, matters!"

We immediately began our petitioning efforts to secure this amazing party's presidential candidate ballot access here in Montana. In two short months we exceeded our goal of 5000 signatures, and ultimately collected more than 12000 in our efforts across the state. Since those elections we have begun serious and highly organized efforts to revive the Green Party here in Montana. We now engage in petitioning efforts to qualify the Greens for the 2018 primary season, as well as helped to organize our first state convention in over a decade. At the behest of our young & old Montana Green Party I am running to become our first Green Party Congress Representative.

I am a devoted husband and the father of 3 beautiful daughters. They are the center of my universe and the reason I want to make our world a more just and loving place. 39 years on this planet have taught me that solutions are real and possible, so long as reason and discourse are achieved. So on behalf of our children, and for the posterity of future generations, I am standing up and running for the current open congressional seat on the Green Party ticket. This is a fight that reaches beyond the (2) party system as evidenced by the more than 50% of US voters who chose to sit out in past elections.

I will fight to reform the current power structure in D.C., and put democracy back in the hands of the people. The lack of voting by the majority of our nation's people is in no way a result of complacency on their part, but because the (2) party system fails repeatedly to provide them with a thoroughly ethical candidate to place their vote. I will stand up to protect our planet, and all its inhabitants, from the harmful efforts of those who presently seek to profit off of exploiting our home to the point of destruction. If I am elected to congress, I will never cease in the fight for all human rights locally, nationally and internationally; I will fight diligently for environmentally sound business and jobs creation in Montana to allow a more realistically long term and sustainable economy; and most importantly, I will fight to protect the headwaters of the Nation's major watersheds.

I was born as the eldest son of my father, a saw mill worker, and my mother, a proud homemaker, in Chehalis, Washington. I was a young child when the Mill my father worked for, along with many others across the state, closed due to the collapse of the Timber industry. As a result, our family was forced to relocate in Texas, so my father could find work - first in the oil fields, and later in carpentry. Not long after, a serious work related injury to his spine found us once again. As a teenager we left Texas and went to stay with my father's brother, in his home state of California. We would then spend the next fews years bouncing between the sunny California coast and the biggest little city in the world, Reno, Nevada. Showing later physical health improvements, my father went back into the construction trade to make a living, and passed the skills of the trade on to me once I was old enough to work alongside him. This would later become my life for nearly two decades. The journey to find my place in the world and find my own identity landed me in Salt Lake City where I applied my trade in the pre Olympics construction boom.

Ushering in a time in my life which exists amidst those I most cherish, I decided to move to Portland, Oregon in the spring of 2000. During a brief stop to visit my parents in the Sun Valley area of Idaho, I met my best friend Danielle, who would later become my wife and the mother of my three beautiful daughters. By the fall of 2004, when our oldest daughter was not quite two, we moved to Missoula so my wife could pursue her education at the University of Montana.

In 2008 the ongoing crashes and instability in the economy made working as a carpenter untenable. Looking towards the future I enrolled at the University Of Montana, and after some time and a only a few declared majors, I became completely focused on public policy. This learned drive to build and get engaged in process organically merged with Danielle's passion for activism, organizing, and political engagement; the result is a drive to advance progressive politics outside of the (2) party system free of billionaire out of state corporate monetary influence. We have an undying supply of optimism, and an unwavering passion for social justice. My beliefs in the needs and for making change are only matched by my hope in the possibilities of a lasting and brighter green future for us all.