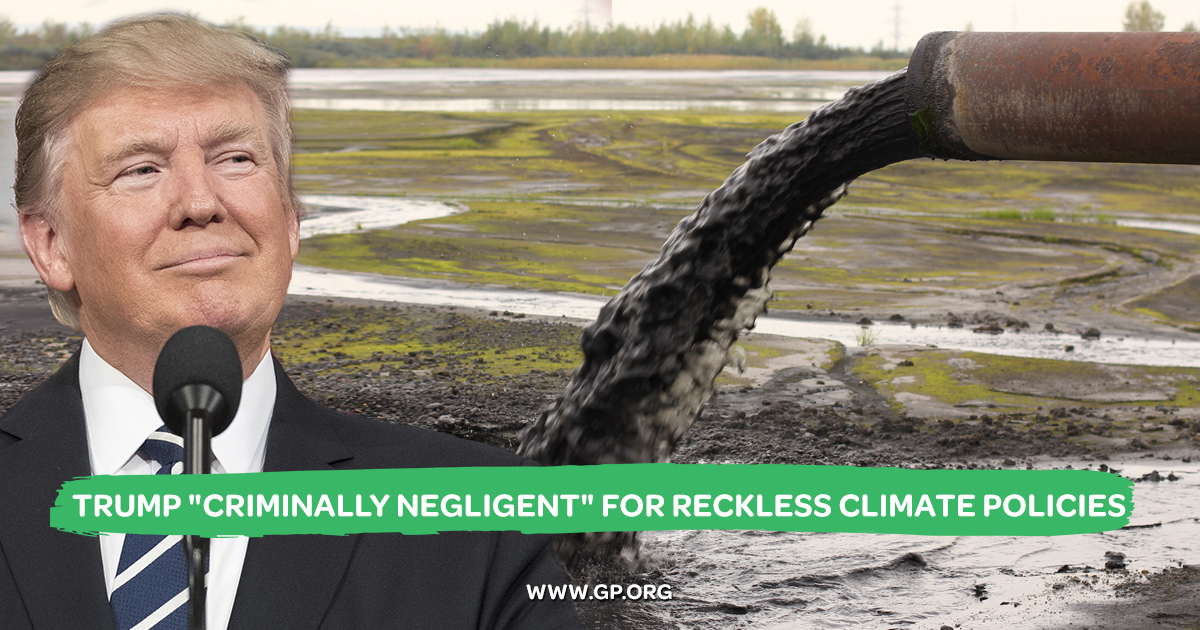 WASHINGTON, D.C. -- Green Party leaders spoke out today about the environmental and public health threat posed by the Trump Administration's reckless industry-friendly actions, including attacks on regulations and Scott Pruitt's appointment to head the EPA.

The Green Party has endorsed upcoming marches for environmental and climate justice, including the March for Science, April 22 in Washington DC; the People's Climate Movement March for Jobs, Justice and the Climate, April 29 in Washington DC; and satellite climate marches throughout the U.S.

Greens are continuing to promote the Green New Deal as an alternative to regressive Republican and compromised Democratic policies.

"The Trump administration's environmental agenda in the era of climate change can be compared with President Bush's inaction during the days before Hurricane Katrina's landfall in Gulf states -- except that the whole planet will suffer the consequences.

"Mr. Trump intends to eliminate the EPA's Global Climate Change Research Program, cut the EPA's $8 billion budget budget by 25%, and cancel funding for collection of methane emissions data from the fossil-fuel industry. Cuts to the National Oceanic and Atmospheric Administration budget will endanger coastal communities that face rising sea levels. Republican commitment to dangerous coal energy is ceding the future to China, which is phasing out coal.

"As with Katrina, scientists are telling us what to expect. By refusing to to take concerted action against an approaching environmental disaster, Mr. Trump is criminally negligent. It is now more than ever time for a real progressive party to govern with progressive people and environment-centered policies".

Darryl! L.C. Moch, co-chair of the Green Party of the United States:

"The Green Party condemns the president's plan to increase the already bloated military budget by $54 billion, which will feed more Pentagon boondoggles. The money will come from cuts for agencies that serve human and environmental needs.

"Mr. Trump will cut funding for cleanup of industrial waste that contains dangerous chemicals and radioactive waste in cities and towns across the U.S., as well as funding for local wastewater treatment facilities despite the continuing Flint water crisis.

"Last year, Green candidates and activists gathered along with thousands of other protesters led by Standing Rock Sioux against the Dakota Access Pipeline. On Jan. 24, Mr. Trump okayed construction of the pipeline. Greens will continue to support Standing Rock and we'll stand with others affected by Donald Trump's reckless disregard for human life and the health of our planet."

"Scott Pruitt serving as EPA administrator is like having a Mafia lawyer in the attorney general's seat. He has lied about the scientific consensus with his claim that CO2 is not a main contributor to global warming.

"Emails released after his confirmation show that fossil-fuel companies and electrical utilities regularly conferred with Mr. Pruitt and his staff, when he was Oklahoma Attorney General, on beating environmental protections. Mr. Pruitt demonstrated his hostility towards the agency and environmental regulation by filing lawsuits against the EPA. His refusal as nominee for EPA administrator to recuse himself from the lawsuits represents a blatant conflict of interest and suggest that he took the position with the intent to dismantle the EPA and repeal regulations".

"Saving our future from Donald Trump requires that everyone who cares about the health of our planet speak out and take extraordinary action. We're already seeing such action, with widespread street protest and civil disobedience, with legal strategies like the Children's Trust federal lawsuit ( https://www.ourchildrenstrust.org/us/federal-lawsuit ), and with the growing movement for clean, renewable energy. Republicans won't be able to stop renewables, which are boosting the U.S. economy and competing with fossil fuels -- even enriching Midwestern farmers and ranchers at $10,000 in annual royalties per wind turbine.

"We can't trust Democratic leaders to make global warming a national emergency. Hillary Clinton and the 2016 Democratic platform refused to oppose fracking and drilling and rejected carbon taxes. At the U.N. climate conferences, the Obama Administration made sure that international measures to prevent CO2 levels from rising above 2 degrees C would not be legally binding.

"We need to get Greens elected at every level of government, from local to national. We need to enact the Green New Deal. Two-party politics as usual will not solve the climate crisis."

This climate lawsuit could change everything. No wonder the Trump administration doesn’t want it going to trial
The Washington Post, March 9, 2017

Trump’s proposed NOAA cuts would disarm our coasts in the face of rising seas, scientists say
The Washington Post, March 9, 2017