Trump is killing us 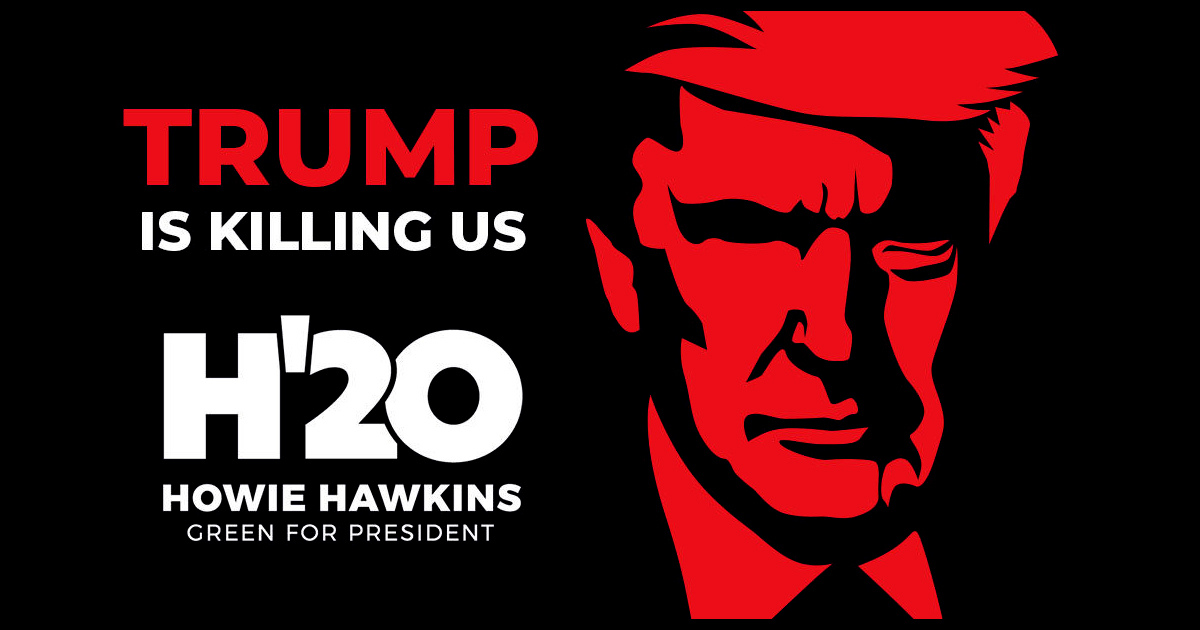 Trump should just resign. He should get out of the way of the public health officials who are telling us how to slow the spread of COVID-19, the health care providers who are trying to heal the sick, and the military and business managers who could quickly put together a plan under the Defense Production Act to produce and distribute needed medical resources to where they are urgently needed.

Trump had reports in January from the intelligence community and public health officials that the pandemic was coming. He told the American people that it was a Chinese problem, that it was another impeachment hoax, that it will disappear like a miracle. His late, deceitful, and misdirected response amounts to negligent homicide.

Now with the coronavirus coffins piling up, Trump has to acknowledge we have a problem. But he is incapable of taking charge and unwilling to authorize a national plan to slow the spread and supply the health care system. Instead, he petulantly refuses to talk to governors who have criticized him or to seek the advice of former presidents and retired generals with experience in dealing with pandemics and natural disasters.

Trump constantly contradicts the advice of public health officials in his coronavirus briefings that he is using as virtual campaign rallies. In concert with a callous chorus of business barons, tech venture capitalists, conservative commentators, and Republican politicians who talk of sacrificing seniors and others in order to save the economy, Trump has constantly undermined stay-at-home recommendations in tweets and rants calling for an early re-opening of the economy. At his April 4 briefing, Trump did it again: “The cure can’t be worse than the problem itself. I started by saying that and I continue to say it. The cure cannot be worse than the problem itself. We’ve got to get our country open.”

COVID-19 infections and deaths are now accelerating in the US faster than any country on Earth. Trump’s incompetence and callous disregard for life should come as no surprise. His policies were killing us before the coronavirus hit. Here are just some of the ways Trump has been killing us before and during the pandemic.

Medical Resource Misallocation: Trump refuses to use the Defense Production Act to organize a nationally coordinated production, supply chain, and need-based distribution plan to get essential medical equipment to hospitals. Instead, he watches as hospitals and all levels of government bid against each other for limited supplies, enabling producers and hoarders to profiteer through price gouging and resulting in a gross misallocation of scarce supplies.

Sabotaging Public Health Advisories: In his nationally-televised coronavirus briefings, Trump constantly contradicts and confuses the advice of federal public health officials to stay at home and wear face masks in public. Trump says following the advice is voluntary and he personally is not following it.

Killing the Affordable Care Act: Trump’s lawyers continue to pursue their case in the Supreme Court to end the Obamacare, which means at least 20 million people will lose what health insurance they even have.

Deregulating Nursing Homes: Trump is trying to weaken regulations that help protect a population particularly vulnerable to the coronavirus.

Maintaining Migrant Detention and Prisoner Incarceration: Trump continues the mass detention of migrants on top of the mass incarceration of prisoners, leaving them especially vulnerable to COVID-19 infection due to close quarters and minimal safety precautions and healthcare resources. Most of these people could be freed without endangering public safety. Keeping them detained and imprisoned endangers public health and safety by spreading infections.

Waging Economic War with Sanctions and Trade Tariffs: Instead of leading an internationally coordinated response, let alone a nationally coordinated response, Trump will not provide sanctions relief for countries like Iran, North Korea, and Venezuela that need immediate trade and aid for supplies to fight the coronavirus pandemic, nor lift the trade-war tariffs on China, which provides much of the world’s drugs and medical supplies.

Rolling Back Automobile Mileage and Pollution Standards: Trump wants us to to pay more to big oil by driving gas guzzlers and to put more lung-damaging and planet-heating pollution into the air.

Gutting OSHA Regulations and Enforcement: Trump is causing more disabilities and deaths for American workers when the Occupational Safety and Health Administration is needed now more than ever with the coronavirus risks at work.

Gutting EPA Regulations and Enforcement: Trump is having the Environmental Protection Agency stand down from enforcing laws and regulations that protect us from disease and death from air, water, and food that is not safe.

Moratorium on FDA Inspections: Through April, Trump has ordered the the Food and Drug Administration to stop inspecting imported food, drugs, and medical equipment, as well as the Chinese drug manufacturing facilities that produce most drugs consumed in the US.

RECOVERING FROM THE TRUMP DEPRESSION

The economy suffered from excess productive capacity, a chronic condition of capitalism that has plagued the US economy since the 1970s. The economy has been kept on life support since then by increasing debt to prop up demand while wages have stagnated since the 1970s and wealth has concentrated in the higher circles. Trump’s tax cuts for the rich and austerity for the public benefits and services that working people use has only accelerated those trends. Even as he knew the coronavirus pandemic was coming, Trump told the global elitemeeting in Davos in January that he planned to cut Social Security, Medicare, and Medicaid after he is re-elected.

Instead of investing in new productive assets that create decent jobs, the investor class has focused on financial investments—stock buybacks, mergers and acquisitions, real estate speculation, predatory lending schemes—that only further concentrate ownership of the productive assets we already have rather than creating new productive assets and jobs. Household debt, corporate debt, and US government debt are at record levels. Those bills were coming due.

The coronavirus economic shutdown is more than just a trigger for a recession that was already baked in to the economy; it is an economic collapse that is plunging the economy down faster and further than it fell in the Great Depression. Trump pro-rich economic policies only set us up for a fall in which working people have fewer resources to cope.

The road to economic recovery should start with a Debt Jubilee. As economist Michael Hudson recently noted in proposing that remedy, “Debts that can’t be paid won’t be.” Will we tax the working and middle classes to bail out the big financial interests as we did after the Great Recession, from which working people never fully recovered? Or will we write down the bad debts, with rich creditors taking the hit for bad loans and government bailing out Main Street instead of Wall Street? With debts cleared off the books, employers, workers, and consumers will be able to get back to business much faster when the economic shutdown ends.

The coronavirus healthcare crisis cries out for improved and expanded Medicare for All. I have proposed immediately instituting National Health Insurance as a single public payer for all medically necessary services for every person. Then, over the next 10 years, we would build out a community-controlled National Health Service. Hospitals and clinics would become publicly-owned, healthcare providers will become salaried public servants, and the system would be governed democratically by a federation of locally-elected health boards.

Predatory Big Pharma would be socialized into this system as a public utility operating at cost for public benefit. We would direct it to do the needed research and development of vaccines, antivirals, and antibiotics that Big Pharma has stopped doing because drugs for chronic conditions are more profitable than short-tern medical treatments that prevent and cure diseases. Under community control, the public healthcare system will be more accountable, more effective at controlling costs, and more rational and just in allocating healthcare resources across all communities.

The coronavirus economic depression demands an Ecosocialist Green New Deal, now for economic recovery as well as for climate safety. To reverse the climate crisis, by 2030 we must rebuild our manufacturing, agricultural, buildings, transportation, and electric power production systems with zero-waste and zero-to-negative carbon technologies that are powered by 100% clean energy. The 10-year, $27.5 trillion public sector Green Economy Reconstruction Program that I propose will build a full-employment economic democracy based on social ownership of the major means of production through public enterprises and cooperatives, particularly in the energy, transportation, and manufacturing sectors. Banks and corporations that fail during the coronavirus depression should be revived as democratic public enterprises, not bailed out to continue as private enterprises. This socialist economic democracy will mean that we the people—not private corporate tyrannies—will have the power to meet the basic needs of all using clean technologies that are ecologically sustainable.

This full-strength Green New Deal that I propose also provides for an Economic Bill of Rights, including the rights to a living-wage job, an income above poverty, affordable housing, comprehensive health care, lifelong public education, and a secure retirement. It has been 76 years since President Roosevelt asked Congress to enact an Economic Bill of Rights to provide this kind of real social safety net. It is long past time to do it. Doing it now will ensure that everyone recovers from the coronavirus depression to a decent standard of living.

MSNBC’s Chuck Todd asked Joe Biden last weekend: “Do you think there is blood on the president’s hands considering the slow response or is that too harsh of a criticism?” Joe Biden: “I think that’s a little too harsh.”

Does Biden really want to beat Trump? He can’t even call out Trump for his failed and self-serving response to the coronavirus pandemic. Yet we are now being bombarded with the “blue no matter who” message to vote for Biden, the neoliberal hawk, to stop Trump, the racist incompetent.

Greens also have the solutions to the single-plurality-winner voting system that encourages voters to limit their choices to two such miserable options. Proportional representation in Congress and replacing the Electoral College with a ranked-choice national popular vote for president would let people vote for the candidates they most favor without helping the candidates they most fear. The single-plurality-winner system used in the US dates back to 1430 to England in the late Middle Ages. It is time to update our voting system.

Anybody-But-Trump is not a solution to the life-or-death crises of coronavirus, climate, inequality, nuclear weapons, and democracy. If the Greens are not in the presidential race, real solutions will not be raised. Eugene Debs once said, “I’d rather vote for what I want and not get it, than for what I don’t want and get it.” That was not just a moral statement. It was a strategic statement. Vote for what you want and make the politicians come to you.