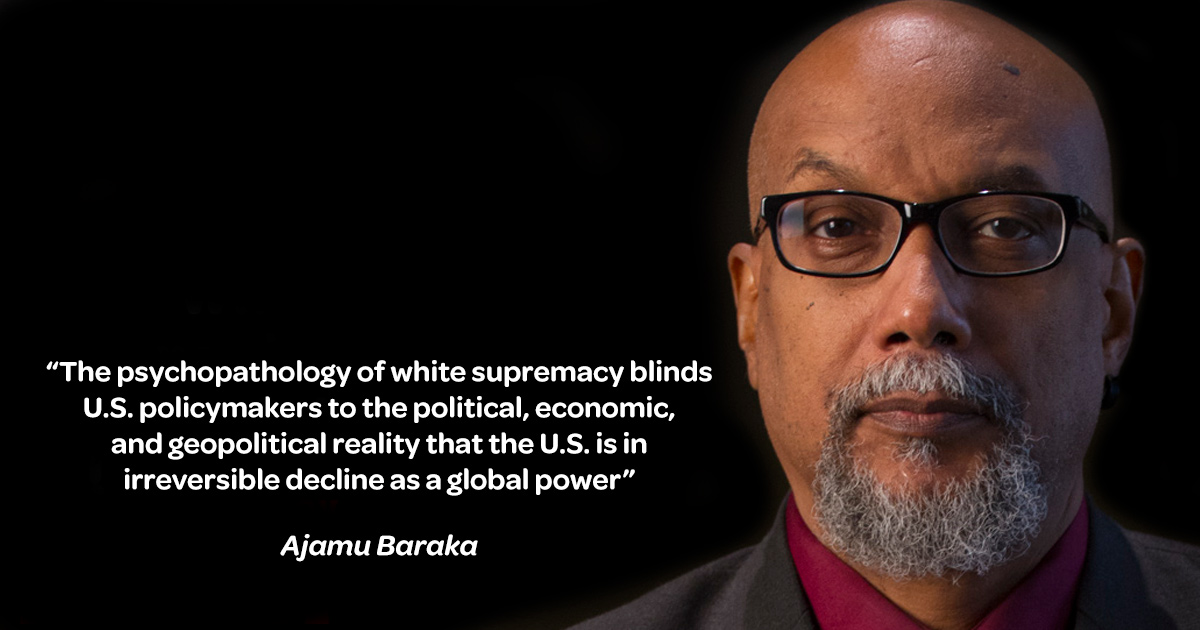 Even before becoming the 45th president of the United States, Donald Trump had one consistent foreign enemy – China. Partly fueled by his intrinsic white supremacy and his antipathy for the liberal elite "globalists" who evoked his personal inferiority complex, Trump has never wavered from his fierce opposition to what he saw as the "yellow peril" from China.

Popular Resistance
By Ajamu Baraka
May 13, 2020

So when the Obama Administration announced in 2011 that the US would make “a strategic pivot” in its foreign policy to focus its military and political attention on the Asia-Pacific, particularly Southeast Asia, which meant China, it was one time that Trump supported Obama’s position – but for very different reasons.

For Trump, the problem was the cozy relationship between finance capital and the transnational corporations they funded during the neoliberal period of rapid and deepening globalization of production. The result of that relationship was that much of the industrial base of the U.S. economy was transferred first to Mexico and then mainland China. Altering that relationship and bringing those jobs “back home” as part of his “America first” position became a campaign issue and his intended first order of business once he assumed the presidency.  Shifting trade relations in favor of his capitalist base in the U.S. was a primary objective, with Chinese containment being a necessary but almost secondary objective.

Trump’s opposition to the Trans-Pacific Partnership (TPP), the “gold standard of trade deals” according to Hilary Clinton before she pretended to oppose the treaty during her 2016 campaign, was seen by the elite as the signature deal that would provide the leverage to contain China’s ambitions in the Asia-Pacific region and globally, while also ensuring the continuity of economic relationships for U.S. transnational capital to utilize China as a profitable zone for the production of goods and services for the U.S. and European markets.

Trump’s opposition to the TPP and his comments regarding the entire architecture of the global neoliberal project of the last forty was seen as reckless and made him a threat. The financial and corporate transnational elite moved swiftly operating though the state and media to destabilize his administration, even before he took office. That faction couldn’t care less about his rhetoric on race, Muslims, and immigration, in fact, his theatrics became a very valuable distraction while they completed the strengthening of the national security state under Bush and Obama and plotted to either get rid of Trump or impose the discipline of their agenda on his administration.

As Trump saw it, completing the pivot to Asia required one strategic angle – reducing tensions with Russia with the intent to bring them into the fold of “Europe” in order for the U.S. and Europe to combine forces to discipline China. What Trump hadn’t anticipated and was clearly unprepared for, was the ferocity of the efforts to make it impossible for him to govern. Russiagate became the issue that would block his plan to reconcile with Russia and bring the full force of the state against China.

But, today, after having survived the most unprecedented efforts by unelected power to undermine his presidency — perhaps in the history of the U.S. nation/state short of the actual assassination — Trump has the support of a growing coalition of forces across the ruling class spectrum that represent a new and growing consensus that China is out of control and is a real threat to U.S. global hegemony.

Limiting China to a specific role in the international division of labor was always part of the plan even when China received “most favored Nations status” in the 90s and membership in the World Trade Organization.

The relationship between U.S. transnational capital and the Chinese state was seen as a win-win. China served as a platform to produce goods and services for U.S. markets providing jobs for Chinese labor and revenue for the state while providing price-competitive products for U.S. consumers. In the process, it was assumed that China’s integration and participation in the global capitalist order would result in the “liberalization” of their economy and political system and open up an enormous new market for U.S. capital.

The problem, of course, was that the Chinese had their own plans.

The new bipartisan, ruling class consensus that more aggressive measures were needed to contain China was captured in the now-infamous “pivot to Asia”  announced by Barack Obama in 2011.

Today the growing ruling class consensus that has given new life to Trump’s anti-China campaign is reflected in the positions that say economic integration with China did not result in any transformation of China into a “regular” capitalist nation. And with the Chinese Belt and Road Initiative (BRI) introduced by Chinese President Xi Jinping, China is an existential threat that can only be countered by military means.

The psychopathology of white supremacy blinds U.S. policymakers to the political, economic, and geopolitical reality that the U.S. is in irreversible decline as a global power.  The deep structural contradictions of the U.S. economy and state were exposed by the weak and confused response to COVID-19 and the inability of the state to provide minimum protections for its citizens and residents. But even in decline, the U.S. has a vast military structure that it can use to threaten and cause massive death and destruction.

This makes the U.S. a threat to the planet and collective humanity because U.S policy-makers appear to be in the grip of a death-wish in which they are prepared to destroy the world before voluntarily relinquishing power, especially to a non-European power like China.

For example, when Secretary of State, Mike Pompeo declared in public that the United States and its Western European allies must put China in “its proper place,”  this represents a white supremacist mindset that inevitably will lead to monumental errors of judgment.

This white supremacist, colonialist mentality is unable to accept the full and equal humanity of non-Europeans and, therefore, are driven to an irrational obsession with preventing what is now inevitable – global hegemony passing to China.

To prevent this objective eventuality, U.S. policymakers are openly advocating war with China. Not only war, but a war that some of them argue must take place before 2025!

And this is not some wild construction from the Trump Administration.

More than a decade ago military strategists war-gamed on how to defeat the Chinese concentrating on fuel supplies and trade routes. The RAND Corporation described during the Obama Administration how the U.S. could defeat China in a conventional war and in 2011, the Council of Foreign Relations began to urge the U.S. to withdraw from the Intermediate-Range Nuclear Forces (INF )Treaty which it did in 2019 in order to redeploy intermediate-range missiles off the coast of China.

COVID-19, that the Trump Administration constantly refers to as the Chinese virus, and the blame game being played, is preparing the public to support conflict with China.

However, The Chinese are aware of the dangerous turn of events with COVID-19 and are preparing accordingly. And here is the real danger.  Forces within the Chinese Communist Party and military are warning that the nation must prepare itself for all contingencies, including armed conflict.

For African Americans, we must resist all efforts to draw us into a conflict that has nothing to do with us. We must be clear that we are not going to allow our sons and daughters to be sacrificed in yet another war of aggression on behalf of white capitalist/colonial power.

We must reject anti-China propaganda being directed at our communities using lurid stories of Chinese anti-black racism in China and the alleged attempts by the Chinese to “colonize” Africa, a position that is both absurd and insulting in how it trivializing the brutal reality of European colonization that the continent has yet to recover from.

Trump is winning the propaganda war on the Chinese issue because at its core the U.S. is susceptible to appeals to cross-class white racial solidarity against the uncivilized hordes. Samuel Huntington’s “Clash of Civilizations” did not just resonate with right-wing audiences but was an acceptable commentary on the challenges of Western modernity.

However, we must remain clear about who our enemy is. It is not the Chinese who are beating us down in the streets for not social distancing, who have denied us medical care, imprisoned us, killed us, poisoned our water, and forced us to face death on a job just to survive.  We got a historical beef, but it ain’t with China, Russia, or any of the enemies of the U.S.

Ajamu Baraka is the national organizer of the Black Alliance for Peace and was the 2016 candidate for vice president on the Green Party ticket. Baraka serves on the Executive Committee of the U.S. Peace Council and leadership body of the United National Anti-War Coalition (UNAC). He is an editor and contributing columnist for the Black Agenda Report and contributing columnist for Counterpunch. He was recently awarded the US Peace Memorial 2019 Peace Prize and the Serena Shirm award for uncompromised integrity in journalism.