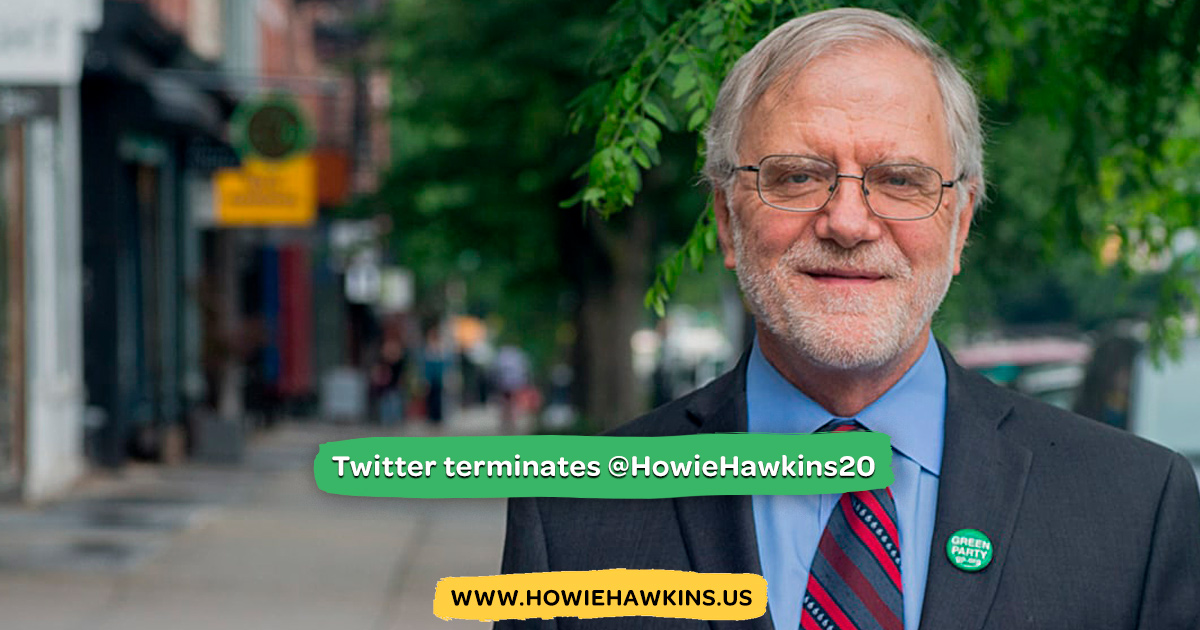 (SYRACUSE, NY, April 17, 2020) Howie Hawkins, who is leading in the primaries for the Green Party nomination for President, has been notified by Twitter that his campaign account is terminated.

Twitter terminated the account without any notice and said that there was no ability to appeal. Twitter said that the account violated its rule on impersonation. Besides not providing any process to appeal the termination, Twitter provided no information as to why it concluded the Howie Hawkins' president campaign account was impersonating Howie Hawkins or his campaign.

Green Party presidential candidate accuses Twitter of censoring campaign Green party presidential candidate Howie Hawkins recently had his campaign Twitter account totally expelled, along with a number of alternative voices in the media or social activists, a growing trend that seems to be clamping down on free-speech as we draw closer to the elections in November. Howie Hawkins himself joins In Question to discuss.

"How do I impersonate myself? Twitter's explanation for its censorship makes no sense," Hawkins said.

"Corporate America fights hard to make sure the public doesn't get to hear about challenges to the status quo and the two corporate parties. The US has among the most discriminatory and unfair electoral systems in the world among the countries that hold elections. COVID-19 is already blocking our access to the ballot since street petitioning had to be suspended. We have enough problems with trolls and fake news without the corporate owners of social media trying to silence us," said Hawkins, who has three times won enough votes as the Green Party candidate for Governor in New York to give the party official ballot status there.

Hawkins has seen a major upsurge in donations and followers on his Twitter account since Bernie Sanders suspended his presidential campaign and endorsed Joe Biden. Hawkins, a co-founder of the national Green Party, has also been nominated by the Socialist Party USA. Hawkins is a retired Teamster from Syracuse, New York.