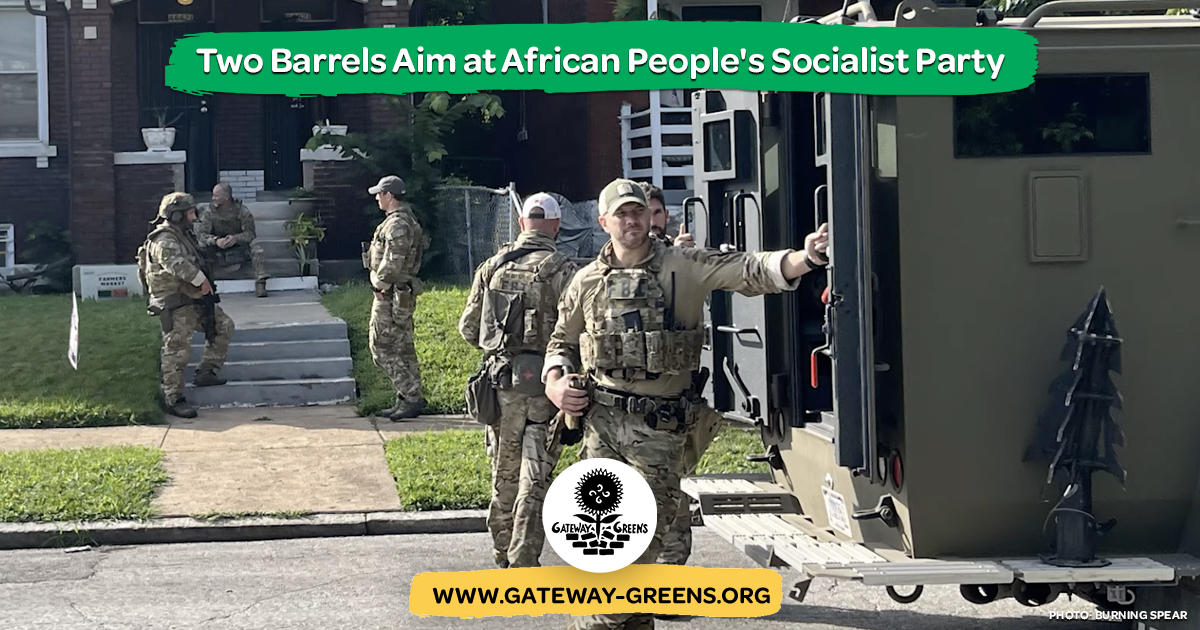 The Green Party of St. Louis fully agrees with the right of African people to advocate and organize for the unification, liberation and self-determination of Africa and African People as laid out in the "Principles of Unity."

The FBI raid of July 29, 2022 was not just against the African People's Socialist Party (APSP). It was an attack on all working for social justice and liberation.

The FBI raid of July 29 was not just against the APSP. It was an attack on all working for social justice and liberation.

As has happened many times before, governmental violence was unleashed first against Black/African victims to serve as an example.

The Biden administration is fully responsible for opening one of the most repressive eras in US history.

We would have to go back to the racist president Woodrow Wilson and his imprisonment of Eugene Debs to find a case of people being arrested so blatantly for their political beliefs.

Even during the US war against Viet Nam, people were not arrested merely for listening to Vietnamese views or visiting North Viet Nam.

The current actions of the Biden administration are a message that no one can question his proxy war against Russia – a message that Americans have lost the right to make their own decisions.

The events of July 29, 2022 are meant to intimidate any who stand in solidarity with movements and countries who are struggling for their liberation, such as Cuba.

They are warning that the same could happen to supporters of revolutionary Venezuela.

The FBI raids are a threat to those who defend the right of Nicaragua to chart its own course.

Indictment of Uhuru members aids and abets those criminals who overthrew the democratically elected government in Peru on Dec 7, 2022.

Biden's proxy war against Russia gives lie to his supposed opposition to climate change. One of the real reasons for Biden's "Hate Russia!" campaign is to allow US corporations to corner the market of fossil fuels in Ukraine and force Europe to buy US natural gas at absurdly high prices.

Under Evo Morales, Bolivia sought to control its own lithium, a critical element for "alternative" energy. When he was violently overthrown, the Trump/Biden supporter Elon Musk (of Tesla fame) proclaimed "We will coup whoever we want!"

The great majority of the world's cobalt, also essential for "alternative" energy, lies in the Democratic Republic of the Congo (home to many other essential minerals). Efforts of the Biden administration to destroy the APSP reveals his plan for anyone who advocates self-determination for Africa.

Find out more about the repression! At 6 pm CT, January 9, 2023 join the APSP update on the indictments and defense. Click on https://handsoffuhuru.org/ and scroll to "Hands Off Uhuru! Hands Off Africa!" to register. At 7:30 pm CT, January 11, 2023 the Missouri Green Party will have a webinar on "The Long Story of Repression in the US." Email [email protected] to get information and to register.

Don Fitz ([email protected]) is on the Editorial Board of Green Social Thought, where a version of this article originally appeared. He was the 2016 candidate of the Missouri Green Party for Governor. His book, Cuban Health Care: The Ongoing Revolution, has been available since June 2020.