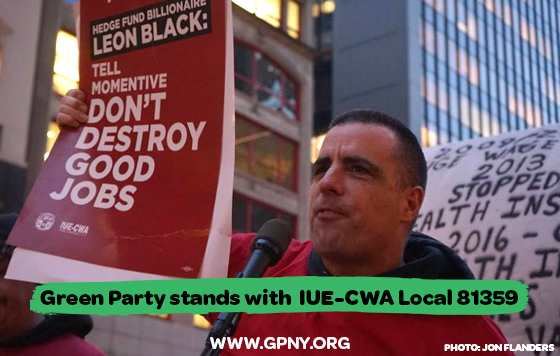 MPM is a multi-billion dollar company that made nearly $400 million in profits last year. Management's decision to assault workers' wages and benefits is clearly designed to add to the bottom line and the paychecks of executives like Leon Black. This enormous greed, so typical of huge capitalist multi-national corporations, is poised to have a devastating impact on solid working-class jobs and the community of Waterford. It is not enough that MPM has ruined the health of its workers and endangered that of the surrounding community; it intends to destroy their economic well-being while continuing to reap obscene profits from their labor. The UHGP demands that MPM's management returns to the bargaining table, accepts the union as a good-faith bargaining partner, and offers the workers a contract that increases their standard-of-living and job security.

The UHGP also recognizes that labor and environmental laws need to radically change. Elected officials must write and pass legislation that: 1. Outlaws the use of scab labor; 2. Repeals Taft-Hartley and allows for sympathy strikes; 3. Creates a system of single-payer universal healthcare; 4. Creates environmental regulations to protect workers from hazardous and deadly environmental working conditions. It is not enough for officials to visit the picket lines: those with power must use it to enhance the long-term condition of all workers. The UHGP regards as suspect any elected official that refuses to write, co-sponsor and agitate for legislation that changes the structural balance-of-power for labor and workers, whether the elected official's party is in the majority or minority. A labor movement for radical change needs allies in government that will truly aid it, or it must build a movement for independent political change that will do so.

Finally, the UHGP supports the working class struggle of the IUE-CWA workers against big capital and management because it shows how collective action of workers and community members will build a better, more egalitarian and grassroots democratic future. The Green Party supports an economic system where workers control and direct the economy for the benefit of society – what we often call economic democracy or socialism. Over the last 70 days the IUE-CWA workers have built a movement that shows how a community concerned with its livelihood and environmental well-being can rally together for the benefit of all. By defeating the greed of Leon Black, Apollo Global Management and MPM's executives, the workers of IUE-CWA, people of Waterford and the allied groups around the region, state, country and world will build a better, more equitable tomorrow. The UHGP adds its voice to those and stands ready to help in that struggle.

The Local Membership of the Upper Hudson Green Party