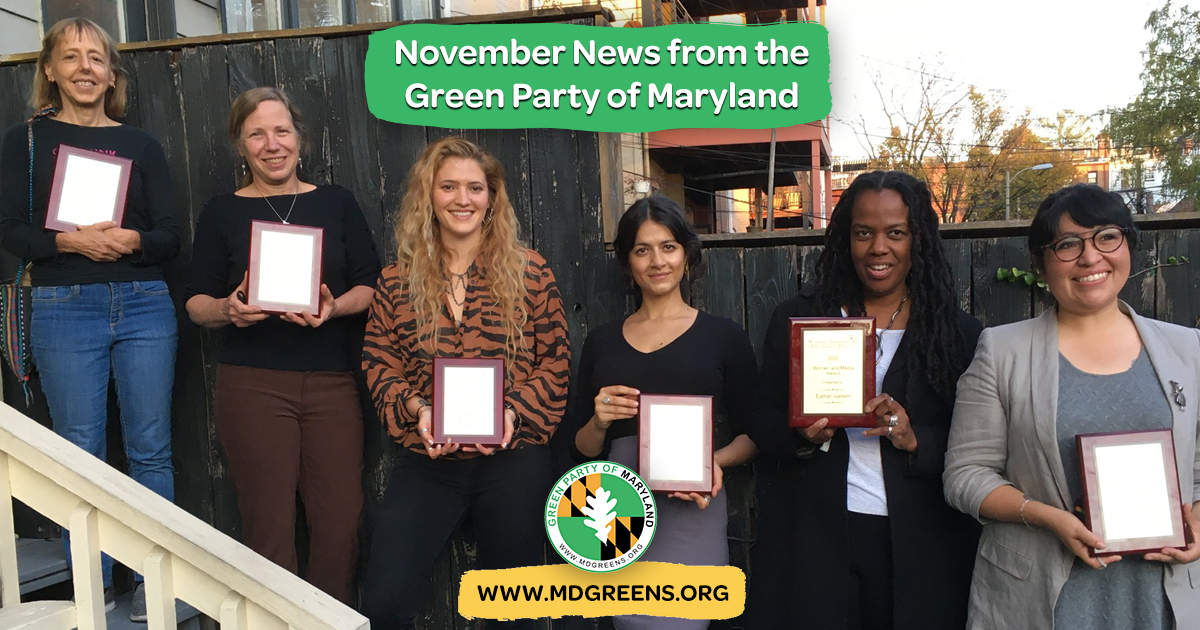 Pro-democracy movement in the streets 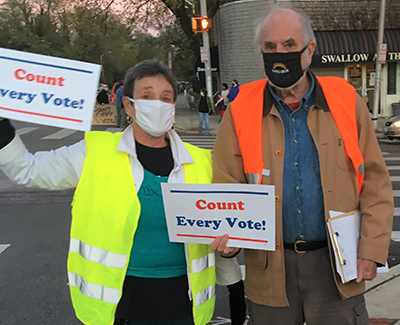 Baltimore Green Party members came out to a demonstration across Northern Parkway on November 4 to demand that all votes be counted. In the photo are Erica Harts'horn and Bill Barry, who were also joined by Cynthia Marshall, at the corner of Northern Parkway and York Road. There were demonstrators at every major intersection in Baltimore after a press conference at a church in Pimlico. Post-election, Green Party members across the country are rallying to protect the democratic right to vote and have every vote be counted, and remain involved in many local political activities and community organizing at this crucial time in our city and country.

The Franca Muller Paz campaign for Baltimore City Council was an unprecedented success for the Green Party movement in Maryland. In just 100 days, the campaign recruited hundreds of volunteers, friends and allies, raised over $120,000, knocked on thousands of doors, held outdoor rallies, concerts, and virtual events, garnered significant media attention, and received prominent endorsements from unions, organizations, local leaders, and even a sitting Baltimore council member, Zeke Cohen. In the end, the campaign won 4,571 votes (provisional ballots still to be tallied), which was 35.8% of the total. This is the highest vote percentage won by the Baltimore Green Party in its 20 year history.

The campaign was significant for the diverse multi-generational, multi-racial coalition of allies and organizers that it brought together. It has generated significant energy for further organization around issues of economic, environmental and racial justice. The conversations and planning are underway. The movement and the struggle continue.

Despite running against an incumbent who spent more than $30 million on their campaign, at the beginning of 2020, George Gluck was determined to do the one thing he had not done in any of his previous campaigns for Congress: ask for donations of time and money. He was prepared to continue substitute teaching in CD6 high schools (in Montgomery and Frederick Counties) and knock on neighborhood doors, as in previous elections. And then came COVID-19, making ballot access for the Maryland Green Party and greeting voters face-to-face at their doors and at forums difficult.

As during previous runs, he still focused on voter education, especially with young people. Last campaign he presented to three of Colman McCarthy's classes at Bethesda-Chevy Chase High School and students at Clarksburg High School who put together a CD6 forum. This year a student emailed and asked if he were running for Congress, resulting in a Tik-Tok presentation viewed over 200,000 times! Even with difficulties from COVID, Gluck received about the same number of votes as in the past. He looks forward to 2022 when, with ballot access already attained, he will be relying on volunteer time and donations for an even stronger run.

What Next for the Left?

Howard County Green Party activist and Maryland Green Party Co-chair Virginia Rodino participated in a panel discussion with Paul leBlanc and August Nimtz on “Biden Wins: What Next for America and the Left.”

On Sunday, November 8, Baltimore City Green activist Dr. Margaret Flowers received the Women and Media award from the Women's Institute for Freedom of the Press in Washington, DC, for her work as director of PopularResistance.org, a daily movement news website, and host of Clearing the FOG radio. Flowers received the award with five other women: Alina Duarte, Anya Parampil, Eleanor Goldfield, Esther Iverem and Medea Benjamin. A small reception was held at the institute. 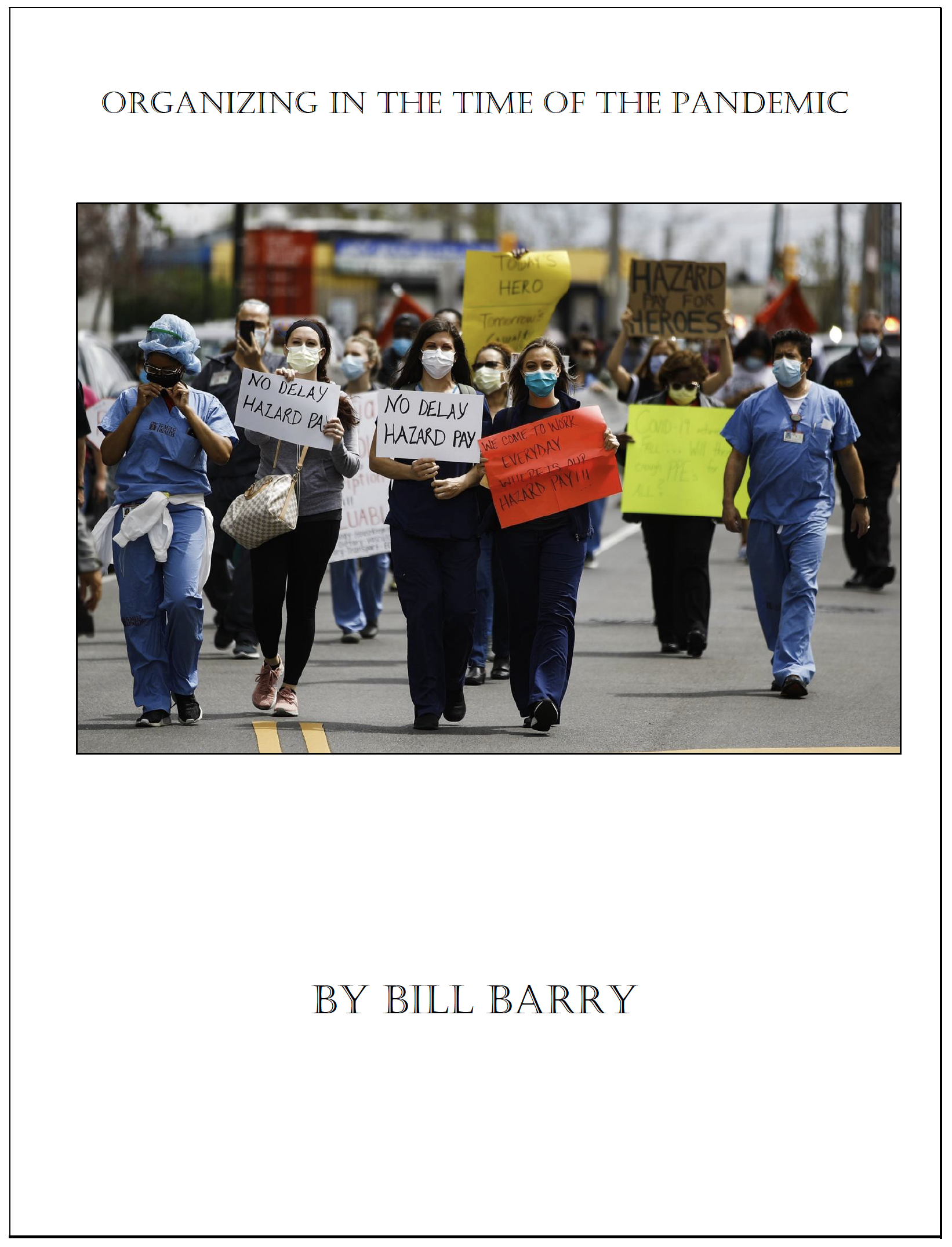 Baltimore City Green Party activist and labor historian Bill Barry gave a rousing talk last month to picketing UNITE-HERE members outside the Waterfront Marriott -- a hotel in Baltimore’s Inner Harbor which pays a whopping $1 a year in property taxes. The workers were demanding a first contract and to have recall rights when the hospitality industry recovers. They are also demanding that the hotel continue their health insurance coverage.

Bill was also interviewed by Professor Ericka Wills of The Labor Center at Los Angeles Trade Technical College, about his booklet “Organizing in the Time of Pandemic.” She assigned the book to one of her classes and asked Bill to discuss it with them.

McCarthy had previously said that he had reviewed the Maryland law with the company and advised them of their legal obligation to notify his office of any significant archaeological findings. However McCarthy rebuffed the BACC lawyers by citing a statement by the county historic preservation commission that there was no evidence for a burial ground in that area.

The Maryland Green Party will continue to stand with the BACC and fight to honor the African American bodies buried on this land.

Join the Baltimore City Green Party and Franca Muller Paz for a chat about how you can get involved with the people powered politics of the BGP. To be streamed via Zoom and on BGP’s Facebook Page (@baltimoregreens).

The 2020 election is over, but the movement for multi-party, multi-racial grassroots democracy to achieve social and climate justice in a more peaceful Baltimore City continues.On Saturday, November 21, 2020 we held an online Green Party Memorial Service for Kevin Zeese. It was a safe space for Green Party members and allies to remember Kevin and discuss how we can help move forward the work to which he was so dedicated. During the service we launched a Kevin Zeese Memorial Fund. This fund will help support Green Party projects and campaigns that follow the spirit of Kevin’s efforts in areas such as media, legal defense, ballot access, democracy and direct action.