Freedom Rider: The U.S. is a Racist Militia 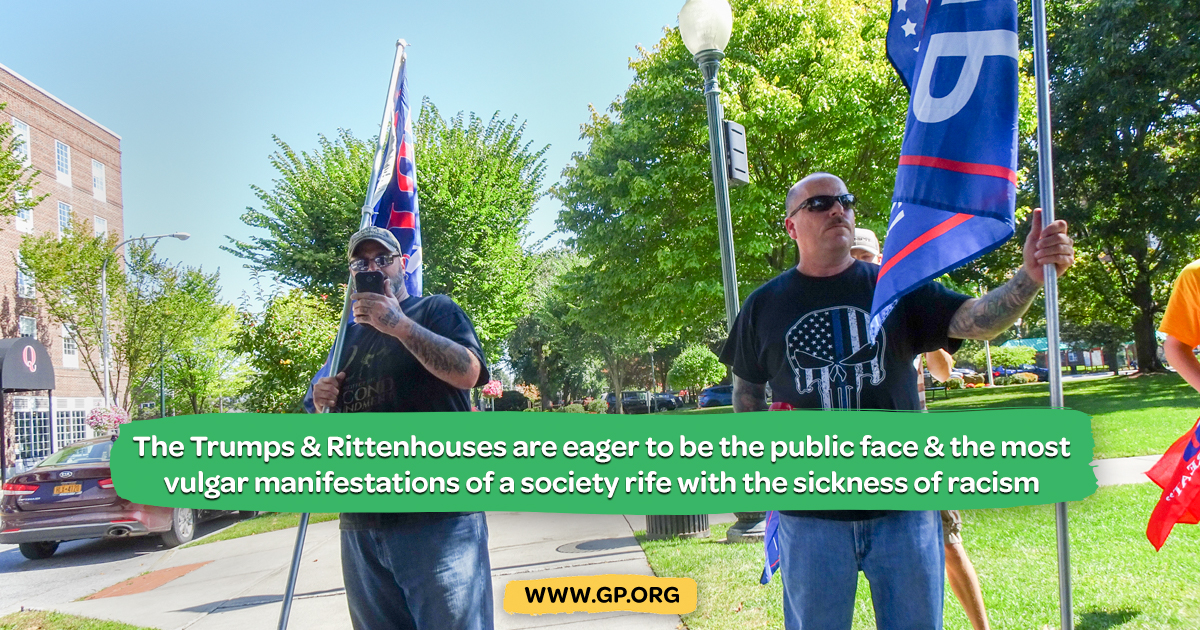 U.S. cops are already racist and brutal, and any militia "infiltrators" would feel right at home.

"Kyle Rittenhouse was acting like the police who shot and severely wounded Jacob Blake."

It is common to see news stories reporting that white supremacists or right wing groups have infiltrated police departments. Such information should always be greeted with skepticism. Law enforcement in this country is very much right wing and inherently white supremacist. There is no infiltration necessary. Any police officers found to be members of the Ku Klux Klan or Proud Boys or any other configuration are outliers only in that they thought it necessary to make their affiliation official.

The connection between law enforcement and white supremacists operated quite openly in Kenosha, Wisconsin. After Jacob Blake was shot seven times in the back by police in that city, massive protests erupted. Several nights later, a white 17-year old named Kyle Rittenhouse traveled to Kenosha from nearby Illinois after a militia gathering was announced on Facebook. Armed with a rifle he shot two men to death and seriously injured a third.

Of course, law enforcement is a reflection of the very ethos of the country it represents. Facebook, the enforcer of official narratives masquerading as entertaining social media, allowed a group calling itself the Kenosha Guard to announce their presence in that city. Their invitation read, "Any patriots willing to take up arms and defend our city tonight from the evil thugs?" Their much-vaunted rules meant little, even as the event was flagged 455 times by Facebook users who pointed out that groups espousing violence are allegedly not allowed to appear on that platform. Mark Zuckerberg apologized after the double murder and blamed a contractor for "an operational mistake." The contractor knew one very important thing, that right wing violence is meant to keep black people under control and is therefore nothing for them to be concerned about.

Facebook is well known for kicking black users off if any white person complains about their posts. If the Israeli government tells them to remove Palestinian users and sites from the platform, they are summarily disappeared. Facebook follows the dictates of the Atlantic Council, an arm of NATO, in determining what is and is not real news. But they disregarded their own rules and helped to announce a gathering of armed people in a volatile situation. It is easy for operational mistakes to occur if doing so upholds the belief that white makes right.

The police in Kenosha did likewise. They chatted amiably with Rittenhouse and told him, "We're glad you're here." They even gave him a bottle of water. They never told him that he violated their department's curfew and after he shot three people he walked by a police vehicle unmolested. Bystanders pointed him out as a shooter but the police rolled right past and proceeded to tell protesters who hadn't killed anyone that they had to disperse.

News stories about the teen killer described him as "an aspiring police officer." The irony must have been lost on them because he was already acting like the police who shot and severely wounded Jacob Blake. Despite being very seriously injured and paralyzed by the bullets, Blake was handcuffed to his hospital bed. They were not removed until his family and attorney reported this condition to the media.

White supremacist violence didn't start in Kenosha with the arrival of the Kenosha Guard and Kyle Rittenhouse. It was already there, as Blake can attest. But it is everywhere, not just in the police departments where brutality cases suddenly make the news. The nation is white supremacist from top to bottom and police, politicians, and corporate media all uphold it.

Donald Trump predictably praised Rittenhouse and claimed he acted in self-defense. We are now told to dissuade protesters or scold looters because the tender sensibilities of people who don't care about police murder could lead to a Trump victory. But we should not be surprised if Trump wins again. His 2016 election proved that more than 60 million people were quite comfortable with his presidency and his open support of racist tropes and policies.

Trump's praise for killers and pundits who whine about law and order are quite representative of the country as a whole. Of course they don't care about victims of police violence and they care very much about the police. That is also true for millions of people who would not join the Kenosha Guard or wear a MAGA hat. Police brutality exists because it is widely supported. There are two million people in prison for the same reason. The sad fact is that this country is one giant racist militia. The Trumps and Rittenhouses differ from others only in their willingness to be the foot soldiers. They are eager to be the public face and the most vulgar manifestations of a society rife with the sickness of racism.

Margaret Kimberley's Freedom Rider column appears weekly in BAR, and is widely reprinted elsewhere. She maintains a frequently updated blog as well at patreon.com/margaretkimberley and she regularly posts on Twitter @freedomrideblog. Ms. Kimberley lives in New York City and is a member of the Green Party of New York.