‘Virus or no virus, we can’t lose our voice’ 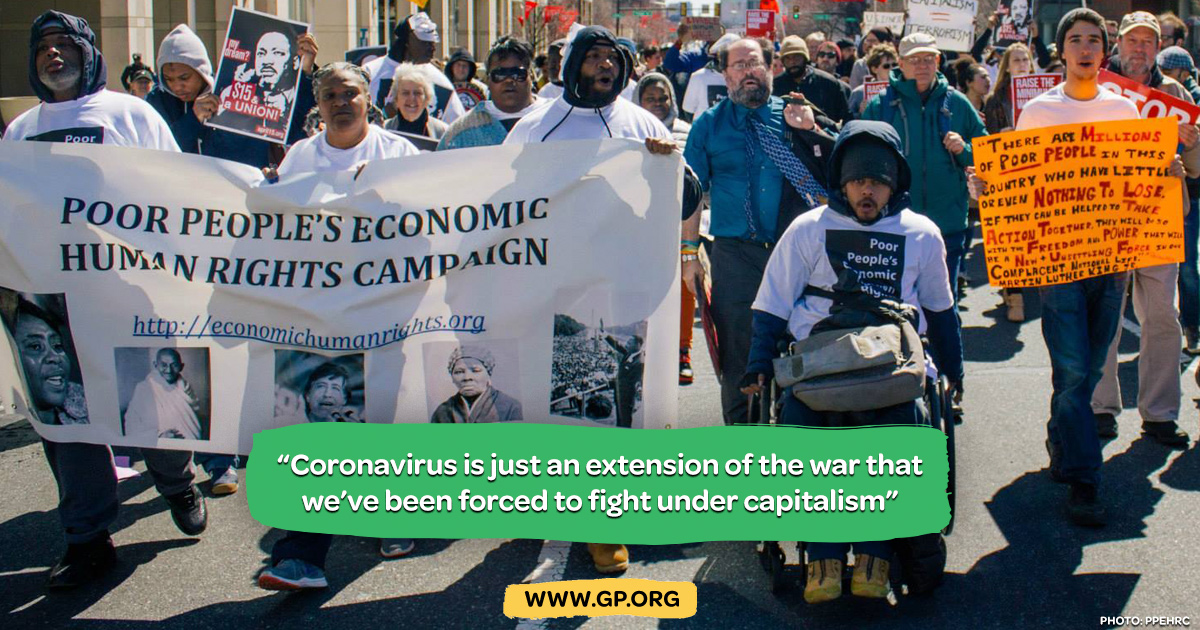 Cheri Honkala has been organizing in the Kensington neighborhood of Philadelphia, one of the US’s most devastated, post-industrial communities, for over 30 years. As of the 2010 census, Kensington was 38.9 percent Hispanic of any race, 37.4 percent non-Hispanic white, 14.8 percent non-Hispanic Black, 6.2 percent Asian, and 2.7 percent all other. And it’s beginning to be threatened by gentrification.

Cheri is one of the founders of the Poor People’s Economic Human Rights Campaign (PPEHRC), and her work has been so impressive that Green Party presidential candidate Jill Stein asked her to be her running mate in 2012.

I asked her how the coronavirus pandemic is affecting Kensington.

Ann Garrison: Cheri, are you seeing cases of coronavirus there in your neighborhood yet? Does anyone have access to testing?

Cheri Honkala: No, we have no idea if we’ve come into contact with anyone who has the virus yet. There’s no testing, but we’ve most likely been exposed.

Public clinics are postponing appointments at the last minute and rescheduling for July due to the virus, but these are services that people need now. We already have bad health. Our health has never much mattered, but there are good, caring doctors and nurses in the system.

Someone from the public health center said they’re moving to online appointments, but poor people don’t have computers to be talking to their doctors and getting checkups through the phone. We know that people in other parts of the world like Canada and Australia now have access to testing and an equitable response to the virus because they have universal healthcare. But we don’t have that.

We seem to be moving further towards the privatization and corporate takeover of all public services and health access. And under the guise of protecting our health, it seems like they’re going to be scooping people up soon, with or without their permission, and putting them who knows where.

AG: Has Philadelphia’s Public Health Department reached out to you in any way? Have you tried to reach out to them?

CH: No. Philadelphia is one of the poorest large cities in the country. PPEHRC and the Poor People’s Army have been absolutely overwhelmed both in Philadelphia, where our headquarters is, and throughout the country. We’re assisting people who suddenly have no income and are stuck in their homes for the foreseeable future, if they can hold onto their homes.

We’re helping a woman who’s being released from the hospital to homelessness, a victim of domestic violence needing to get into safe housing, and people needing psychiatric care but not able to get into the hospital. And those are just a few examples of who we’re trying to help.

Coronavirus is just an extension of the war that we’ve been forced to fight under capitalism. It’s not just the virus, but that’s made it worse.

The media is fear-mongering, and misinformation is spreading. Corporations, politicians and poverty pimps are rushing to profit from this moment. Not only have they not reached out to us, but they’re hiding from us because they are either working remotely from home or they’re operating from the politics of scarcity.

AG: As I write this, it’s 49 degrees in Kensington and 49 degrees here in Berkeley, where there are roughly 1,000 homeless people on the street, in a city of roughly 125,000. But it’s still morning out here and it’s well past noon there.

It’s not the dead of winter, but it’s not a good day to be homeless in either place, or to live in a house or apartment that doesn’t have heat. It’s not a good day to recover from coronavirus or any kind of cold or flu, especially if you don’t have running water to wash your hands. Do you have any estimate of how many people are facing one or both hardships there in Kensington, a city area of roughly 25,000?

CH: There are about 2,000 homeless people on the streets in Philly on any given night. Because of advocacy efforts before the coronavirus, no one’s utilities can be shut off. But that doesn’t mean that utilities that were already shut off can be turned back on.

AG: At the 2016 Green Party Convention in Houston, you shared films about Kensington and said that you thought frontline communities should emulate the Black Panther Party. Could you talk about that here?

CH: For decades, the Poor People’s Economic Human Rights Campaign has been teaching people how to reclaim abandoned houses across the country and reclaim land. And to grow food to feed ourselves.

We need to move in our organizing work from a reformist model to a revolutionary model. Corporations and the rich are never going to care about us, never going to take care of us, so it’s time we get organized and reclaim our basic economic human rights to food and housing. And whether or not we have health care shouldn’t even be up for negotiations.

AG: Is the PPEHRC supported solely by donations and volunteers?

CH: We are trying to be the US version of the Zapatistas. We are separate from the nonprofit charity model and are funded by individuals and small foundations. No banks and no corporations.

CH: We have a 501(c)3 fiscal sponsor that accepts tax deductible donations for us.

AG: During the March 15 presidential debate, both candidates said repeatedly that victims of coronavirus must be “made whole” by financial support if they and their families lose work or housing after coming down with coronavirus. And I kept thinking about all the people who have already lost both, those living on the streets or in other desperate circumstances, who haven’t been “made whole.”

Suddenly the welfare of all members of society is of concern because even those most marginalized can spread the disease to the upper echelons by going to work, not getting tested, or not seeing a doctor. The New Yorker published a report headlined, “How Much Is the Coronavirus Infecting World Leaders and Disrupting Governments?“

I’m sure you have something further to say about this.

Those of us in frontline communities more than ever need to demand and take back our right to food, clothing, housing and medical care, because we can’t sit on the sidelines waiting for someone to save us. That’s not gonna happen. We need to link arms and remember that all we have is each other, and we’d better get organized to take housing, to take land, to take back a future for ourselves and our children.

CH: This coronavirus is infecting the upper classes, so they’ll look for ways to protect themselves, but it’s not about protecting us. As a formerly homeless mother, I’ve always known that we and our children have never mattered.

And I’m very clear that they try to create an us and them scenario – a deserving and undeserving poor. We know the reality is that most people are only a paycheck away from a disaster like the coronavirus.

Those of us in frontline communities more than ever need to demand and take back our right to food, clothing, housing and medical care, because we can’t sit on the sidelines waiting for someone to save us. That’s not gonna happen. We need to link arms and remember that all we have is each other, and we’d better get organized to take housing, to take land, to take back a future for ourselves and our children.

We know they’re going to use this as an opportunity to do more homeless encampment sweeps, enact curfews with the pretense of caring about our health, fast-tracking homeless mothers and their kids into foster care and adoption.

It’s really important right now that we check in on our brothers and sisters who are in prisons, nursing homes and packed into one-room shelters. We have to advocate for them because authorities are not going to take care of them without pressure.

AG: Tell me what else you’d like to say about coronavirus in poor and homeless communities. CH: It all comes back to the slogan we’re raising that we need to put #LivesOverLuxury, while they put the elite luxury class over any of us. They’re killing us. That’s why we’re taking this message to both the DNC and RNC, virus or no virus, because we can’t lose our voice, and we fundamentally need a different society to respond to ongoing crises like this that will only escalate.

The coronavirus has exacerbated class divisions. Our kids who were attending schools that weren’t good to begin with are now supposed to attend them online, but many lack access to home computers. People are staying home and not making any money from jobs that are on pause, and they’re waiting for essential health services.

It’s also important that there’s a whole section of people who don’t speak English as their first language, and they’re already being targeted by ICE and state agents. But we’re going to continue to practice the politics of love where we aim for a different kind of society where we take care of each other.

At a time when big nonprofits aren’t here, we are continuing to operate with boots on the ground out of necessity. Not that we’re being careless or not taking the virus seriously, but the reality of people’s economic situation is real and that’s what we’re going to be hearing over the days to come. Maybe the utility shutoffs, evictions and foreclosures are on pause right now, but those bills aren’t going away, and people are losing money every day this goes on.

We encourage people to join the Poor People’s Army. We need to make sure we keep our eyes wide open, and keep the propaganda on TV from separating us, isolating us and disempowering us. Join us at livesoverluxury.com and plan on coming to the Democratic Convention in July.

On July 13, at 4 p.m., we will be in Milwaukee to demand our share of the 67 cents of every single dollar that goes to feed the war machine and deny poor and working class people their right to health care, food, housing and dignity.

We have nothing to lose because we are already on the frontlines, already sentenced to death by gun violence, economic violence, cuts in food stamps and public housing, and, for many outside this country, sanctions. Our government, both Democrats and Republicans, chooses war and corporate profits over ending poverty and homelessness.

We see the abundance in our country, and the #PoorPeoplesArmy is organizing to take it back by practicing the politics of love. Coronavirus or not, we are moving forward in an army led by the poor. Capitalism has buried our loved ones for years. It’s time we bury it.

AG: What if the convention’s canceled, as seems likely right now?

AG: OK. I want to close by sharing links to videos about your work in Kensington and beyond that you showed at the Green Party Convention in 2016. Readers can watch them here: “The Philadelphia Story” and “Homeless Hero.” [Watch them below.]

CH: Thank you too.