War with China: a propaganda delusion 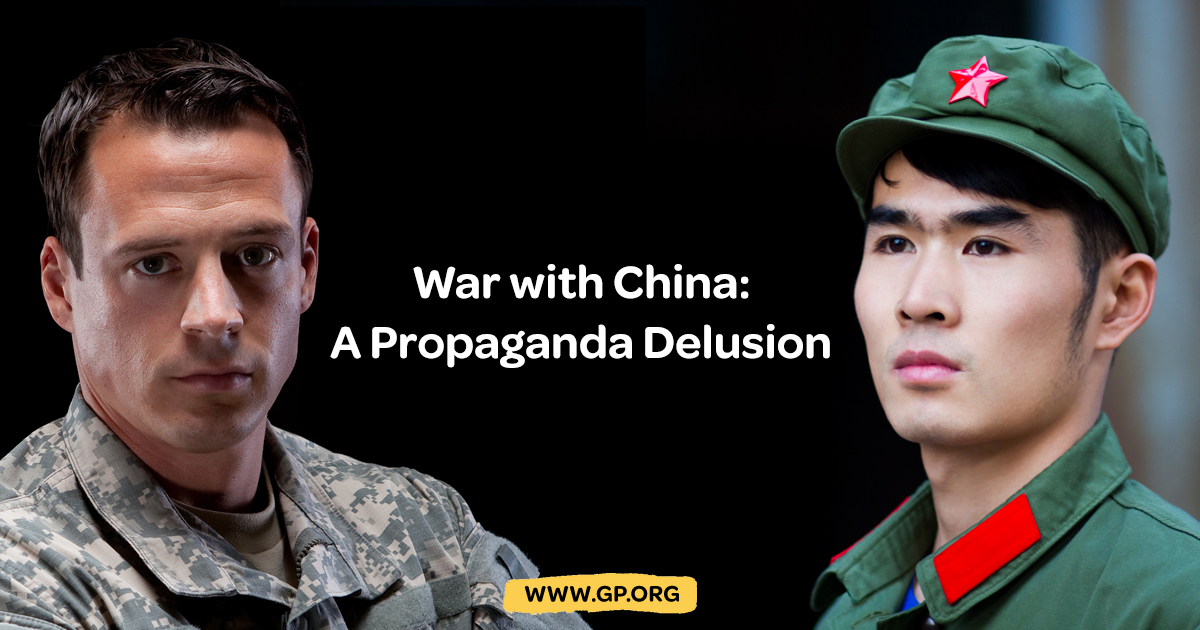 A dangerous delusion has taken hold in US political and media circles regarding the prospect of a war with China. In order to avoid the calamitous outcome that would ensue from such a war, the public should be aware of the historic and technical facts that argue against such folly. The following discussion will provide this information and explain the perverse incentives motivating US business, political, military, and media elites in their efforts to present China as a hostile power that must be confronted militarily.

China emerged as a powerful modern state after a long period of suffering at the hands of exploitative foreign powers (1840-1945) followed by a bitter civil war (1937-1949), and a major war against the US in Korea (1950-1953). Adding to the challenges of repeated warfare was the internal political turmoil of Mao Zedong’s Great Leap Forward (1958-1962) and the Cultural Revolution (1966-76). Only after the death of Mao in 1976 did China adopt a political system that enabled rapid modernization and economic growth, resulting in China’s emergence as a major world power.

Unlike the United States, which has not experienced the suffering of war on its own soil since 1865, the Chinese have a long history of episodic bloody conflict, external and internal, covering the last century, including border wars with Russia, India, and Vietnam. China is not a nation that backs down from war if its vital interests are threatened.

The large and rapidly growing Chinese economy, which is on course to surpass the GDP of the United States within the next 10 years, has enabled China to modernize its armed forces. China has a small but potent nuclear deterrent, a Navy with more ships than the US, and a large, well-equipped standing army double the size of that of the US. Although the US military has many high-tech advantages, such as stealth technology and naval aviation, the Chinese have developed offsetting advanced weapons systems, such as precision-guided ballistic missiles capable of sinking warships.

China views the reunification of Taiwan with the mainland as the most important unfinished business of the restoration of China to its historic position as the dominant power in Asia. US support of Taiwan, the break-away state established by the defeated faction in the Chinese Civil war, is a major point of contention between the two nations, and a possible cause of armed conflict. The other likely cause of conflict is territorial claims over the waters of the South China Sea, an area encompassing strategic waterways and rich with natural resources. Forcible attempts by the US to block Chinese unification with Taiwan or occupy islands claimed by China in the South China Sea would likely trigger a war. What would this war look like?

The Realities of War with China

Americans have grown accustomed to swift initial victory in warfare against weak adversaries, such as Iraq and Afghanistan, but the US has not fought a war with a peer power armed with equivalent weaponry since 1945. Thus, the US risks encountering serious unfavorable technical and operational surprises should it undertake a war with China. Although military planners make estimates of adversary capabilities in simulations and exercises, the test of combat is the final determinant of outcomes. No one in the US military knows if the Chinese missiles designed to sink US aircraft carriers can do so in a shooting war, and no one knows if the complex logistics infrastructure required by US high-tech weapons deployed in the Western Pacific can survive in a high-tempo combat environment. Why, then would US leaders contemplate such a war?

There have been many historical instances of outdated military thinking leading to catastrophe. Perhaps the most terrible is that of WWI, a conflict that resulted in far more carnage than political and military leaders expected. On the eve of WWI, there was enthusiasm on all sides for what was expected to be a short and decisive war. The opposing generals has clever plans for swiftly defeating their adversaries. What they failed to understand was the radical transformation of the battlefield that advances in antipersonnel weaponry would cause. The devastating effects of massed artillery and machine gun fire would result in infantry casualties in the millions and a bloody, exhausting war of attrition that left deep scars in European politics and created the conditions for WWII.

What is known about a potential war with China is that the logistical constraints imposed by geography overwhelmingly favor the Chinese in a war fought off their coast against an adversary from other side of the Pacific. In such a war, the US would be heavily reliant on a small number of Western Pacific bases such as Guam and Okinawa. These bases are likely to be attacked and destroyed in the early days of hostilities, leaving US naval forces stranded with uncertain prospects of support from nervous Asian allies. Long-range stealth bombers flying from the US could inflict some damage on China, but the sortie rate (the number of strike missions flown) would be too low to be decisive.

The Chinese, on the other hand, could swarm Taiwan and the South China Sea with naval and aviation assets, absorbing heavy losses and still sweep US forces out of the theater. At that point, escalation to a nuclear exchange would be the only remaining military option for the US, but the relatively small Chinese nuclear force would still be capable of destroying dozens of US cities, an unacceptable outcome for any sane US President.

The general public is poorly informed regarding the characteristics of modern missile warfare. Despite decades of costly efforts to develop missile interceptors, the US has not been able to overcome the basic problem of missile defense. The defender must protect all vulnerable assets with costly systems that can intercept a high percentage of incoming missiles, but the attacker can make concentrated attacks selectively, using surprise, decoys, and overwhelming numbers, to score precise hits that damage or destroy targets. (This imbalance was demonstrated recently in successful missile attacks on Saudi petroleum facilities and US airbases in Iraq.) The US simply lacks the resources to put an impenetrable missile defense umbrella over every vulnerable ship, airbase, and supply depot in the Western Pacific, and the Chinese have a lot of missiles to throw against these targets.

The damage to the US from defeat in a war with China would be far-reaching. Apart from the military casualties and material losses, the economic impact of disrupting trade and communications in Asia would be enormous, probably triggering a global recession. The diplomatic impact would likely be the destruction of long-standing US alliances with other Asian powers, including India, Japan, Malaysia, Indonesia, the Philipines, and the Southeast Asian nations

The US Military has conducted many simulations of an armed conflict with China involving Taiwan and the South China Sea, and China wins (at a heavy cost) in most of these exercises, mainly because of geographical and logistical advantages. If war with China is a losing proposition from an analytical perspective, what sustains the delusion?

The Latin expression “Cui Bono” (To whom is it a benefit?) is the name of a method that has been used since ancient times to analyze motives behind political actions. Consider who benefits from sustaining the propaganda delusion of war with China:

Defense Contractors benefit from the incessant arms purchases associated with preparations for war. Because the Chinese can afford to steadily modernize their armed forces, the US defense industry can successfully market new weapons to counter actual and perceived advantages in Chinese weaponry. The US defense industry has enormous political influence because of large campaign donations and support for institutions and academics promoting bellicose foreign policies.

Politicians benefit from Xenophobia and war fever, particularly if there is a racist component involved. In WWII, the US had no compunction in putting Japanese Americans into internment camps, while German Americans were left unmolested. By depicting the Chinese as totalitarian Communists bent on world domination, politicians can easily whip up war fever among a large segment of the electorate. President Trump has already begun building up anti-Chinese sentiment by referring to COVID-19 as the “China Virus.”

Media Corporations benefit by generating Internet clicks and TV ratings from an audience excited by wars and rumors of wars. Danger and violence sell, and tensions threatening a major war are a sure winner for elevating viewership. The concentration of US media power in a handful of major corporations makes it easier for governments and arms makers to influence “news” coverage in a bellicose manner. Government-friendly US media companies now routinely employ ex-military and former intelligence agency personnel as commentators on foreign affairs, thus strengthening what is effectively a pro-war propaganda collaboration with the national security establishment.

The above players are engaged in an alliance of convenience to promote a war that cannot be waged successfully. Nevertheless, by keeping the danger of this delusional war before the public, they succeed in selling costly weapons, advancing military careers, winning elections, and earning media profits.

The rational arguments against the US engaging in a war with China are overwhelming, and it is only the power of the US political/media propaganda apparatus that has given this idea public credibility. Perverse incentives motivate arms makers, politicians, the military, and media leaders to sustain this delusion and run the risk of the accidental or intentional outbreak of a war which would have ruinous consequences for the US. Citizens should act to persuade their leaders to stop the drum beat of war before a propaganda delusion turns into a military disaster.

Haig Hovaness is Secretary of the Peace Action Committee (GPAX)