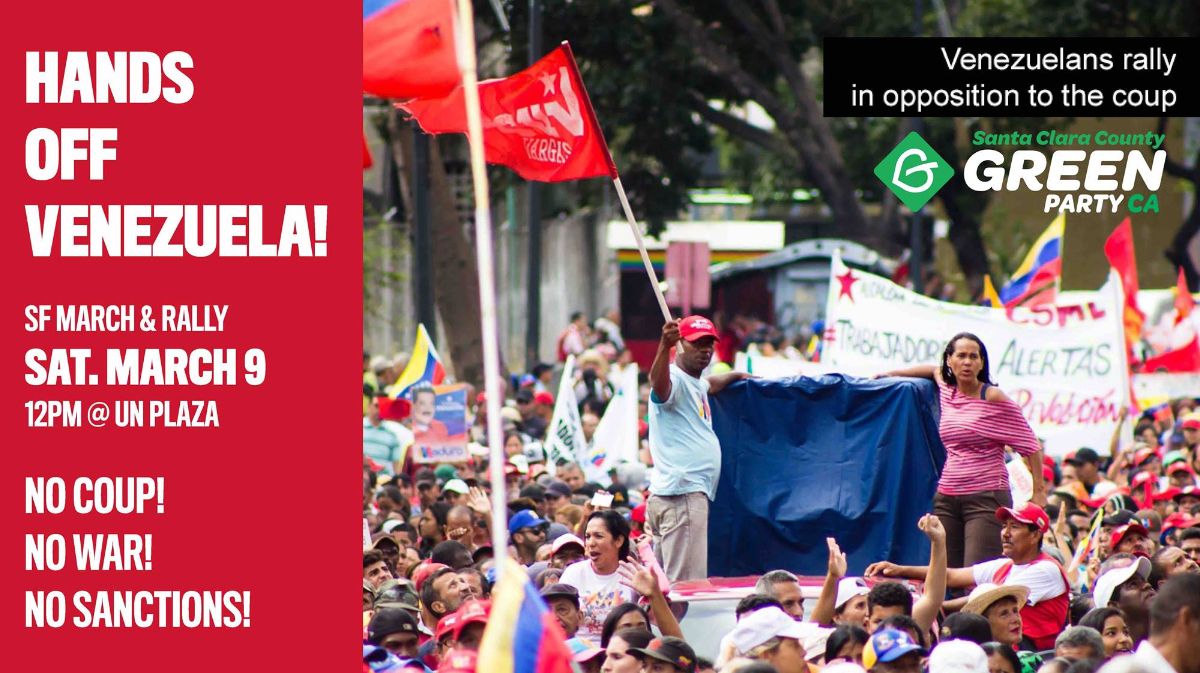 Join the Santa Clara County Green Party and allies on March 9 for a march and rally against the Trump administration’s effort to engineer a coup in Venezuela and a new devastating war there.This march is initiated by ANSWER Coalition - Bay Area The San Francisco action will be held in conjunction with the National March on Washington on March 16.

BRING YOUR OWN SIGN!
• No U.S. Coup d'état in Venezuela!
• Democratically Elected President Maduro!
• US Hands Off Venezuela!

With almost every Democrat, Republican and Independent pressing for so-called "humanitarian aid" from the US to enter Venezuela and calling president-elect Nicolas Maduro illegitimate (to put it softly), it's time for a fact check.
Our Green Party member Geordie Zapalac has written a detailed report about the Venezuelan crisis. He shares with us his findings about the origins of the economic and political crises, from planned shortages to induced inflation to the false assessment of irregular elections, and his own recommendations for legislation to end the illegal economic war against Venezuela. The report is well documented with various excellent references.

Excerpt: "The economic war against Venezuela is conducted largely by proxy using transnational companies that operate in Venezuela or banks that extend credit to Venezuela. The three most important tools used for economic warfare against Venezuela, listed in order of their importance, are manipulation of the foreign exchange rate to induce inflation, planned shortages, and the assessment of country-risk by financial institutions. The drop in oil prices, often touted in the press as the primary factor for the collapse of the Venezuelan economy, is believed by Prof. Curcio to be of marginal importance compared to the three tools of economic warfare listed above."

The full report is available here.

The March for Fossil Fuel Freedom:
A 34-mile walk to Expose Oily Wells!

Wells Fargo Bank has a dirty-energy secret: it’s a leading lender to the fossil-fuel industry. That’s why a coalition of supporters  – including the Santa Clara County Green Party – is participating in a campaign targeting San Francisco-based “Oily Wells” and marching 34 miles, from Palo Alto to San Francisco.

Join us at our stagecoach stop on Saturday, March 16 and enjoy refreshments & snacks, and talk about how our economic, environmental, social welfare, and foreign policies are all tangled in the web of corporate greed.

There will be 12 “stagecoach stops” along the way – one for every year that remains to take urgent action on climate change – and marchers will arrive at the bank’s world headquarters just in time to crash their annual founding day celebration.
Learn more and RSVP HERE.

Join fellow Greens to help this local non-profit organization that works to make the Bay Area a place where no one will ever again have to live, sleep, or eat on the floor. RSVP

Join the Santa Clara Greens for a fun afternoon of packing groceries for seniors and families at the awesome Sunnyvale Community Services. RSVP

Join the Santa Clara County Green Party for our monthly meeting to learn about our plans and activities. We are building the Party for the 99% and need your help to bring our message of peace and democracy to our community. RSVP

Webinar: Digital Organizing Tools for Campaigns
Tuesday, March 12 at 6 - 7:30 PM
In this workshop, GPUS will look at various tools and services that can help in different areas of electoral campaigns and grassroots organizing. Prepared by the Coordinated Campaign Committee. RSVP