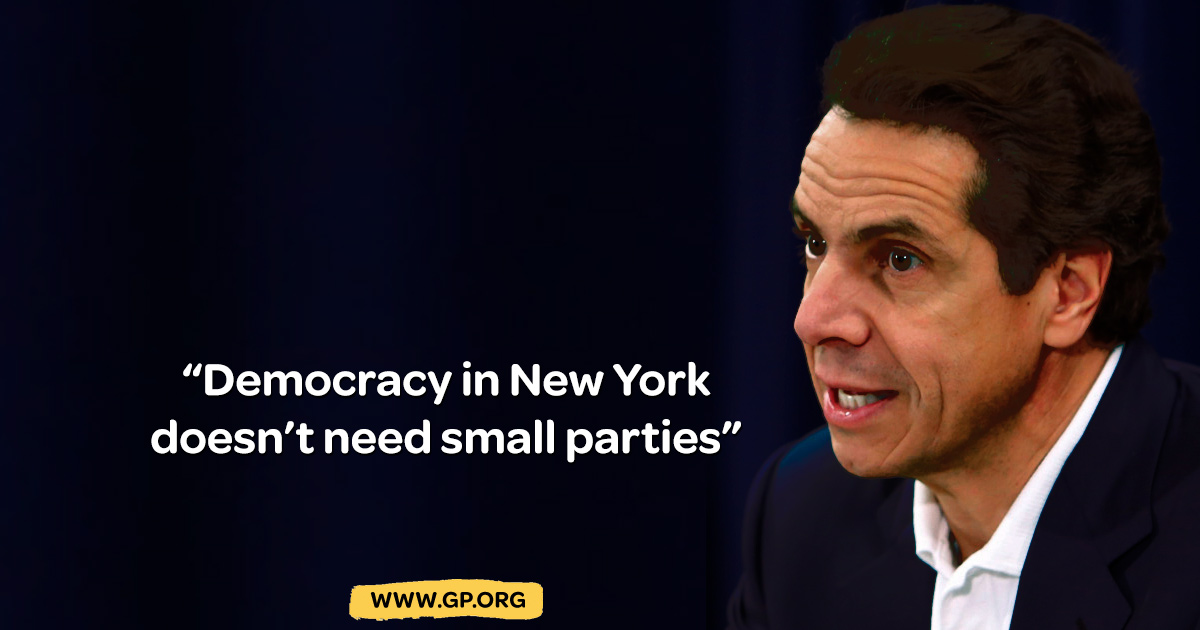 The creation of the Public Campaign Financing Commission has been a rare chance for New Yorkers to have a robust discussion on how to eliminate very wealthy people’s disproportionate influence on politics and expand democratic choice. Unfortunately, recent statements by Gov. Cuomo, his appointee Jay Jacobs and former Gov. David Paterson show the commission has perversely become a cudgel with which to attack smaller parties while defending major parties and incumbents.

The concerns raised by all three men are broadly similar: Public financing is expensive, fusion will increase the expense, it is too easy to become a ballot-status party and more groups will aim to do so in order to receive public campaign funds; thus, the threshold for access to funds must be high and requirements to become a party must be raised in order to weed out most third parties.

Each of these arguments is flawed, and flawed in a way designed to persuade voters we cannot enact a system of broad public financing and have multi-party democracy. Because the governor and his allies control the commission, those concerns will have real political consequences.

First, public financing is not too expensive. The $100 million fund for campaign financing proposed is less than 1% of the state budget, which amounts to a very good deal for a less corrupt government.

Instead of matching funds, which do little to address private inequities in funding, we support the “clean money” system whereby candidates receive a competitive, equal lump sum grant after collecting a small amount of in-district donations and foregoing private funds. It’s cheaper, hits at special interest control, and increases electoral competitiveness. If Maine could afford such a fund, and see 80% of Democratic state legislature candidates and 42% of Republicans use the system last year, New York can go down the same road.

We must also remember that, contrary to Cuomo, Jacobs’ and Paterson’s claims, it is extraordinarily difficult as a new party to successfully petition for, acquire and maintain a ballot line in New York. To do so means collecting 15,000 valid signatures — usually closer to 30,000 to be safe — in six weeks, with at least 100 signatures from half the state’s Congressional Districts, then winning 50,000 votes for a gubernatorial ticket, which is an arduous task.

The Green Party had ballot status from 1998-2002 but lost it from 2002-2010. Libertarians tried and failed for multiple cycles until 2018. 50,000 votes is roughly 1% of the vote in most gubernatorial elections, which is a fair measure of support. While we believe this should be expanded to allow any statewide office reaching 1% of the vote or 20,000 enrollees, recent objections to the current threshold smack of a cartel angry at a modicum of competition. There should be more, not fewer choices on the ballot.

Finally, the governor and his allies have argued that primaries would become a problem with public funding and fusion voting coexisting. The Green Party supports a fusion ban as has been discussed by the commission precisely because it would force parties to run their own candidates, thus increasing democratic choice. Banning fusion also makes sense as third parties do better in states without it. Yet there is no reason even with fusion that public funding would be a problem.

It isn’t in New York City, which has had matching funds for decades. Nor has it been a problem in the 13 other states where some form of public financing is available. Equal funding for candidates that reach the qualifying threshold, regardless of party, is part of properly functioning public campaign finance, and it would again reduce private influence on elections and increase competitiveness.

The Public Campaign Financing Commission should be part of a broad statewide deliberation on how to improve and expand democracy in New York. That it is instead a conversation about how to limit access and choice shows us exactly what the governor thinks about democracy.

Peter LaVenia is co-chair of the Green Party of New York.