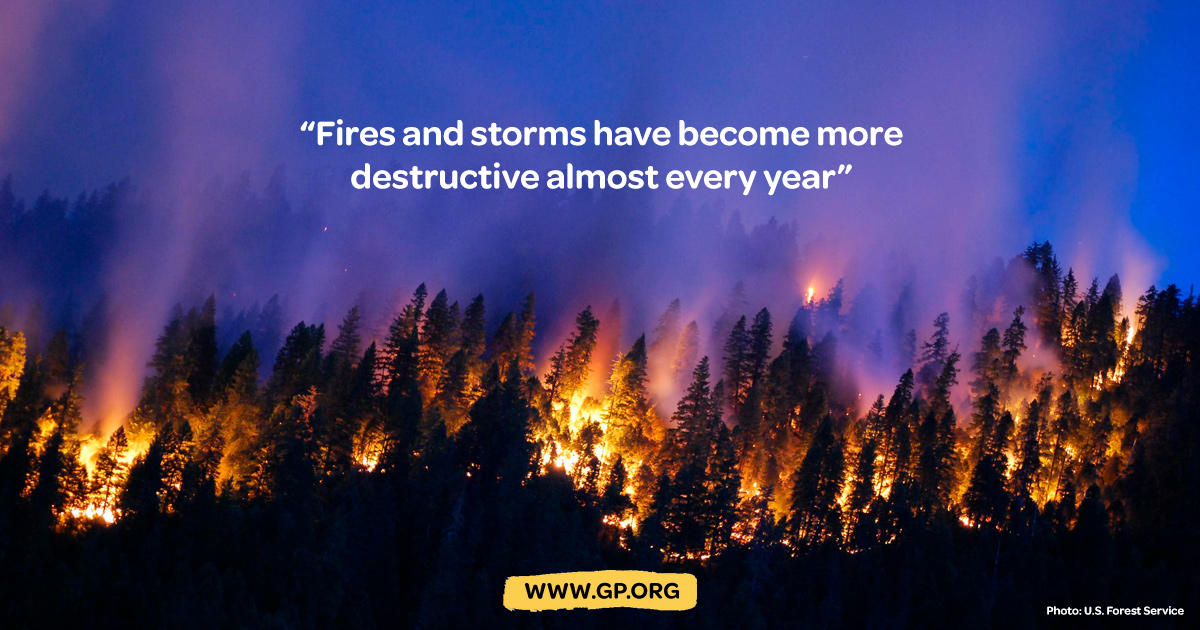 In 1970, Joni Mitchell recorded the song, "Big Yellow Taxi." "Don't it always seem to go / That you don't know what you've got til its gone. / They paved paradise, put up a parking lot."

In 2018, the town of Paradise, and much more, burned to the ground.

In California, large, devastating fires are being called the new normal. "The world's leading climate scientists have warned there is only a dozen years for global warming to be kept to a maximum of 1.5C, beyond which even half a degree will significantly worsen the risks of drought, floods, extreme heat and poverty for hundreds of millions of people," reports the Guardian.

Twelve years! How will we respond?

During the 1930s Great Depression, "New Deal" programs were implemented to restore the prosperity of Americans. In 2007, journalist and author Thomas Friedman wrote about the need for a "Green New Deal" in the New York Times. He advocated moving away from fossil fuels to renewable energy.

I'm glad that Green New Deal legislation will be introduced in Congress in 2019. However, I'm disappointed it won't be introduced by a Green. With Democrats controlling the House of Representatives for the next two years, I'm also glad that the Select Committee on Climate Change will meet again. The national debate will increase public awareness about the crisis and may spur more action at a state and local level.

The Green New Deal is part of the platform of the Green Party of the United States.

The Green Party supports worker's rights, including the right to a living wage, to a safe workplace, to fair trade, and to organize a union at work without fear of firing or reprisal.

Greens are advocates of the right to quality health care, which will be achieved through an Improved Medicare-for-All program.

The right to a tuition-free, quality, federally funded, local controlled public education system from pre-school through college is in the Green Party platform, too. Forgive student loan debt.

So is the right to decent affordable housing.

We have 12 years to make major changes in how we live. Fires and storms have become more destructive almost every year. We must stop burning fossil fuels.

While Congress debates climate change, progress is being made in other parts of the world. Norway has banned the sale of fossil fuel cars starting in 2025. Gasoline and diesel cars will be banned in Britain in 2040. According to a report by Bloomberg New Energy Finance, electric buses will account for 84 percent of all buses sold by 2030. Cities around the United States have pledged to lead on climate change mitigation efforts even as our federal government attempts to take us in the other direction.

Individuals are also taking action. I have friends who took out the gas appliances in their home, converting it to all electric, powered by solar panels on the roof. I'm working to do the same for my home. More public programs are needed to subsidize solar panel installations on every roof and to assist poor communities and developing countries around the world.

Walking, riding a bike or taking public transit instead of driving is something I do almost every day. Every year, I try to eat less red meat and more vegetables. (Beef production is a major source of greenhouse gases.)

In addition to work on reducing your carbon footprint, I hope you will check out Green Party candidates when you see them on your ballot. Even better, I hope you register to vote with the Green Party and that you will help the party grow.

Unlike many Republicans and Democrats, Greens do not take corporate donations to support their campaigns. Our candidates remain unfettered to advocate for their constituents and the planet without the need to make a return on investment for corporate donors.

What are you doing to reduce your carbon footprint? I'll write about your efforts to reduce climate change in a future column.

Barry Hermanson is a member of the San Francisco Green Party County Council and a former small business owner. Email him at [email protected].