Will a Biden foreign policy make a difference for the world? 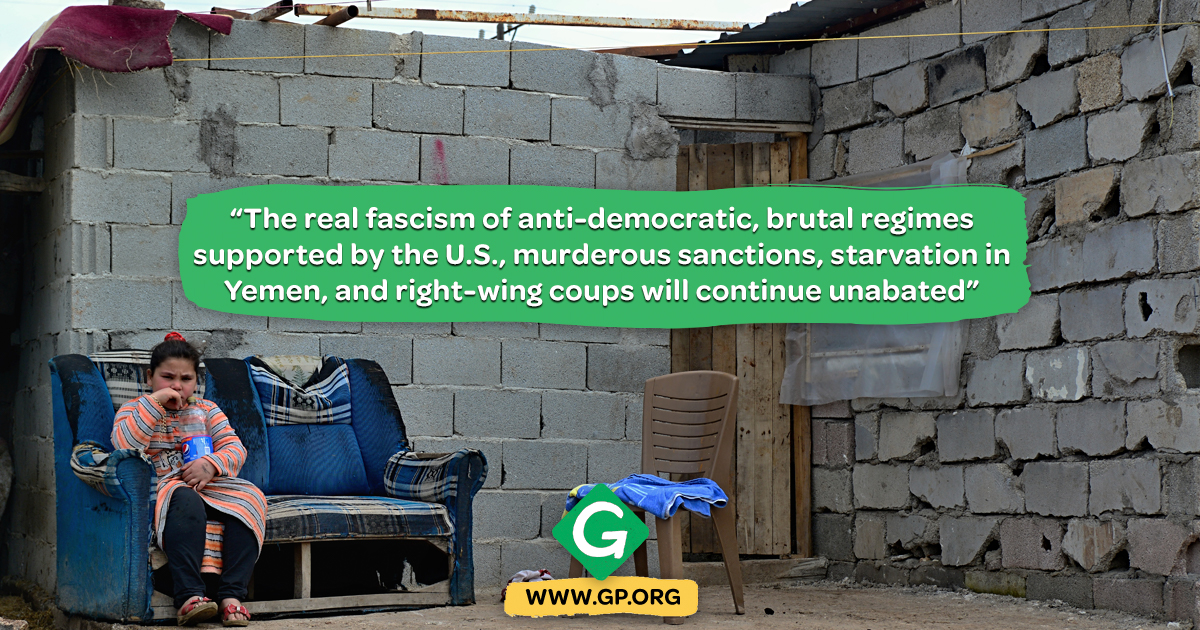 For the people of the world the real fascism of anti-democratic, brutal regimes supported by the U.S., murderous sanctions, and right-wing coups will continue unabated.

The "left" rationalization for collaborating with the neoliberal wing of the Democrat Party is premised on the argument that a win for the national Democrat candidate translates into better possible policy outcomes for the "people" and nation. More importantly though, they assert, Trump's defeat will alter the rightist trajectory of U.S. politics away from what they refer to as Trump's neofascist inclinations.

I will not attempt to address this argument here. I have dealt with this cartoonish and idealistic conception of fascism in other places. I have also raised questions with my friends in the left regarding the basis of their confidence that Biden and the neoliberal class forces he represents are in possession of any ideas or policies that will address the irreconcilable contradictions of the late stage of monopoly capitalism known as neoliberalism.

Of course, on this last question, the response from my materialist friends is sentimental gibberish about holding someone's feet to the fire.

Here I just want to briefly focus on the very simple question that many in the global South are raising in connection with the upcoming U.S. elections. And that is, if Biden wins, what might the people of the global South expect from a Biden Administration? To examine that question, I believe that the Afghanistan situation and the process for arriving at the current peace talks between the Taliban, the Afghanistan government and the United States offers some useful indicators for how that question might be answered.

Defying the popular conception of Republicans as the party of war, and to the surprise of an incredulous Democratic Party and liberal media, candidate Trump told his supporters and the world that pulling the U.S. out of "endless wars" would be a major priority for his administration if elected.

This claim was mocked by the Clinton campaign partly because it upset the carefully constructed narrative prepared by her campaign to paint Trump as a dangerous pro-war threat because of his inexperience and unstable character. Not that the Clinton campaign was projecting itself as anti-war, especially with the powerful pro-war economic interests that were coalescing around her campaign. Objectively, there was a ruling class consensus that increased spending on the military and militarism was going to be a central component of U.S. global policies going forward. Trump's rhetoric was seen as a threat, even if he was not serious about following through once he became president.

After Trumps' surprising win and before he could focus on addressing Afghanistan and the reinvasion of Iraq that occurred during Obama's second term, a manufactured crisis with Syria was presented to him that politically required a military response.

"Trump's rhetoric was seen as a threat, even if he was not serious about following through."

The box in which his generals and the intelligence agencies placed him on Syria would characterize the contentious and contradictory relationship between Trump and those elements of the state throughout his presidency, even after he signaled his support for militarism with the submission of record increases in military spending.

From North Korea and NATO to withdrawing U.S. personnel from Syria, the Democrats and some members of his own party conspired to oppose any changes that might threaten the deeply entrenched agenda of the military-industrial-intelligence complex.

However, the efforts to undermine any progress toward extricating the U.S. from the 19-year quagmire of Afghanistan on the part of Democrats represented a new low in cynicism and moral corruption.

The Normalized Quagmire of Afghanistan

Shortly after the Trump Administration began, it broke with longstanding policy of not talking directly to Taliban. Administration representatives engaged in a series of covert, but direct talks, without the knowledge and participation of their supposed ally, the Afghan government.

By early 2019, the Administration's Special Representative for Afghanistan Reconciliation, Zalmay Khalilzad, initiated a series of overt direct talks with the Taliban in Doha. The government of India and many elements within the foreign policy establishment were either opposed to direct talks with Taliban or were reticent.

In those talks, Khalilzad had to address the Taliban's demand for complete withdrawal of U.S. troops and the U.S. demand that the Taliban guarantee that Afghanistan would not be used as a base for terrorism.

Other important issues that had to be included in a framework for discussion and eventual agreement included the issue of a ceasefire, prisoner exchanges and the sensitive issue of inter-Afghan talks, because the Taliban did not recognize the legitimacy of what they saw as a U.S. puppet government.

The talks with the Taliban, and an important meeting in Moscow in April 2019 between the U.S., Russia and China, resulted in an "agreement in principle" announced at the end of August 2019.

It was agreed in principle that the issues of a U.S. withdrawal, a ceasefire, and the knotty issue of inter-Afghan negotiations would be discussed in a follow-up meeting to be scheduled for Feb 2020. A significant diplomatic victory that was largely ignored in the U.S. press.

"Many elements within the foreign policy establishment were either opposed to direct talks with Taliban or were reticent."

The February 2020 meeting in Doha resulted in a signed agreement to engage in a peace process.

The agreement reflected the various steps that the Taliban, U.S., and Afghan sides were expected to address during the negotiations: The U.S. demand that the Taliban are to prevent their territory from hosting groups or individuals who might threaten the U.S. and their allies; the Taliban demand for a timeline for the withdrawal of all U.S. and coalition forces; and the commencement of talks between the Afghan government and Taliban forces at the conclusion of U.S. military withdrawal and the establishment of a comprehensive cease-fire.

On March 10, the UN Security Council gave the U.S.-sponsored resolution supporting the deal their unanimous blessing. But that was not the end of the story. Unfortunately, for Democrats, peace and a diplomatic victory for Trump had to be contested.

Powerful forces in the state and foreign policy community opposed the February agreement. Publicly, they couched their concerns in security terms related to terrorism. They argued that it is only through increase military pressure that the Taliban would denounce al-Qaeda and agree to verifiably sever links with the group.

But the terrorism concern was only a subterfuge. President Ashraf Ghani of Afghanistan, along with his close Indian allies, did not want to see any U.S. military withdrawal. Other elements in the U.S. state were focused on the estimated one trillion dollars in precious metals that are currently unexploited in that country. And there was the Chinese issue and their Belt and Road initiative (BRI). Maintaining U.S. forces in the region would not only potentially make those precious resources available to U.S. companies but would also serve as a block to the BRI path through Central Asia.

Those elements and President Ghani were in a panic. National reconciliation and peace represented a real threat to their interests. The solution? Another domestic psyop.

By the end of June, a disinformation campaign was launched by New York Times and was quickly followed up by the Washington Post and Wall Street Journal that focused on lurid but unsubstantiated reports of the Russians paying bounties to Taliban soldiers to kill U.S. personnel.

In typical fashion, "anonymous sources" were quoted. The reasons why the Russians would engage in this activity and why the Taliban, who had essentially defeated the U.S., needed further incentives to fight the U.S. were marginal to the story. It was the headlines that were needed in order to evoke the emotional and psychological response that good propaganda has as its objective. Reason is a casualty when the objective is short-term confusion.

In this case, the objective was to evoke an outcry from the public, to be followed with legislation undermining Trump's ability to withdraw U.S. personnel from the country and if possible to scuttle the process until after the election, if at all.

On cue, Democrat Congressman Jason Crow teamed up with Republican Congresswoman Liz Cheney (daughter of the former vice president) to prohibit the president from withdrawing troops from Afghanistan.

And when Trump refused to take the bait and undermine his own peace process, Joe Biden accused Trump of "dereliction of duty" and "continuing his embarrassing campaign of deference and debasing himself before Vladimir Putin."

On September 12th, despite the machinations of the Democrats and other state forces, the Taliban and Afghan government representatives met in Doha to enter the difficult discussions on how to finally bring a resolution to the U.S. war and occupation of their country.

Neoliberals accuse Trump of cynically calculating every decision based on his own needs while neoliberals only operate from a pristine moral position. According to CNN, the peace agreement "was signed in February — at all costs with the goal of helping Trump fulfill his long-stated campaign promise of removing American troops from Afghanistan."

If Trump was only concerned about his reelection, and there is no doubt that was a major consideration for most of his decisions, how do we characterize the moves made by the corporate press in collusion with the Democrats and Biden campaign — an objective concern for the security of the U.S.?

But one story that can be reasonably argued is that for the people of the world subjected to U.S. state criminality, the reoccupation of the Executive Branch by the Democrats will not bring any change in U.S. behavior. Both parties support the imperatives of U.S. imperialism reflected in Trump's 2017 National Security Strategy that centers an adversarial relationship with Russia and China and committed to maintaining U.S. global hegemony. Both parties supported the obscene increases in military spending, with Biden promising that he will spend even more!

The rightist character of the Democratic Party is such that at their national convention the alignment of right-wing neocons and neoliberals is not even being hidden.

So, while the fear is supposed to be around a further growth of "fascist" forces represented by Trump domestically, for the people of the world the real fascism of anti-democratic, brutal regimes supported by the U.S., murderous sanctions, starvation in Yemen, and right-wing coups in support of fascist forces in Honduras, Brazil and Venezuela will continue unabated.

This is precisely why from the perspective of oppressed nations and peoples' in the global South, it should not be surprising that some might see progressive and radical support for either colonial/capitalist party as an immoral and counterrevolutionary position.

Ajamu Baraka is the national organizer of the Black Alliance for Peace and was the 2016 candidate for vice president on the Green Party ticket. Baraka serves on the Executive Committee of the U.S. Peace Council and leadership body of the United National Anti-War Coalition (UNAC). He is an editor and contributing columnist for the Black Agenda Report and contributing columnist for Counterpunch. He was recently awarded the US Peace Memorial 2019 Peace Prize and the Serena Shirm award for uncompromised integrity in journalism.