The Wrath of Ida and the Bliss of Gaia 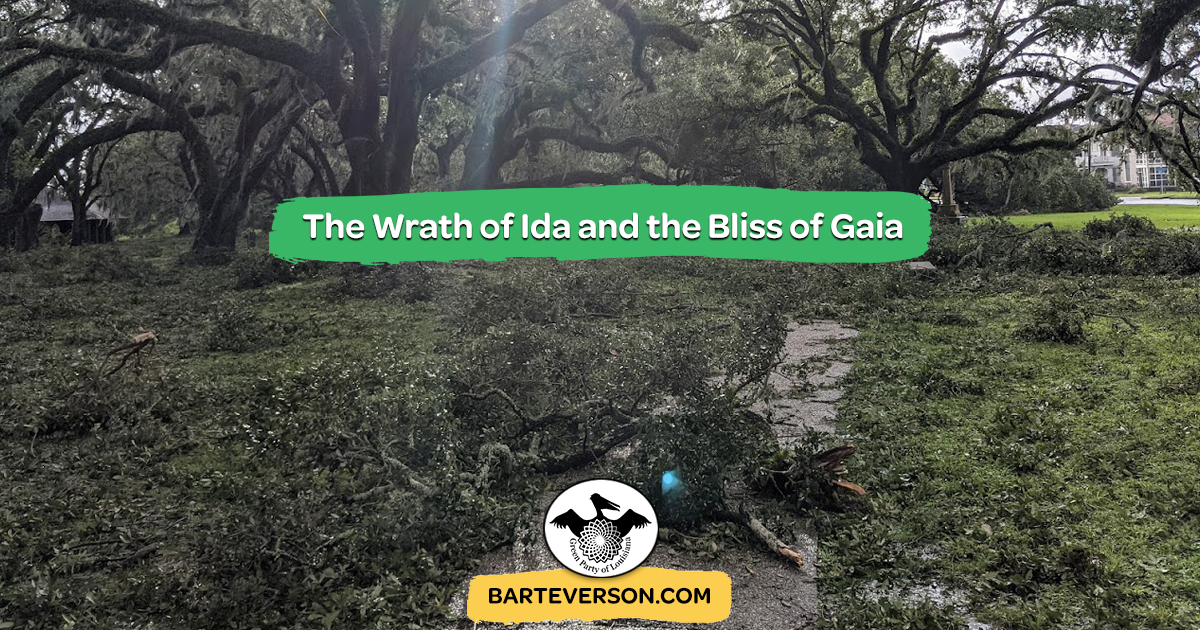 A little something different this week. Below you'll find an essay I wrote just as soon as my lights came back on after Hurricane Ida. It was published earlier this week on Gaianism.org and quickly republished on three other sites. I thought you might like to read it too. As far as the campaign goes, we are resuming our team meetings and "meet the candidate" drop-in sessions via Zoom.  Now I've got to run off and make an appearance before the Orleans Parish Republican Executive Committee! — Bart Everyone

Experiencing the Wrath of Ida and the Bliss of Gaia

If only my back didn’t ache, I could really enjoy this hurricane.

Such were my thoughts as the outer bands of Hurricane Ida bore down on my home in New Orleans. I was sitting in our kitchen, watching the trees in the backyard bending to the tropical-storm force winds. The kitchen area was crowded with all the outdoor furniture I’d brought inside. That’s why my back ached: I’d overextended myself preparing for Ida the day before. The basic rule is: don’t leave anything outside that can turn into a projectile.

The pain in my back was nothing compared to the pain I knew Ida would bring. It might seem perverse, at best, to think about enjoying a storm that deals death and destruction. Ida strengthened rapidly as she moved across the Gulf of Mexico, because the waters are warmer than ever, because the whole planetary climate is warming up, because of the air pollution produced by Western-style global industrial culture. Scientists say we’ve passed a number of irreversible tipping points, that we’re locked into a hotter future. We can expect more intense storms, which may render communities in southern Louisiana untenable. How could anyone possibly enjoy that?

From the safety and comfort of my kitchen, I watched as the tropical-storm force winds turned into hurricane-force winds, howling gusts which it’s tempting to describe as ferocious. The trees were no longer merely bending, they were whipping, branches snapping and flying through the air. It was easy for me to see why people might think that the gods are angry at such times.

The power went out six times. It came back on five times, quickly, in a matter of minutes or even seconds. But after the sixth time, it stayed out.

There was a loud noise. There were a lot of loud noises, actually, but this one seemed close to hand. Between gusts I ascertained that the TV antenna had been ripped off the roof of our house and was now lying in the neighbor’s yard. A little later I saw a large potted plant rolling around in the nearby intersection. I donned a raincoat and rescued it.

Modern meteorological science has gotten pretty good at predicting the path of large organized storms like Ida, but it’s by no means foolproof. Ida steered a little more straight north rather than northwest, bringing her a little closer to New Orleans than anticipated. She also slowed down and lingered in the area a little longer than we thought she would. After sundown, I was tired, but Ida showed no signs of fatigue. Water was starting to rise in the street, which made me nervous, but I went to bed anyway, upstairs, unsure of what I would find in the morning.

When I woke up Monday, Ida had moved on. The water had receded, and there was debris everywhere, mostly leaves and branches and limbs from the massive live oak trees that line my street.

To my knowledge, there was no flooding of note in New Orleans. In fact, that emerged as one of the big stories of the storm: our flood control system, which failed so spectacularly after Katrina, held up to its biggest test yet. The system received massive investment and improvement—thank you, American taxpayers. Given the current tussle in Washington over infrastructure spending, this all seems especially relevant. After the storm, Time magazine quickly published an article revealing how the Army Corps of Engineers used the most extreme projections for global warming impacts in order to deliver a more robust system.

How much of life depends on the infrastructure we take for granted?

Even as the strength of one system was confirmed, the weakness of another was revealed. Our power grid failed. There are eight transmission lines carrying electricity into town; Ida knocked all of them out of commission. Hurricanes cause blackouts, of course, and I was prepared for an extended outage. However, when Ida knocked a rusty old transmission tower into the Mississippi River, it was widely interpreted as evidence of systemic neglect. Entergy, the “regulated” for-profit utility in charge of the city’s power, was unable to produce even an estimated timeline for restoration of power for several days. (It so happens that I’m running for New Orleans City Council At-Large, on a climate-focused campaign that singles out one top priority: to “hold Entergy accountable.” You’ll find my policy priorities on my website.)

Within a day or two, most of my friends who’d weathered the storm had departed the city, daunted by the prospect of living for days under a heat advisory without AC and no end in sight. Of course, many had evacuated in advance, including two-fifths of my household family. While I stayed home with our two cats, my wife and daughter drove to Indiana the day before Ida’s landfall, and were staying with family there. Now, like so many, they experienced a bizarre mix of relief and remorse, curiosity and anxiety, even guilt.

“Try to have fun,” I told my wife on a phone call. Fun? Who could have fun in circumstances like this? Again my emphasis on enjoyment seemed odd, even to myself. But I did my best to follow this advice. I embraced the disruption. It seemed familiar. Having been through the wringer a few times now, I’ve come to recognize “disaster time” as a species distinct from regular time. In the days that followed, I moved a little more slowly, and I calibrated my activities according to the position of the sun, trying to avoid heat exhaustion. I rested frequently between bouts of clearing hurricane debris and hauling bags of ice home on my bike. I spent a lot more time than usual sitting outside, on my porch, hoping to catch a breeze, and when the breeze came I rejoiced in it. I also spent more time visiting with my neighbors, those who remained, sharing information and food.

Neighborliness emerges in the post-Ida calm

Underneath it all, I attended to something I can only reference obliquely, something for which I lack the vocabulary but which seems of supreme importance. There’s an ineffable joy of being, which permeates all consciousness, or so it seems to me. Perhaps I should call it the bliss of Gaia, because it comes through her, as does everything that makes us what we are. Perhaps Gaia is the local embodiment of some deeper cosmic principle. Such speculations are above my pay-grade. But we can feel this vibrant thrum of joy between each thought, between each breath, if only we relax and remember.

I realize that my testimony comes from a place of immense privilege. I’m aware of the deep suffering all around me, permeating our society and even Gaia, herself. Many horror stories came to light after Ida passed. Eight hundred nursing home residents were shuffled off to a warehouse that flooded, where they languished, some lacking medication, others sitting in their own feces, some dying.

I do believe the bliss of Gaia is available to all, perhaps, even especially, to those in extremis. But to speculate on such matters, and to pursue studies that help me remember this bliss in spite of the many constant glittering distractions and barbed traps of modern life—that is surely a privilege.

Our city was spared the worst of Ida’s wrath. Her swath of destruction ran to our west, devastating smaller communities and perhaps wiping some out permanently. The Indigenous communities of southern Louisiana were hit especially hard. (If you wish to help the recovery effort, I suggest contributing to the Lowlander Center.) Ten people were killed in Louisiana, as a direct result of the storm, with more than twice that number dying from indirect causes after Ida passed. Ida swept northeast and had a severe impact in New York and New Jersey, causing flash floods with an even higher death toll. We’ve often said that Louisiana represents the nation’s climate future, a sort of “canary in the coalmine,” but it was shocking to see this play out so quickly and dramatically in a single storm.

After six days of sweating it out in the dark, I regained power. Even as half a million remained powerless, my life began edging back toward what we laughingly refer to as “normal” in our society. I was able to power up my computer and type out this rambling account. Already the days of heat and darkness seem to take on a dreamlike quality.

As a modern Gaian, I understand the Earth as sacred, even divine. I also understand that I myself am in no way separate from the Earth. That means that I myself participate in this sacred system, that I myself am divine, along with everything else I’ve ever known and loved or even hated, from Hurricane Ida to my aching back. I am Gaia. So are you. It’s just a matter of remembering. And strangely enough it felt like remembering was a little easier during the power outage.

A heron in a road puddle after Ida, perhaps displaced from its preferred roost?