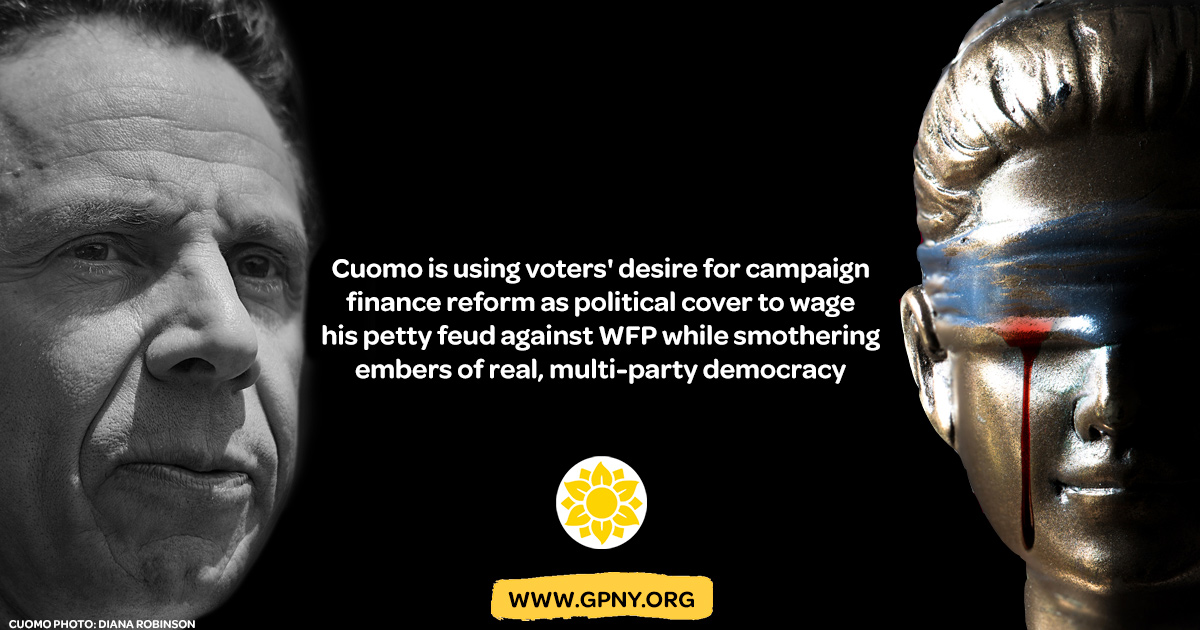 ALBANY, NY 11/20/2019 — Green Party of New York (GPNY) officers said today the Public Campaign Finance Commission is making a mockery of democracy, and it appears their secret plan all along has been a bipartisan effort to eliminate third parties and real competition from New York State politics.

GPNY also claims even the matching funds proposal for partial public campaign financing, as reported so far, will be a disaster for democracy. It is so grotesquely constructed that public funds will actually further entrench incumbents and the influence of big, private donors — the opposite of the Commission's stated purpose and what New Yorkers overwhelmingly want.

"This Commission was created to help limit the influence of private money, which has long corrupted New York State politics. It has instead chosen to find a way to slam shut ballot-access for third parties and to somehow create a system of public financing that will make our political system even more indebted to big money," said GPNY Co-Chair Peter LaVenia. "Thresholds for entry into the matching funds system are far too high, as is the upper limit on individual donations to candidates that qualify for matching funds. Party transfers of soft money to candidates will be allowed, as will carryover of campaign war chests to candidates that opt into matching funds."

"New Yorkers must take action to stop the Commission's desire to raise ballot-access thresholds in a blatant attempt to exclude all third-parties — except the Conservatives — from the ballot. In poll after poll, voters say they want more parties representing more perspectives, not fewer, and experts agree third parties won't burden public campaign financing. It is very clear that a commission — constituted with exactly zero ballot-status, third party representatives — is stacking the deck for Democrats and Republicans alike." said LaVenia. "It is galling for Andrew Cuomo to use voters' desire for campaign finance reform as political cover to wage his petty feud against WFP while smothering embers of real, multi-party democracy that New Yorkers have fought for over generations."

"There's still time for the Commission to reverse course, and we all must unite to pressure them to do so immediately. Otherwise the Legislature must come back into session to reject the anti-democratic recommendations of the Commission and pass real campaign finance and electoral reform," concluded co-chair Gloria Mattera.