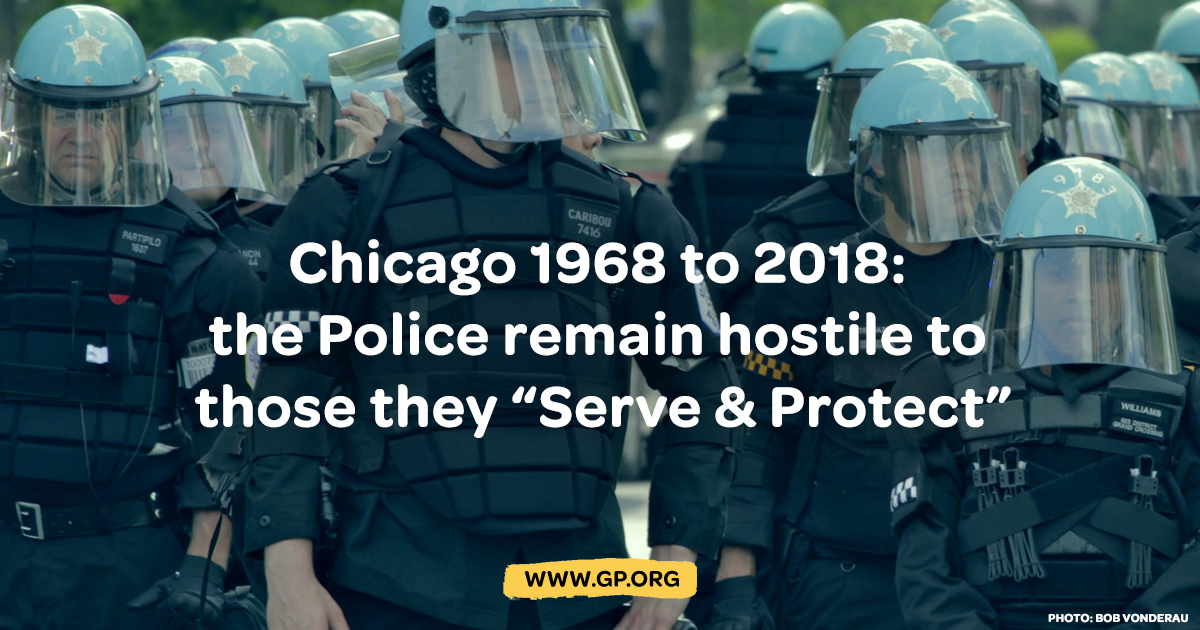 In December 2017, I reached out to anti-war organizers in the Chicago area for the purpose of attempting to reboot the anti-war movement there. I began advocating to hold an action in late August 2018, to mark the 50th anniversary of the Democratic National Convention in Chicago, in which the Democratic Party machine suppressed the movement for peace within its own party and violently attacked it with police on the streets of the city.

This major historic event was a watershed moment in the movement against the Vietnam War. Knowing that the corporate media love to cover these 50-year retrospectives (e.g., the March on Washington, the Summer of Love, etc.), my theory was that a mass street demonstration on the occasion of the 50th anniversary would get better-than-usual media coverage, helping to boost the message that a movement against current U.S. wars is needed today more than ever.

In January and February, I proposed that UNAC make this a major focus for a national demonstration, but the prevailing sentiment was to organize for a national day of actions on April 14th, which did occur. It was a respectful disagreement over strategy, and I cannot say that the focus on April was wrong. UNAC did endorse our August action.  (Thank you!)

In Chicago, we began organizing for both the April and August actions. We formed a fairly broad coalition, called the Chicago Anti-War Coalition (CAWC), in February, which organized the April action in Chicago (held April 21st due to competing events on the 14th). We successfully got a turnout of about 300 people at the April demonstration, which I personally considered disappointing in comparison to the effort put into it, with very little media coverage. However, I understand that this experience was comparable to what other UNAC chapters experienced in other cities around the country.

Shortly before and after the April action, rifts within the CAWC came to the surface. Without getting into all of the disagreements, a number of us felt that the organizing for the event had been hampered by constant criticism and fighting over particular language used in particular pieces of literature or on-line messaging, etc., and revisiting of decisions already made. There was also a major disagreement over a last-minute push to allow a member of the Revolutionary Communist Party to speak at the rally, which many of us regarded as opportunistic and not serving the best interests of the movement. There were also disagreements about the program at the rally itself, which turned into one of those events where practically every participating group had to have a speaker, turning the rally into a kind of marathon event – the end result being that a number of people left before the march even began. It was our assessment that the CAWC had become a coalition that would not be able to attract the kind of support we were trying to garner from other organizations like Black Lives Matter, the Chicago Alliance Against Racist & Political Repression and other groups doing serious work in the city.

Accordingly, there was a split, and I joined with those organizing under the name Chicago Committee Against War and Racism (CCAWR), to build the August action. There is no way to prove with certainty whether we would have been better off staying with the original coalition and trying to make it function better, or whether we made the right call, but I am still of the opinion that we made the right call. The CAWC did endorse our action and made some efforts to help promote it.

We put in a hell of a lot of work trying to build this action, and I think, for the most part, we did the “right” things. Ideally, had the split not occurred, and had we had the luxury of more time, we could have attempted to build a broader coalition, bringing in more organizations on the ground floor and getting them more invested in this project. I recognize this as a deficiency, which I believe needs to be corrected in future organizing. However, after the split, we had a roughly 3-1/2-month time frame in which to get the event off the ground, and the focus had to turn to the actual completion of tasks.

I think the theme of “Unite Against War and Police Violence” was good, and all of our messaging was aimed at reaching out to oppressed communities of color, drawing the connections between war and racism, poverty, police violence at home, and environmental destruction. We made connections to the most affected communities, as reflected in our outreach, distributing thousands of flyers (in English and Spanish) at events like the Bud Billiken Parade, anti-police violence demonstrations, immigrant rights rallies and more. (See this, for example.) We advertised with telephone pole stickers, posters, flyers left at establishments, etc.

We garnered support from the organizations from whom we sought support, with the exception of Black Lives Matter, although individuals within that organization did support our efforts. (I do not know the whole story on this, since I reside in Southern Illinois and did not take the lead in this work, but I know that a serious effort was made and will follow up on this.) This was reflected in our list of endorsers, including the  Chicago Alliance Against Racist and Political Repression, the leading organization in the campaign for the Civilian Police Accountability Council .

Our speakers were also geared to appeal to the communities we were trying to reach. It was an outstanding group.

We had a well-attended press conference to promote the event, which did garner some publicity. We did several press releases leading up to the demonstration.

We spent $650 on Facebook advertising, which, according to Facebook, reached 69,500 people. 270 people reported that they were “coming” and over 1,500 were “interested” – not counting all those who said that they were “coming” or “interested” on some of the other pages where the event was shared. World Beyond War co-sponsored our Facebook event page.

We had at least one person focusing on Twitter, promoting the event through that medium. I am not as familiar with how well that went.

Andy Thayer also did a Herculean job getting us the parade permits to march on the streets of Chicago, secure the permit for Daley Plaza, and dealing with a bureaucratic nightmare to get the necessary insurance coverage for the event, which he accomplished. He once again came through as a real hero of our movement.

We did all of this – and more – and we ended up with, by my estimate, no more than 250 people showing up at Daley Plaza for the rally, with maybe about 220 people in the march. More on that below.

The outcome: Despite the disappointing numbers, some things went very well. The program ran smoothly, and the speakers were outstanding, and focused. It did not drag, and we did not lose anyone from having too long of a speakers’ list. With Andy as MC, and a total of 8 speakers (7 at the rally, one at the conclusion of the march), I think we hit the correct formula for a successful demonstration in that respect.

People can view the entire event captured on video here.

We did get much better than usual media coverage. The quality of that coverage was about what you would expect from the corporate media, but we did get it. An appendix appears below, reproducing some of the articles, with links to others.

I am proud of our efforts and proud of what we did, but there is no getting around the fact that the actual turnout at this event, like the April event, was, in the most literal sense of the word, pathetic. I am not discouraged by this, but disappointed, certainly.

Yes, there are things that we could have done better, and that we will do better in the future – but we did enough things correctly, and worked hard enough, that we should have achieved a much better turnout. Comparable levels of effort in 2003 and 2012 brought a hell of a lot more people out in the streets.

Except for point 5, I realize that none of these are particularly new or profound insights, nor does this exhaust the list of possible explanations, but I think that the results of our efforts more or less proves that these factors were present – and represent obstacles that must be overcome.

Where to go from here

I wish I had some magic answers, but I don’t. If magic answers existed, we would have been successful by now. I do have a few suggestions:

Most of us already recognize, at least in our internal discussions, that militarism and war are rooted in capitalism. While I am not necessarily suggesting that we all run out and join DSA, I do think that getting involved in the current organizing for socialism and a solidarity economy makes sense as part of a movement-building strategy – first, to help ensure that these newcomers to socialism move beyond Bernie-worship and include anti-imperialism and genuine socialist internationalism as a necessary component of their advocacy, and, second, because it is a natural fit.

We don’t all have to agree on our conception of socialism in order to include in our propaganda that the struggle against militarism and war is, inherently, part of a broader struggle to replace capitalism (or at least it must become that). Maybe it’s time for the anti-war movement to publicly and explicitly identify itself as anti-capitalist, or even explicitly socialist, while making room in the tent for different conceptions of what that means. While in prior periods that might have seemed to be overly restrictive and limiting our potential for growth, I am now inclined to think that in the current climate, it would actually enhance our potential for growth.