Santa Barbara is named for the patron saint of lighting and explosive activity. Like its namesake the devastation in the Santa Barbara Chanel rocked the world. It gave birth to the creation of the first Earth Day the following year on April 22, 1970, with 20 million Americans protesting for environmental justice. The United States Environmental Protection Agency was birthed three months later. Sometime around that first commemoration, I, too, was conceived, and born nine months later.

Earth Day is now celebrated in every corner of the planet by billions of people. I can't help but think that the energy of the first Earth day had a role to play in shaping my life's purpose, to learn about and educate people about honoring the diversity of this planet. From the Black Hills of South Dakota to the Himalayas, from the bayous of Louisiana to the Great Barrier Reef, from the Australian Outback to Antarctica, I have traveled the Earth learning to appreciate its wonders, its inhabitants, and its biodiversity.

Like the Santa Barbara oil spill, 50 years later, death and destruction is now also giving birth to something new. A global pandemic has brought human activity to a screeching halt. The songs of birds can now be heard replacing the roaring engines of fossil fueled vehicles. Businesses have been shuttered and waterways have been emptied of boat traffic as humans have been quarantined. Pollution has dropped drastically worldwide. The systems that have had a stranglehold on human life have fallen apart and been revealed as harmful and useless. Humans have begun identifying what is essential. Casting aside norms and conventions, creating new ways of interacting. Mutual aid societies are springing up. Those who care for the sick and dying, those who provide food, and deliver things are heralded as heroes rather than those who kill for oil. A new world is dawning. Author Charles Eisenstein calls this new period a coronation with reference to the corona virus. "Corona means crown," he says, "A novel corona virus pandemic means, a new crown for all of us."

A new world full of love, compassion and restructured around caring for the most vulnerable. A new world that celebrates the dignity of all. Now that is a "coronation," a crowning achievement for humanity!

Whether it's a person in ICU or a fragile ecosystem, whether it's someone on a respirator or the Amazon facing deforestation, we must care for the lungs of the Earth, cherishing, honoring, respecting the air we breathe, the water we drink, the land upon which we live.

The energy around the first Earth Day gave birth to something new and wonderful. It brought many things into existence including me. May the energy around this 50th Earth Day continue to revolutionize the world. May it bring healing, understanding and quality connections. May it bring a deeper respect for the planet fostering not an egocentric way of life but an ECO-centric one where people, planet and peace are prioritized over profit. 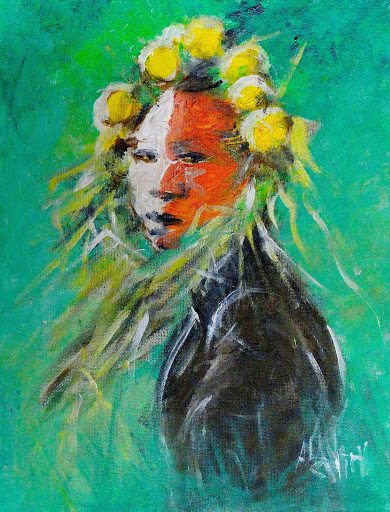 "Natural Beauty,” painting by Alan Smith, of a member of the Omo Valley Tribes in East Africa, who adorn themselves with fruit and vegetation and have a deep connection to the environment.